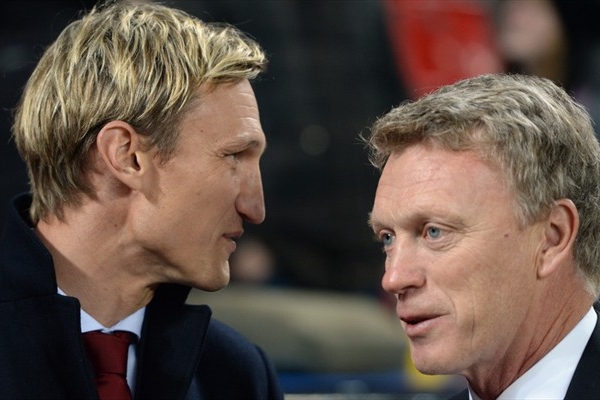 David Moyes was unable to confirm whether Robin van Persie or Nemanja Vidic would be available for Manchester United’s clash at White Heart Lane on Sunday.

Van Persie returned from international duty two weeks ago with issues circulating around his toe and groin, therefore had to sit United’s draw with Cardiff as well as our 5-0 win over Bayer Leverkusen.

When posed the question about Van Persie and Vidic’s fitness, Moyes told reporters: “They’ve got a chance, they’ve all got a chance.” Promising, but even if the Dutchman is sidelined or rested I would like to see Shinji Kagawa played in the number 10 role behind Wayne Rooney as our main striker. That setup against the Germans mid-week made us look more creative and innovative. We didn’t stop after one or two goals, we pushed for more and that’s the way it should be.

Moyes made a number of changes to his side for the trip to Bayer Leverkusen and in this morning’s press conference, he described the victory as our best performance of the season. There is no question about it. Time and time again this season we looked more fearful of losing than wishful of scoring more. In other words, a lot of the football under Moyes has been negative but there has signs that it does not have to be. We have players that are capable of playing attractive football.

“The best is to come and I still think we can continue to improve and progress. We had some little bits of inconsistency at times, which we need to try to do better with, but there have been moments that have shown we are beginning to come right back into form. That is what I hope. Midweek [against Bayer Leverkusen] certainly showed what we are capable of when we are playing well and the job is to do that week in, week out.”

Make sure you keep an eye out for the SN match preview tomorrow morning.