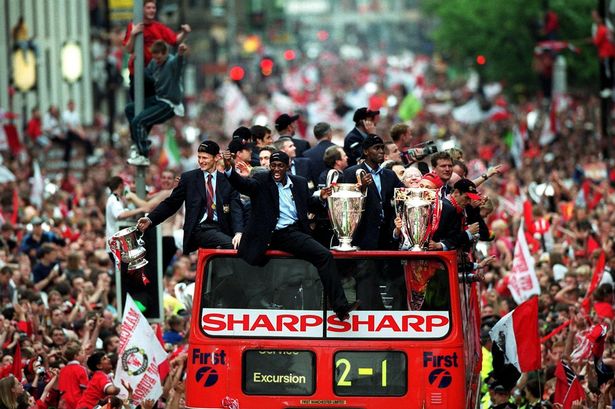 The first United game that I watched was the 1979 FA Cup Final. I slept through it, apparently, though did at least have the good grace to cry and soil my red and white babygro at the end.

My first United memory is probably the 1983 Cup Final replay. My parents went without me, came home regretting it, and presented me with the consolation prize of a rosette. I was able to return the thought before the 2009 European Cup final, dropping one in before I went to Rome.

Then, just before the 1985 Cup Final, United played away to Watford, where, in the tradition of the time, they got themselves walloped – 5-1. My dad sneaked off without telling me, and when he revealed the subterfuge the following morning, received viscous chunks of my mind despite the score; I was not at all placated by the gift of a programme.

Accordingly, it was decided that the time had come to take me, and, at the start of the following season, we went to Old Trafford on August Bank Holiday, for the home game against West Ham. My mum insisted I wore a thick red polo-neck despite the warmth of the day, and we sat on benches at the back of the Stretford End. Beyond Ooooh, Frankie, Frankie, I remember very little about the general experience – beyond, of course, the green of the pitch – because I was entirely obsessed with and transfixed by the football, so remember a bit about that. United played great in the first half without scoring, but early in the second half, some one-touch passing put Hughes in for his fourth in four games. Then Olsen ran round about 17 players and missed, before, not long from time, Strachan intercepted a loose back-pass and scored the clincher. United were still top of the league.

I’ve only ever seen the goals once since – there was no telly coverage at the time because of a dispute between the various arseholes. They were briefly on YouTube, then vanished, but I can still see them in my mind. I was hooked.

Daniel Harris has a new book out called The Promised Land which focuses on the historic treble back in ’99. It is reasonably priced and would make the finest Christmas present, so get your copy from Amazon now. Read an extract from the Guardian.