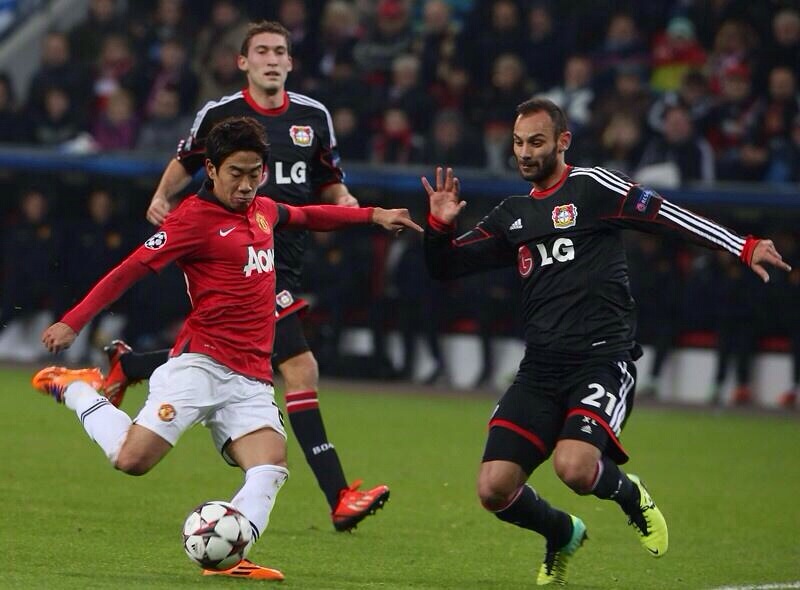 David De Gea- A relatively quiet night at the office for Big Dave. Dealt with most of the set pieces and deliveries, shot-stopping as good as ever. 6

Chris Smalling- Untested by their left-winger, a threat in the opposition box, pressurizing  Spahic into an own goal and tapping in himself after a nice assist from Wayne Rooney. 7

Jonny Evans- Won the battle against Kiessling with ease and popped up at the other to tap in from a yard. He’s looked the part the past 2 years and is carrying on the good form this season. 7

Rio Ferdinand- At times he look composed and then he was caught out of position. Mixed night personally, but still part of a defence which wasn’t breached. Looked his age at times. 6

Patrice Evra- Linked up well with Nani going forward, and defended adequately despite being caught up field occasionally. 7

Antonio Valencia- Tonight was the real Valencia, pace, power, aggression and scored against Leverkusen for the second time this season. He was so offensively minded and his pace was electric at times. More of the same please Tony! 8

Phil Jones- His return tonight was welcome indeed, added bite, energy and acted as an effective shield from their rare attacks. Will need to be wrapped up in cotton wool for Tottenham at the weekend. 7

Ryan Giggs- The man keeps defying football logic. What an unbelievable performance from the man who turns 40 in two days. Kept feeding Kagawa and Rooney, gave us a cutting edge with his creativity and the ball for the fifth goal was absolutely sublime. How long can he go on for? Incredible. 9

Shinji Kagawa- Played in the position he wants to be in tonight in the absence of Robin Van Persie, he did not disappoint. Kagawa was the star of the show, most of our attacking menace was through Kagawa. His combinations with Rooney and Giggs were delightful on the eye and he has a very good chance of featuring there at the weekend. 9 MOTM

Nani- Showed good discipline and work ethic down the left without being too devastating down the left. Still, his well-taken dink to cap off the night will hopefully do his confidence the world of good. Something to build on after his Stoke horror show. 7

Wayne Rooney- His creative juices were flowing tonight, providing the first 4 goals with wicked delivery from set-pieces and showing good awareness to tee up Smalling when he was well-placed himself. Rooney’s been outstanding this season and continues to flourish. 8

Alexander Buttner- Rusty from a lack of action, highlighted by a rash tackle which he was not carded for. Came on to save Evra’s legs. 5

Anderson- Cut through their defence with a powerful run, topped off with a horrible finish unfortunately, which brought laughter and smiles especially when you are 4-0 up away from home. Neat and tidy otherwise. 6

Ashley Young- Barely any time to make a telling contribution, could be the story of the rest of this season. 5