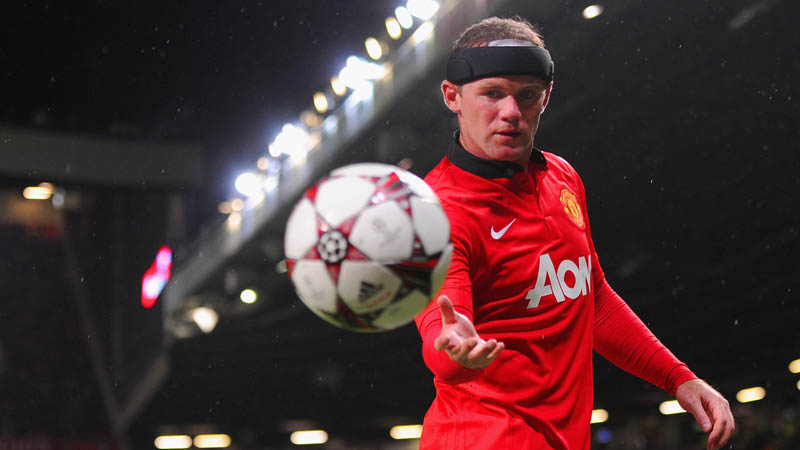 Manchester United stepped into the BayArena Wednesday evening, in hopes to sending themselves through to the knockout stages of the Champions League competition. After a dismal performance against Cardiff City at the weekend, it would have appeared that Bayer Leverkusen would provide instant pressure to the United defense of Chris Smalling, Rio Ferdinand, Jonny Evans, and Patrice Evra; however the hosts began the first half on the back foot and content to allow United the ball.

Ryan Giggs would also make his 138th Champions League appearance with a start in the midfield. Two days before his 40th birthday, Giggsy continued to assert himself as one of United’s best passers and creators. Despite being 40, age is only a number to manager David Moyes.

“We don’t look at his age. We look at his experience. He’s the right player for this stage,” said Moyes.

United defeated Leverkusen 4-2 on Matchday 1, and would show no signs of slowing down Wednesday. With Michael Carrick out with injury, Ryan Giggs assumed the center midfield role alongside Phil Jones with Antonio Valencia and Shinji Kagawa out wide. From the get-go, Kagawa looked lively as he pressed forward from both wide left and a more centralized role as he orchestrated behind Wayne Rooney.

The reds were allowed to move forward with ease as the centre backs turned defense into attack easily. Evans and Ferdinand were able to defend quite easily in the first half as Leverkusen were narrow in their attack. And with Nemanja Vidic still recovering from his concussion, Evans once again showed why he is primed and ready to take over the centre back duties with a few last ditch tackles.

In the first stanza, Leverkusen did have a concerted attack through Kiessling, Casto and Bender, yet to no avail. Evans and Ferdinand, while a bit slow at times stepping up on defense, were gifted with Smalling and Evra being able to pinch in on defense and limit Leverkusen’s mobility atop the penalty area.

United’s first chance came in the 16th minute after Giggs picked a brilliant pass into Nani who bent his attempt just over the far right hand corner. And that was the most of Nani we saw in the first half – aside from a few back heel failed attempts.

In the 18th minute, Leverkusen looked to assert themselves from set pieces against United just as Cardiff did at the weekend.

After the vital tackle in the 21st minute by Evans after Kiessling was allowed to dribble with ease past Ferdinand, the reds would surge forward.

Shinji Kagawa made a darting 70 yard run through the center of the park with the ball at his feet before finding Giggs’ feet. Giggs continued the brilliant move as he found Rooney in space out wide. Kagawa drew both the centre backs to how, allowing for Rooney to pick his pass back post onto the feet of Valencia who tapped United into an early 1-0 lead. The break of pace by Kagawa, leading to United’s goal in the 22nd minute, may have been United’s best movement to date.

Only seven minutes later, United would double their lead off a free kick delivery from Rooney. Rooney’s driven delivery into the box put defender Spahic under pressure, which saw the ball deflect off his head and into the back of Leno’s net.

With Kagawa surging through the park behind Wayne Rooney, it appeared as if he’d discovered a new found confidence on the ball.

In the second half, United’s defense continued to look poised. Smalling looked a bit more comfortable at right back; however; Patrice Evra was caught a few times in his slow recovery on defense.

Manchester United’s first real chance of the second half came in the 59th minute when Rooney and Nani connected with one another, but the Portuguese international dragged his left-footed attempt wide.

Only a minute later, after a resulting corner kick, Leverkusen saw an effort clank off the near post, and with de Gea positioned well – it appeared he had the angle covered quite readily.

Evans all but sealed the deal for the reds in the 66th minute off a Giggs corner. Evra found space in the box who saw his effort saved by Leno, Rooney’s subsequent shot was also saved before Evans quickly pounced and put United ahead 3-0.

Despite the comfortable three goal lead, Manchester United continued to look vulnerable from the set pieces. Ferdinand, Evans and Smalling were beaten with absolute ease on numerous occasions as Leverkusen placed service into the box – and luckily for the away side, none would come back to haunt them at the BayArena. Yet overall, United defended quite well.

United would add a fourth in the 77th minute from sublime play from Kagawa, Valencia and Rooney. Kagawa played into Rooney at the edge of the penalty area, who then lofted a pass over the goalkeeper, allowing Smalling to tap-in from two yards out.

Giggs capped off the evening with a sublime pass in the 88th minute with a lofted through ball to Nani, who took a touch past Leno with his chest before a lofted outside of the boot finish to the corner of the Leverkusen net, to put United further ahead, 5-0.

As the final whistle sounded and the cheers of the traveling reds erupted, United were through – to the Champions League knockout round.