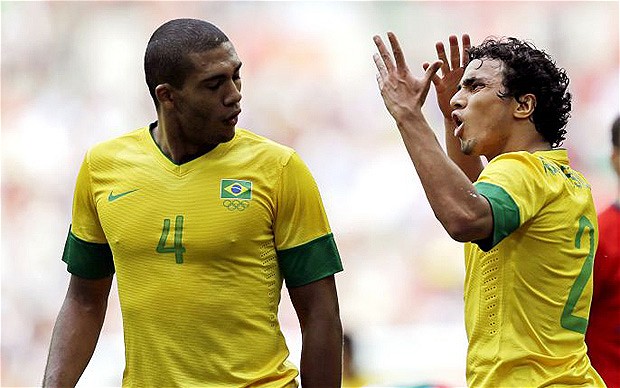 Rafael is one of the contenders for Brazil’s two right-back spots in the World Cup, but he faces many difficulties given his past history at the national team and the reputation and success of his main rivals.

The Manchester United right-back got his first Brazil cap in May 2012, in a game against Denmark, and started for the first time a month later against Argentina, both games were part of the Seleção preparation for the Olympic Games.

Rafael was given the chance to start the game against Argentina because the then Brazil manager Mano Menezes believed he defends better than FC Porto’s Danilo.

The Manchester United right-back had a good performance in the Olympics, as Brazil beat their opponents without much trouble, he scored a goal against Egypt in the group stage, and contributed to Brazil’s wins in the remaining games, helping Brazil advance to the final against Mexico.

Rafael made a mistake early in that game though, allowing Mexico to take the lead and eventually win the game, but despite the fact Brazil had time to reverse the score, the Manchester United right-back was scapegoated for Brazil’s defeat.

The Brazilian FA eventually released a note saying that Rafael should not be blamed for the outcome of the game, but the text was written in a way that made Rafael look guilty. Mano Menezes decided not to call him up for the remaining of his time as Brazil’s manager, and he was eventually sacked in November 2012.

Luiz Felipe Scolari was appointed as the new manager, and unlike Mano Menezes, he was told to focus on experienced players as Brazil’s young national team under Mano Menezes had struggled against top teams.

The new manager selected Daniel Alves as the right-back for his first game in his second spell as Brazil’s boss, leaving Rafael out of the squad. The match was played at Wembley Stadium against England and Brazil were beaten 2-1.

Filipe Mineiro;s Marcos Rocha and Fluminense’s Jean had chances to fight for a place in Brazil’s right-back position but did not impress.

Maicon eventually became Filipe’s replacement, he was called up thanks to his good performance at Roma, while his experience was also deemed an important factor. Rafael got injured at the time, which also prevented him from having a chance in the national team.

Scolari was pleased with Maicon’s performances and the experienced Roma player has remained as Brazil’s reserve right-back, while Daniel Alvez is still deemed the preferred choice. Both had chances to start some of Brazil’s last games in 2013, and Maicon made an important assist as Brazil beat Chile in Toronto in November.

Rafael thus is in a very difficult situation as he needs to displace either Daniel Alves or Maison, while hoping Filipe is not brought back into the squad. The situation is further complicated by the fact Brazil’s only game before the squad for the World Cup is called up will be played in March (against South Africa), giving Scolari little room to experiment.

An injury crisis would be Rafael’s best hope of returning to the squad at this point but his chances to establish himself at the national team tend to considerably improve after the World Cup as Daniel Alves and Maicon will keep declining and are expected to eventually get dropped.

FC Porto’s Danilo will then be likely to be his main rival, as happened in the Olympic Games last year. Brazil are likely to have a new manager, with Corinthans’ manager Tite being considered as the most probable candidate.