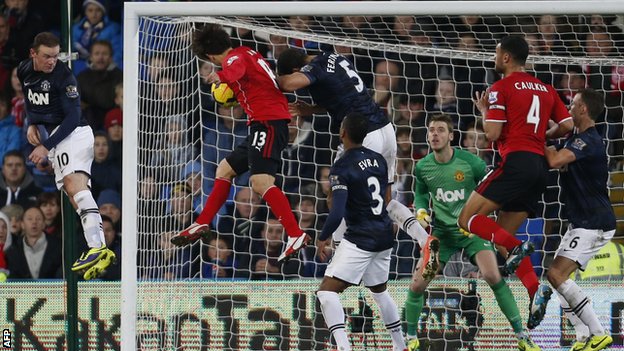 Another week, another mediocre Manchester United performance. After a desperately poor start to the season, the margin for error has been getting smaller and smaller and with each dropped point the group of eternal optimists claiming that the team are still in the title race has been slowly dwindling. Sunday’s single point from the jaws of victory was another significant blow to any faint hopes of remaining competitive at the very top. A win would have been scarcely deserved and was ultimately thrown away by a lack of concentration and the much-maligned tendency to sit back and defend a one goal lead. Two weeks after the euphoria of the battling victory over Arsenal, the gains of that hard work were thrown away in a manner that will have infuriated David Moyes. United huffed and puffed and blew their own house down.

Of course, this was always going to be a season of “transition”. I’ve looked the word up in the dictionary and it reads as thus: “transition: the period at a football club immediately after the retirement of the greatest manager who ever lived when said manager, having performed weekly miracles for the masses who flocked to his church, leaves his untested successor a squad of ageing stars, young’uns with varying potential and a sea of meh. This transition can be further compounded by executive ineptitude in the transfer market immediately preceding the first tranche of competitive matches.” So now you know. Fits like a glove.

For David Moyes there was mitigation for Sunday’s draw. Dire and undeserving or not, United were winning until one or two players allowed their minds to drift to their evening playing Call of Duty while eating Nandos takeout and surrounded by a bevy of naked glamour models. Or something. We still created chances too. And a slew of injuries to key players had left him without the spine of the team. But herein lies the problem. United have, at most, five top class players left: De Gea, Vidic, Carrick, Rooney, Van Persie. Three are in their thirties, one wants to play for someone else and the other is just killing some time before Barcelona want him. Lose one of those players to injury or suspension and their replacement is a significant step down. Lose three of them and things can get quite messy. As one punter said on twitter post match, “United have a squad of ‘squad’ players”. And he’s right. Every club has them. Seasoned pros or up and coming young bucks who can come in to the side when one of the star turns is missing and do a perfectly adequate job until said star returns. A top club will usually make use of only two or three of these a game. At United they comprise 80% of the squad.

For the purposes of demonstrating the above point let’s compare the status quo with the most exceptional United squad of recent years, the 2007/8 title and Champions League winning group. By my reckoning only four of our best eleven these days would get close to that side: Rafael, Carrick, Rooney and RVP. And of the remainder of today’s squad quite a few, on long term form, simply wouldn’t figure regularly in the first team picture. Yes, I’m talking about you Ashley, Tom, Alexander, Antonio, Nani, and (gulp) Ryan. If you step on to the pitch with a very capable Cardiff City team, at their joint, with only two world-class players in your side and an assortment of moderately good footballers, a point is probably a good result. I shouldn’t really pick on him but Tom Cleverley symbolises the decline of the last five years. He has no exceptional talent, is tactically poor and lacks footballing courage, his entire game amounting to running around at full pelt ineffectively and passing the ball five yards, usually sideways. He doesn’t do anything. He could have been more but isn’t and probably never will be now. And yet he is regularly in the mix for a first team spot, with or without Michael Carrick. One-time United player of the year Antonio Valencia has regressed so significantly that his sole contribution to most games is to receive the ball, stop and pass it to Chris Smalling/Rafael. Fifty times.

One journalist with close links to United has said that David Moyes feels that he has an enormous job on his hands, much to the surprise of some of the remaining Fergie loyalists at the club. This is encouraging. He does. Before he can move us on he’s got to find someone else to pay Ashley Young’s ludicrous wages. And Anderson’s. And find the new Rio, Vidic, Evra, Carrick and possibly Rooney. And hope that your club Vice President has worked out how to sign footballers. Good luck with that David. For the remainder of this transition it’s his job to keep us in the top four and make a decent stab at the cup competitions. How swiftly expectations have fallen. Back in Manchester this weekend, City were doing unspeakable things to Spurs and Chelsea were making annoyingly easy work of stuffing West Ham in East Laaaaannndon. For all of their flakiness, such performances show that when the top class players in their sides click both can inhabit another plane of existence to United. They have gears to move up. We don’t.

Next up in the league we’ve got Spurs, laughing at whom continues to keep me sane. They’ve been worse at the back than United and, with a plethora of young attacking talent, quite comically useless up front. For fans of one of the clubs, next week is going to be a truly chastening experience. Funny really, put their midfield in place of ours and we’d be laughing. Be damned, cruel imagination.