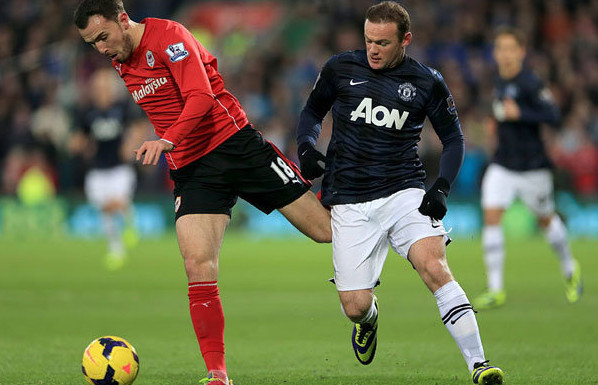 Wayne Rooney is set to escape retrospective action for the kick he aimed at Cardiff City’s Jordan Mutch.

Rooney was given a yellow card following the incident by referee Neil Swarbrick, but new FA rules allow incidents to be reviewed by a panel even if the official has already acted.

However, according to Ralph Ellis of the Daily Star, the FA say Swarbrick had a clear view of Rooney’s off-the-ball kick on Mutch.

Through social media, the England striker hit out at Martin Tyler after the game: “I agree mine was bad tackle and ref dealt with it” before criticising Sky commentator Martin Tyler because he “didn’t shut up about it all game.”

He also hit back at pundit Graeme Souness, who accused Rooney of losing his head, describing him as ‘Sourness’. Red News back in the early 90’s had a similar nickname for the former Liverpool manager.