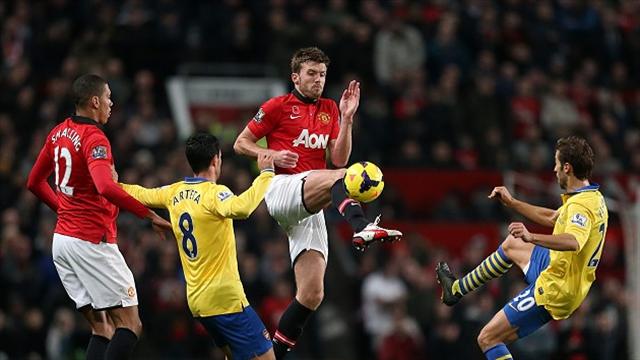 No, I’m not talking about Iain Duncan Smith. Frankly the loss of the minister for Work and Pensions, hopefully via a freak Bedroom Tax related accident, should be celebrated by all and sundry in a manner akin to the Wicked Witch of The East being killed with a house by Judy Garland.

I of course am talking about the passing metronome hailing from Tyne and Wear, the ‘Wizard of Wallsend,’ Michael Carrick. Carrick doesn’t seek fame, fortune or to become rent-a-quote to please the press, Carrick merely concerns himself with being thoroughly brilliant on a regular basis, to elevating his team to a higher level.

Like many of you out there with a good eye for a player and an ounce of common sense (although I may not even possess that) I was delighted to hear that Michael Carrick was signing a twelve-month contract extension. It is difficult to put a barometer on how valuable Carrick is to the team he only has 14 goals in 225 league appearances, nor is he constantly crossing of his tally chart with assists.

The proof however is in what has been around him in midfield for the previous 3 years. Bar the ageing legs of Giggs and Scholes – one of whom has retired twice in that time – Carrick has been surrounded by also-rans, never-weres and could-have-been kings. In that time United have won two league titles, a league cup and made the Champions League final in 2011. The ever present throughout these years has been Carrick, Rooney has flittered in and out of form, fitness and desire, Ferdinand and Vidic have been beset with injuries and Van Persie only arrived last summer. Carrick has been the only truly consistent man in the traditional team spine.

His passing is superb, his vision is an art form and his demeanour is cooler than a Cold War Soviet hitman murdering a snowman with a bag of ice cubes in a Moscow winter. Carrick is a truly world class player, someone who instantly ups his team’s possession share simply by being there…and United are now facing a month without him! There is nobody of equal quality to step up to his place, nobody with his big match experience to instantly impose themselves as the main man in the pressure cooker of a United midfield at a time when the team simply have to keep winning.

As I stated in my last column Jones is busy forging himself a new footballing position as an advanced sweeper or as I have now decreed it ‘False No.4,’ Fellaini could yet come good but has never shown Carrick’s technical ability, Cleverley would have made it already if he was going to and the less said about Anderson’s attitude and his attempts to pay homage Luther Vandross via serious weight issues. There is always Darren Fletcher of course, but after his horrendous illness he has only made 20 appearances in all competitions in two years, to heap so much pressure on the man is unhelpful and unfair.

Make no mistake; losing Carrick for any prolonged period of time is a hammer blow to United.

Carrick will miss potentially tricky fixtures against Tottenham, Everton and this season’s big match specialists, Newcastle and ‘The Wizard of Wallsend’ will also miss a very big Champions League game away to Bayer Leverkusen with Leverkusen needing to win and a game United will not want to lose. How United handle the next month without their most understated talisman could well make or break the season.

Somehow I’ll find a way to blame England and the FA for this step into the terrifying Carrick-less unknown United are now having to take. Carrick was never injured when England thought Carrick was rubbish, so rubbish he apparently was less worthy of a spot in the squad than Scott Parker and when it did not seem sheer lunacy not to have him in an England starting XI.

I used to think Carrick was rubbish too once upon a time, a time I look upon with great shame as though I had committed some sort of heinous crime. Maybe reactionary, belligerent, fools like I, should go back to pretending that Carrick is an overrated master of the sideways pass again. Hopefully if enough of us do it we can fool Roy Hodgson into thinking he isn’t worth picking and Carrick can go back to marshalling United’s midfield while shooting looks of contempt at his underwhelming contemporaries.

If this can’t be managed United need to master the science of human cloning very quickly before we start envying the midfield of Crystal Palace.