Only once in my time following United have I experienced relegation. The final blow is a killer but the season-long build up is worse. It’s death by a thousand cuts. By August 1974 those wounds were healing, Manchester United’s inherent defiance and swagger was returning as Tommy Docherty’s young and talented team shaped up to take the English Second Division by storm. Bolstered by the purchase of striker Stuart Pearson from Hull, Doc’s brave-hearts had an undefeated pre-season then comfortably won the first three games of the new campaign. For the first time in two and a half years Manchester United were regularly winning football matches again.

The team’s fall from grace had not dented the dedication on the terraces. Quite the opposite. United have inspired a fanatical following for over a century but in the mid ‘70s it reached its zenith. Loyal supporters rallied round a struggling team in the tens of thousands. Weekly taunts from City, Leeds and Liverpool fans only made us more determined to stand by the team we loved. Doc’s Red Army grew and so did its reputation. Football hooliganism in the UK came of age in 1974 often with United at the forefront. Manchester derbies in March and April had culminated in riots and nine foot high fences being erected at Old Trafford. Rangers came to wage war in a friendly match and United’s trip to Ostend resulted in dozens of fans being deported. United away days in that Second division season consisted of 6-10,000 Reds following their team. For some games it was nearer 15,000. Our supporters would descend on the rival town or city and take it over. Trains, coaches, cars from all over Britain would arrive throughout matchday. Rival fans were overawed. There would be exceptions, some rival supporters decided to stand in the way of this Red tide. Cardiff City on a bright, sunny August day in 1974 were the first. 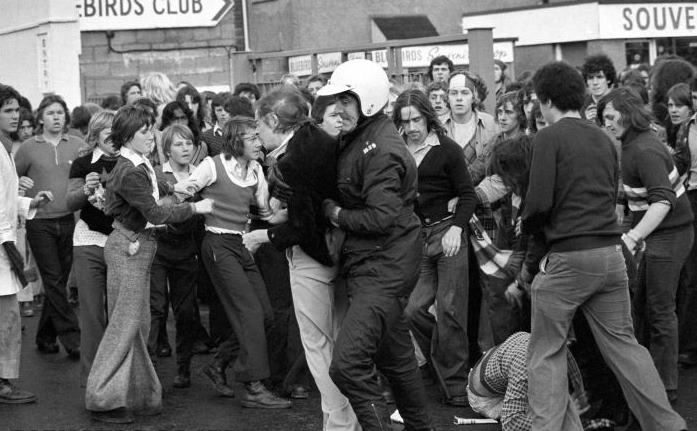 I’ve still got my £1.50 ticket from the match, I can’t remember terrace tickets being sold for league games in those days only reserved seats. It was first come first served in the standing areas, perhaps Cardiff issued the tickets as you went through the turnstiles. I travelled down with Geoff Milloy and Dave Kirk from Salford on the Football Special. It was officially called the Supporters Travel Club and run by Dave Smith. The return journey was £2.50. Smithy had persuaded the United and British Rail to let his people organise their own fans’ travel following years of persistent trouble on the trains. For a while it worked and the journey to Cardiff was the usual fayre of sleeping-off hangovers, card games, shove ‘alfpenny football and avoiding the ticket inspectors if you hadn’t paid. We didn’t know much about Cardiff’s team or their supporters in those days. We knew it was a tough city but they’d been out of the top flight since 1962 and survived on attendances around 15,000.  No match for the Red Army and it seemed as 600 pairs of Doc Martens hit the platform at Cardiff station. The walk to the ground was pretty unremarkable too, United fans announcing their arrival with the customary songs, accompanied by a police escort and a few canine friends to help keep order. Nearer Ninian Park a few skirmishes broke out and Reds we met up with told horrific tales of being chased through housing estates by baying mobs as soon as they got out of their cars or vans. More stories went round that the Cockney Reds coming in from London by train had suffered similar attacks. We went straight in the ground, United had one side along the pitch, right next to it was their ‘End’ The Grange.

Only a thin wire fence separated the two parts of the ground. The police tried to establish a ‘no man’s land’ between the two sets of supporters. That had varying success throughout the afternoon. In the run up to kick-off the atmosphere was one of war, supporters fought hard with the police to get at their rivals. A few Reds had gone in the Cardiff end, not an unusual practice at United games in the ‘60s and early ‘70s but this time it was badly judged. The Cardiff lads were up for it and after a brief outbreak of fighting the visitors were fortunate to find a way through the fence and the police to the safety of our terraces. In those days the argy bargy on the terraces used to calm down once the match started only to erupt again when a goal was scored or a controversial incident occurred. Not this afternoon. It was one of those strange games where most people in the ground spent half the time watching the warring factions on the terraces. No reflection on the game itself, simply the intensity of the action in that small corner of Ninian Park. Few Reds who went remember details of the play, not because of debilitating old age but because of the distraction around them. There are few archive pictures of the action on the pitch but several of the fans and the police. The attendance was 22,344, swelled by up to 8,000 Reds. Cardiff’s small lunatic fringe had mustered their troops from the suburbs, the hills and the valleys to try and give Doc’s Red Army a bloody nose. Our notorious reputation put the fear of God into many rival gangs but Cardiff weren’t buying that. This was Wales v England, glamour hooligans v frustrated plain Jane thugs. Incessant insults, crude gestures, pieces of bricks, rock and wooden staves were exchanged across no man’s land, no holds were barred. Each side trying to outdo the other. Chants of ‘Munich 58’ we rare from opposing fans and still had a shock factor. Half way through the first half, Cardiff sang it. United supporters came back with chants of ‘Aberfan’, a reference to a disaster in October 1966 where coal slurry engulfed a school killing 116 children and 28 adults. Terrace culture reached a new low that afternoon in Cardiff. The chant turned the already spiteful atmosphere toxic. 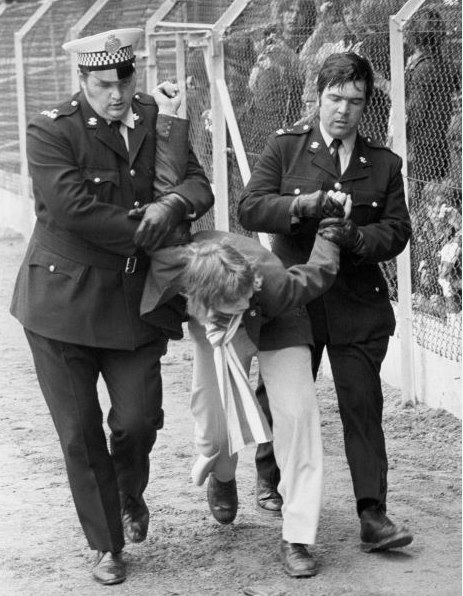 United lined-up with the bulk of the team that went to the top of the league before August was out and stayed there until May:

The hallmark of this fine Docherty team was its strength going forward and his strikers had had two clear goalscoring attempts before Pearson was floored in the 4th minute and Gerry Daly stepped up to convert the penalty. Cardiff’s defence was being run ragged and the game would have been over but for a 20th minute thigh strain picked up by Stuart Pearson. He went off to rapturous applause from travelling Reds, substitute Tony Young took a midfield role whilst Brian Greenhoff moved up front to partner Super Sam. The change disrupted United’s rhythm and lifted the home team’s spirit. It took the Reds until just before half time to re-establish superiority which continued throughout the second half. McIlroy led the line well creating chances for himself and Daly. United’s attacking strength went right through this team, Alex Forsyth and Stewart Houston were always a threat in the opposition’s half. Only a brilliant finger-tip save prevented a powering Houston header doubling our lead. To be fair, Cardiff were a poor side made-up of several players coming to the end of decent careers. They would be bottom of the league by tea-time and relegated to the third tier in the spring.  United’s defence soaked up Cardiff’s late pressure with Martin Buchan and Jim Holton providing the perfect centre-back foil of silk and steel. The 1-0 win kept United top with a 100% record, one point ahead of Fulham and Norwich. The chants of ‘United are back’ were sung with increasing conviction as they would be throughout that winter.

Life was good if you were a Red but first we had to get back to the train station. The events of the afternoon meant every Red was on their guard now. Pre-match arrogance had given way to self-preservation. The battle scenes immediately outside the ground, as thousands of fans poured off the terraces full of bile that had built up through the day, were the worst I’ve seen. It was absolute mayhem, a human cocktail of hate with police woefully trying to keep order. It was every man for himself, then suddenly the fighting stopped, a gap appeared in the middle of the pack. I saw a lad laying on the floor, he had been stabbed. Three or four policemen ran in to help. In that second I decided it was best to get out of there and I headed for the station. Behind me the commotion had halted for a few moments, within seconds it had kicked-off again. I made the train and the three hour journey home was filled with tales of the afternoon’s events off the field. That night’s Football Pink carried reports of running battle through Cardiff city centre. The front and back pages of the Sunday papers showed graphic pictures of the carnage. Cardiff 1974 would live long in the memory for its violence rather than United’s great early form in the battle to return to the First Division. 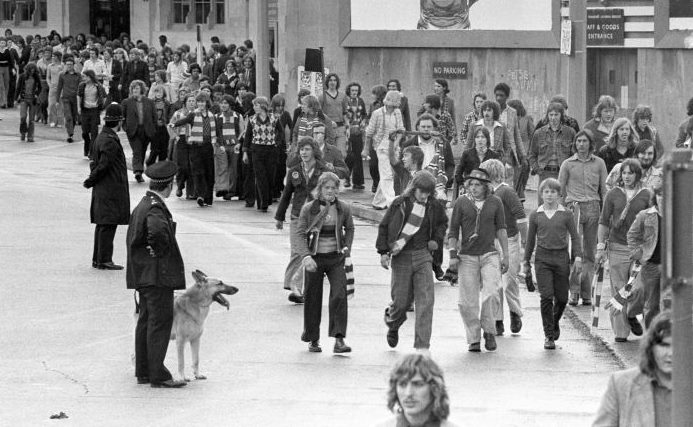