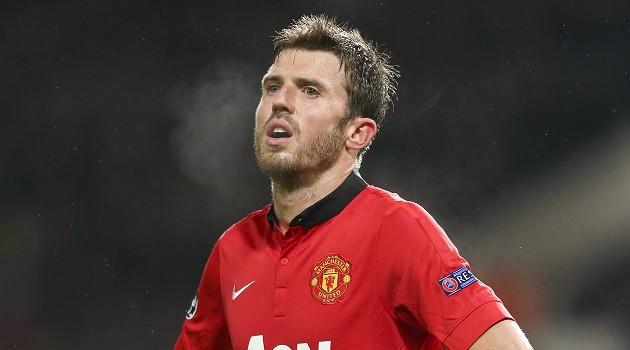 There are widespread reports that Michael Carrick has already returned to light training, just days after being treated for an Achilles injury, and pictured wearing a protective boot.

The initial prognosis was a six week absence for the influential Geordie midfielder. This time-frame has already been reduced, giving hope to fans and David Moyes that he can return to the pitch quicker than anticipated.

If true, Carrick could feasibly return just before the New Year, a timely boost to Moyes ahead of what fans are hoping for a productive January transfer window, ironically his return could coincide with efforts to strengthen the central midfield.

This injury, coupled with the news that Phil Jones will miss the next two games, has left United with threadbare options in midfield ahead of trips to Cardiff, Leverkusen and Tottenham.

Marouane Fellaini, who needs wrist surgery is suspended for the Leverkusen game, but he will be expected to step up domestically in light of Carrick’s absence. The other natural options in central midfield only consist of Cleverley, Anderson and Giggs. Hardly ideal is it?  It’s unfortunate that Darren Fletcher’s welcome return to fitness has come too soon to surely be thrown into the fold once again.

This could mean Wayne Rooney dropping deeper to plug the gap left by Carrick, especially as throwing say Januzaj or Kagawa into the middle would not offer the best defensive protection.

This predicament places further importance on a speedy recovery for Carrick.

Let’s hope the warm weather in Dubai has contributed to this promising news and he can take his place as one of the first names on the team-sheet once more very soon.