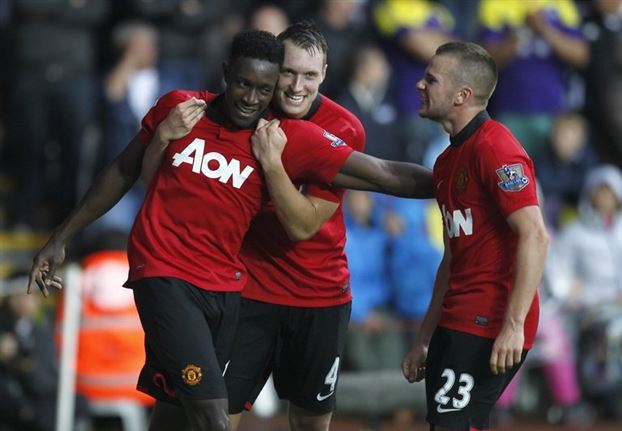 Last week a piece of news broke that froze United fans’ hearts. Michael Carrick is injured and likely to miss at least six weeks of football, possibly more. If there’s one player that the team cannot afford to lose it’s him. After Robin van Persie he was probably our most important player last season and the glue that holds together our decidedly average midfield, a position which was again criminally under addressed in the summer transfer window. Carrick makes United tick, links and builds our play and closes down space when the opposition have the ball. He brings a calmness to the side and combines a fine range of passing with vision and an excellent footballing brain. None of his potential replacements have close to that level and combination of qualities.

What was interesting about the news was the response on social media and the fan’ vision of how the side will be structured without him. By far the most populous choice was for Phil Jones to step up in to a midfield holding role, which he has occupied with considerable class on a few occasions this season, notably the first half of the win over Arsenal. After being forced back in to the back four by Nemanja Vidic’s concussion the midfield battle became more chaotic and turned in the visitor’s favour. The only issue with playing Jones in Carrick’s spot is that he lacks the creativity and composure to dictate the tempo of a game. But what he does add is energy, strength, bite and is unlikely to be bypassed by pace as easily. For me he’s the best option as a stop gap.

The other name preferred was that of Marouane Fellaini, a player I rate very highly indeed, but one who hasn’t yet found his feet or his ideal role at United yet. I get the impression that David Moyes doesn’t quite know what to do with him yet, which is a worry given that he cost £27.5m. Fellaini himself prefers to play a holding midfield role, as he does for Belgium, and he certainly has many of the attributes required to do that. He offers more physicality than Carrick and is a decent passer of the ball, but recent games have suggested that he is struggling for fitness and to tactically read a game from a deeper midfield position. He’s also prone to give away free kicks in areas where Carrick uses anticipation and interceptions to break up opposition attacks rather than brute force. His struggles may in part be due to the injured wrist that requires an operation that is now likely to be delayed until December or the New Year. Moyes has clearly recognised that he is struggling and has favoured Jones in recent weeks, but maybe now is the time to throw him in to sink or swim.

And so we come to the reason for the above meanderings. I follow maybe 7,800 Reds on Twitter and few put forward Tom Cleverley as the man to plug the midfield gap in Carrick’s absence. In fact Anderson got more mentions, although most were purely for comedy value. Either way, back to Tom. He has been a curiosity since emerging in to the first team picture in Fergie’s penultimate season following loans at Watford and Wigan and, prior to that, goalscoring preseasons for United. During his time at the Hornets he was a revelation, scoring 11 goals in 33 league games and was voted the club’s player of the season. It looked like United finally had another goalscoring midfielder on their hands. The Wigan loan was less sensational but he helped the club to avoid relegation and scored 4 times in 25 appearances, mostly from an unfamiliar position on the wing. At the start of the 2011/12 season he made a sensational return to United, Sir Alex Ferguson highlighting him as the natural successor to Paul Scholes. United fans wanted Wesley Sneijder but Cleverley’s early season form, including his beautiful assist for Nani’s first goal in the Community Shield against Manchester City was extremely promising. That was perhaps his high point.

Since then Cleverley has drifted. At times he has shown signs of promise as a partner for Michael Carrick, providing the legs that are Carrick’s biggest weakness, but without ever suggesting that he is the long term answer to United’s midfield problems. He is a jack of all trades but master of none. He has a good first touch and his passing is neat and tidy, but he lacks the vision and range of a top class midfielder. He bites at opposition players, harries and pressures but lacks tactical discipline and often expends too much energy running around and leaves gaps behind him in the midfield. Most pertinently he has simply not become the goalscoring midfielder that his early appearances at both United and Watford hinted at. In 59 appearances for Manchester United and 6 for England he has 4 goals. With his passing, positioning and finishing he seems to lack the confidence and/or composure to impact games in the final third of the pitch. For a period Cleverley became one of the first names on Roy Hodgson’s England teamsheet, mostly playing as a number ten behind a striker. His national team apprearances have demonstrated the same qualities and limitations that he has shown at United, to the point that he seems to have fallen out of favour and with the emergence of players like Ross Barkley, Adam Lallana, Jay Rodriguez and a number of others in the Under 21 squad Cleverley now seems to be fighting not for a first team spot at the World Cup but to simply get on the plane to Brazil.

And it seems that those limitations have now solidified themselves in the minds of United fans. Where they see genuine promise and performances in Phil Jones and hope that Marouane Fellaini can reprise his Everton form, Cleverley has now been largely accepted as no more than a decent squad option. Every club needs them but few see him as the man to carry us through our Carrickless period of fear. Of course, none of this is his fault. He was, perhaps, a victim of his own early career form, before settling down at his natural level. Football is full of players who burst in to the nation’s consciousness, running on adrenaline and youthful exuberance and lack of fear before settling down to their genuine level.

As far as United are concerned we shouldn’t find ourselves in this position at all. The failure to sign a top class creative midfielder, and the manner in which we set about trying to sign one, was farcical. Ed Woodward talks a good game as to why it didn’t happen but the summer was blighted by bizarre public chases for unobtainable players, promises of huge coffers of money, low ball offers and a transfer deadline day that ranks as the most ludicrous in the club’s history. In January and next summer there can be no excuses, no saying there wasn’t enough time or that David Moyes is still assessing his squad. Woodward is a prodigiously intelligent executive who is engaging with fans in ways that David Gill was never willing to and is a master at maximising income streams. With the refinancing of the club’s debt the last set of annual accounts showed a spend of over £70m relating to those transactions and one off costs. This year, with interest reduced significantly, the club will make a fortune. An adequate replacement for Carrick is a must. For now we are hoping that two ball winning midfielders can temporarily plug the gap. Few expect Cleverley to be that man, although the paucity of options mean he is likely to get games. There is frustration at promise unfulfilled. Maybe he’ll prove us all wrong, throw caution to the wind and become a match winner, but I doubt it. Cleverley’s game is safe. Picking him is safe. But safe isn’t good enough for life without Carrick.