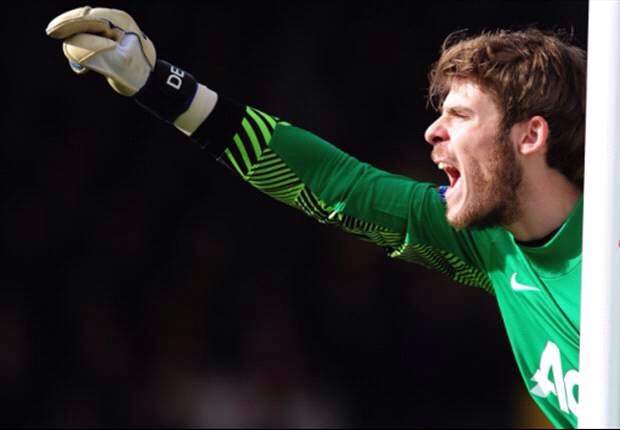 “He’s called David de Gea Quintana. But don’t bother learning all those names. There will be another chap along soon. There has to be”. This was the ill-judged view of a journalist who shall remain nameless to spare his blushes. Nah, screw it, this was written by Mick Dennis on the 15th August 2011, just TWO games into the Spaniard’s attempt to fill the enormous void left by Edwin Van Der Sar.

This rivals the legendary ‘You don’t win anything with kids’ Alan Hansen slur from 1995. Many opposition fans, who were laughing at De Gea’s early torment, must be tucked up close to Dennis under that rock, his transformation from scrawny, light keeper to assertive shot-stopper has been stunning.

From letting a Shane Long shot squirm underneath his body in 2011 to pulling off ‘one of the best saves’, in the eyes of a true United great Peter Schmeichel, from Emmanuele Giaccherini in 2013, one thing that has not changed has been the unequivocal, unwavering support from the terraces for the Spaniard. Something Big Dave acknowledged to Inside United:

It’s fantastic. I play for my team-mates and I play for my manager but I also play for the fans. When you win over a club’s fans, it’s a very proud moment. These are the people who pay money to come to watch you every week. You owe it to them to play well and give your best, so it makes me extremely happy to hear the fans singing my name.

Right from the beginning they’ve been very good. The fans I meet have always been encouraging and those in the stands have always sung my name. I can’t tell you how good that feels.

There were murmurings with Victor Valdes leaving Barcelona shortly, that De Gea would be a potential candidate to take his gloves. However, De Gea has been speaking about his aspirations as a United player on the eve of his 100th appearance:

“One hundred, eh? Wow! I’ll be delighted to reach that figure. It makes me very happy and I want to make it to 200 and then 300 appearances.

“The record is a lot of games. You never know though. At the moment, that figure seems very high but I’ll take it one game at a time.

“I hope to play as many games as I can for Manchester United and, who knows, maybe one day I will reach that number and go even higher.

It is at the back of most peoples’ minds that one day De Gea may return to his homeland. But it is great to see that he is looking to become an iconic figure at Old Trafford. He has come on leaps and bounds from the first-year mistakes, and there was talk recently that he would be rewarded for his outstanding start to the season with a new deal, to end any interest from Barcelona and the like.

De Gea has kept us in games this season, and arguably picked up 4 points for us from losing positions. Stoke could have been out of sight at Old Trafford had it not been for three quality stops, and as mentioned earlier, had that Giaccherini header gone in at the Stadium of Light, we’d have had another mountain to climb.

De Gea truly is a world-class keeper and despite there being great keepers in our league, there is a good case to suggest that Dave is the best on current form.

We’ll need him to be on his game, like last season, at Tottenham in a few days time, we should just appreciate how good he really is, he is destined for greatness.

Penny for your thoughts now Mr.Dennis.