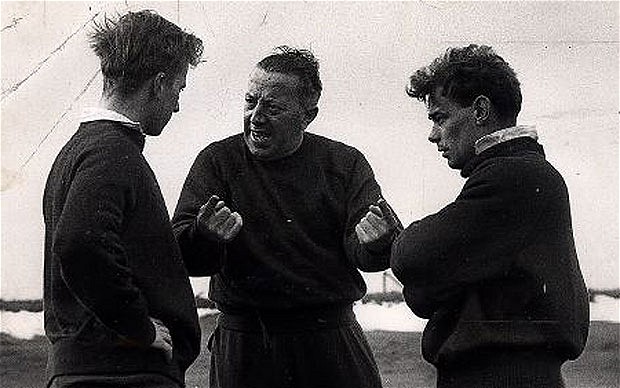 Finding strength in the face of adversity is embedded deep into the core of Manchester United. That ‘never say die’ attitude that is so synonymous with this great football club, epitomised most recently by the greatest manager to have ever lived, Sir Alex Ferguson.  All those last minute victories, the ability to pick ourselves off the canvas in the seemingly impossible situations has shaped our club for years. But Ferguson was merely inspired by the spirit of one man, in the words of the legendary Sir Matt Busby, ‘my first and most important signing’.

Murphy was no stranger to hardship and trying to pick up the pieces. He arrived with Old Trafford in ruins, the stadium severely damaged in the aftermath of the Manchester blitz by Nazi Germany. The club stooped to low depths, playing our supposed ‘home’ games at Maine Road of all places.

Sir Matt Busby first came across Murphy’s infectious passion and driven nature during the Second World War, in which he was giving a speech about football to those ready to fight for Queen and country. Busby was suitably impressed with Murphy’s credentials and subsequently took him on-board, firstly in a coaching capacity and then as his assistant.

Murphy’s area of expertise, assigned to him by Busby, was to unearth precocious young talent,  and nurture these proteges who would eventually become ‘The Busby Babes’.

Disaster struck on the 6th February 1958, a nation wept as the Munich Air Disaster tragically took from us a team that was destined for greatness. ‘The best player to ever play the game’ according to Sir Bobby Charlton, one of the remaining survivors of the crash, lost his life alongside twenty-two others. That man was Duncan Edwards. Busby was fighting for his life and the club was on the brink.

Murphy was not with the team that fateful night, as he was away managing his beloved Wales as they attempted to qualify for the World Cup. He now had the proverbial weight of the world on his shoulders, to keep United afloat. He was thrown in at the deep-end, having to keep abreast of the state of Busby’s stricken youngsters, having to sign emergency players at very short notice, having the arduous task of rearranging fixtures and making sure we survived as a football club. The situation was grim, it is not hyperbole or an exaggeration to suggest that United would not be one of the biggest football clubs today had it not been for this unassuming Welshman.

Murphy was virtually achieving miracles. He managed to somehow get a patched up United side to the FA Cup final that very year, unfortunately coming up short to Bolton Wanderers and Nat Lofthouse, who for one of his two goals bundled goalkeeper Harry Gregg, another Munich hero, into the net. The rules were considerably different back then about contact with the keeper and the goal controversially stood.

With Busby out of hospital and ready to resume managerial duties the next year, the double act were back and lead United to a 2nd place finish in the league just one year after Munich. The perfect tribute to the Busby Babes was the stunning extra-time victory over Benfica in the Champions League final at Wembley, symbolically ten years after the disaster. Murphy and Busby had achieved the unthinkable, it was the stuff of dreams.

The transformation of Manchester United with Murphy overseeing most of that period is truly gripping and stunning. Murphy left Manchester United as a world famous club, we had conquered Europe and left a mark on the hearts of many worldwide in the process. Mainly due to his unsung work.

Many of the younger generation may not necessarily associate Jimmy Murphy on equal footing with Sir Alex or the holy trinity, but Murphy should arguably be held in such esteem, after all he was the guiding light to help the Charlton’s and Best’s achieve greatness and Manchester United immortality. In recognition of his stellar work in developing the brightest young talents into greats, there is a trophy named in his honour given to the best academy player each year. It is a small tribute to Murphy’s work, but that is very much how he would have wanted it, he was in the background to Busby, he would say he was just doing his job and earning a living and happy to help a managerial icon.

Truth be told, Murphy helped Busby realise his vision and ultimate goal. Busby changed the United philosophy, he was one of the first managers to ‘change the guard’, hence why his ‘Babes’ will never be forgotten.

People who are currently saying that David Moyes has the toughest job in football replacing the managerial godfather in Sir Alex, should take into account that Murphy had to reform our great club from scratch in the light of the Munich Air Disaster. We were decimated in 1958, to keep United running and to ultimately rise from the wreckage was truly the impossible made possible.

It has been twenty-four years to the day that Murphy passed away, let us remember one of our first unsung heroes.

May you rest in peace, Jimmy.

One response to “Jimmy Murphy Remembered – The Unsung Hero”