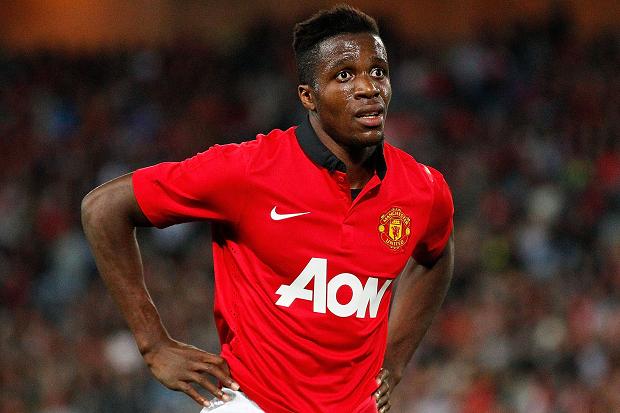 It’s fair to say that things have not been plain sailing for precocious talent Wilfried Zaha since he caught the eye of Sir Alex Ferguson and earned a big money move to United in the process. Rumblings about his social life, gang involvement and an alleged affair with Moyes’ daughter have not done the youngster any favours whatsoever.

The early signs were looking very promising for the ex-Palace winger. On the back of a blinding performance in their playoff final, he carried on that form into wearing a red shirt, starring on pre-season and earning a starting berth on the right-side in Moyes’ first trophy win over Wigan in the Community Shield.

So what has caused this supposed slide happening as quick as a joke about Moyes’ daughter appears on Twitter? Who knows really. Has the move got to his head? Is he not putting in the hard yards a la Macheda, just because he is wearing the tracksuit? Is he simply just not up to our standard yet? There are numerous theories and explanations, but only Zaha and Moyes himself can know the answer to this puzzling conundrum which is not abating presently.

Adnan Janzuaj’s meteoric and stunning burst onto the scene has further pushed Zaha down the pecking order, leading to persisting column inches that Zaha may seek a temporary switch away from Old Trafford so he will no longer be stifled and as a result his progress stunted.

So what needs to happen now?

Seeing as Zaha has only featured in the Capital One victory over Norwich, looking naturally rusty in the process, those who are convinced that Zaha would reap the benefits from a loan switch put up a worthy argument. We are seeing the advantages of youngsters going outside the United bubble and getting on the pitch and doing their thing, Lingard, Powell, Tunnicliffe and Henriquez to name a few are all thriving at their respective clubs at present. There is no reason to think that Zaha would not enjoy a similarly fruitful spell.

However, there are those who are desperate to see Moyes unleash the winger, knowing that he may well have as equal a devastating impact on the first-team as Adnan. With Nani the subject of callous booing from our own faithful, and Young up to his usual ‘tricks’ or being all too predictable in his play, coupled with ludicrous theatrics with both culpable, there should be a glaring opening for Zaha to try and force his way into Moyes’ plans.

Naturally, at this given moment, it’s all too easy to jump on the Nani and Young hate bandwagon, but I cannot help but sympathise with those who are slowly losing patience with the two of them.

Young, whose recurring controversies were somehow condoned in the press today, has been a ‘nearly’ player for United. He looked the dog’s bollocks early on, especially in that 8-2 over Arsenal with those two curlers, but what has there been after that? Alright, two goals against Spurs away but can you honestly say he is worth the £135,000 per week salary, yes you read that correctly, and the reputation that is slowly bringing his and our name into disrepute?

Like Young, Nani flatters to deceive. Brilliant on his day, a curse rather than praise ironically, as we do not see ‘his day’ often enough. Tensions boiled over, wrongly, by some restless fans against Stoke which saw Nani hauled off to a chorus of boos, mainly because fans know what he is capable of and he is not producing it often enough to justify that big fat five year deal.

So maybe it is time to unleash the shackles, like we did with Januzaj, and say to Zaha, ‘go on lad, show us why we bought you.