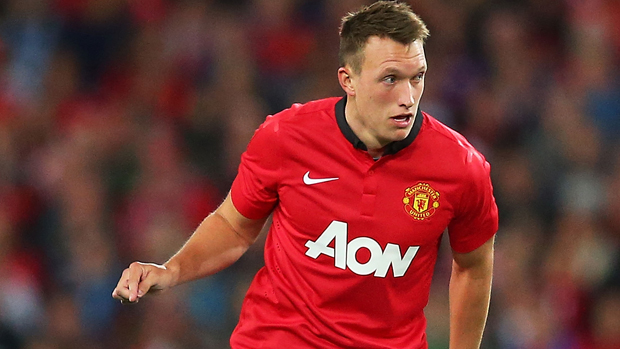 Phil Jones has become something of a philosophical conundrum for Manchester United fans since his arrival and his storming, fearless early performances of his career. Since then he’s been shunted around to different positions and suffered injuries undoubtedly caused by his all action style on a fairly sizable frame that has not even finished developing yet, he is just 21 after all.

The player is one of, so far, flickering promise because of a rather stop-start two years but yesterday he was the star of the show, the standout in an excellent collective display. The simple stats alone do not stand out for him although he made 13 successful defensive interceptions including a stunning sliding interception on the anonymous Santi Carzola. However he showed a tactical maturity in that match that further add credence to his fan club’s (of which I am a fully paid up member) claims that he will one day be captain for club and country.

Jones has the baring, physical stature, playing style and collection of comedy faces of a leader without even saying a word. Jones leads by example, demonstrated magnificently when he bulldozed his way with the ball into the Arsenal box from deep to light up a rather dull game with all the subtlety of the writers of the perversely awful show, The Big Bang Theory. It was a world class display that should have won him plaudits and the empty, pundit – bestowed title of Man of the Match – that rather bizarrely went to Rooney who yes had a good game but essentially picked up the award for the tactical genius of ‘running around abit.’

Indeed on the surface it was those rather basically qualities of ‘running around’ why so many of us enjoyed Jones in the first place, playing with a style that was football’s equivalent to Die Hard 4. To those of us of more discerning eyes though what really caught the eye was the combination of raw power, English heart and excellent (and often overlooked) technical ability. Furthermore in the last few month Jones has begun to develop more tactical intelligence to intersperse into his natural gifts as if he has suddenly start to realise how good he is. Ferguson started utilizing him in the big games, such as his superb display as a roaming destroyer in Madrid last season and now Moyes has started playing him regularly while dispensing with other players who are either past it or never had it.

This new found discipline as well as regular game time to develop should make him an all the more terrifying prospect for opposition players; a giant red, immovable wall in defence and a Viking marauder in attack.

The question however, still remains for many people: Where do you play him? Jones has played as a central defender, a right back and a central midfield player. This has lead to people comparing him to utility men of yore such as John O’Shea and Phil Neville, while both players were excellent servants and dependable footballers this is unfavourable and unfair to Phil Jones. I already rate him better than both of the aforementioned players and he is just 21 and Jones’ natural talent lend him to being far more than a utility man.

Barney Ronay in the Guardian offered us an interesting prospect: Jones shouldn’t be pigeonholed into any of these positions as his talents in the current age of fluid attacking football require something new. This is where Marouane Fellaini could have a problem as I feel this role is as an advanced or reverse sweeper, mopping up in front of the back two while utilising his considerable technical ability to start attacks and maybe get a few goals himself.

Ronay jokingly referred to this new position for Jones as the ‘False No.4’ but why not? Jones’s star turn in that first half and his disciplined show in the second speak of a player who has a combination of unique gifts and should be applied as such by inventing a new position for him. People may scoff at my high regard for him but they would almost certainly would not, had he a more exotic name, came from warmer climes than North Lancashire and didn’t have a Les Dawson talent for well timed funny faces.

Jones is dispensing with tradition and convention and it is time for people to wake up to the fact that both Manchester United and England have a very special footballer on their hands in the Preston Beckenbauer, if Moyes’ tactics against Arsenal are anything to go by, he certainly has.