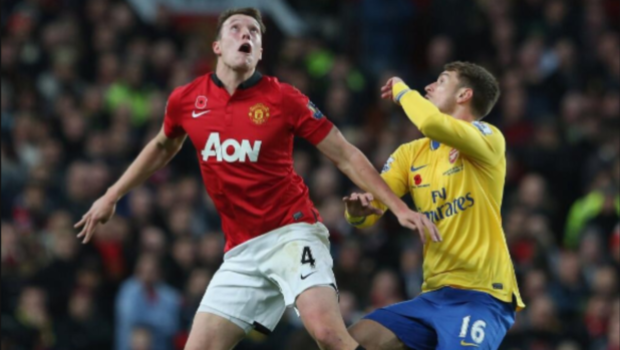 He is often ridiculed by many opposition fans as an internet sensation for his many quizzical and varied facial expressions, but yesterday no-one would have been laughing at the sheer immensity of Phil Jones’ performance in taming the league’s in-form side to a few paltry efforts, making them look unimaginative in the process.

Yesterday’s deployment of Jones in central midfield was not the first time, and won’t be the last for that matter, that we saw him in that position as a purely tactical move. Last season, he was asked to follow every footstep of Gareth Bale, Marouane Fellaini and Cristiano Ronaldo, and was mightily effective in nullifying the then Tottenham, Everton and Real Madrid players’ obvious threat. The biggest tribute to Jones’ defensive duty masterclass yesterday would be to ask if Ozil or Ramsey, two of the league’s shining lights this season, even hurt us once yesterday? Not that I can remember.

Everyone knows how to rough up Arsenal and stop their fluid passing game, simply get amongst them and disrupt their rhythm by showing tenacity, aggression and purpose. No-one epitomised this better than Jones yesterday. Returning to yester year, most reds will fondly remember the game where Jose Antonio Reyes was taken to the cleaners, being the recipient of some ferocious tackling from Keane, Scholes, Neville et al. Although Jones, in my eyes accidentally, thundered into Wojciech Szczesny and subsequently got booked, on the whole he did not have to resort to purely kicking tactics, but he harried Arsenal’s creative threats and barely gave them a kick in the areas which mattered most. Jones was equally as effective in the home derby last season, it is becoming apparent that Jones relishes the big occasion as if it is his bread and butter to churn out quality performances against our title rivals.

Jones copped some flak off the written media pre-game, at the core of the criticism was that he had not yet found his niche position and was struggling to make his name in his preferred position- central defence. This was unfair on the lad, the criticism was based on one wretched afternoon for Jones against Stoke, where he barely won a single aerial challenge with Peter Crouch and gave away a needless free-kick which they scored some 30 seconds after our equaliser. Firstly, you could probably count on one hand the amount of defenders who could actually win the majority of headers against Peter AKA Circus Freak Crouch. Secondly, he seamlessly fitted into the back four in the second-half yesterday and made the loss of our captain not as drastic as it could have been. There was lots of talk that if Jones does not get his act together he may fall into the unfortunate curse that befell John O’Shea and current coach Phil Neville, i.e. the utility man, where adaptability was harshly detrimental, why being more than capable in multiple positions on the field could be a hindrance. But yesterday, Jones put in a display that O’Shea had put in hours before, as Sunderland beat city (again haha) and that Neville would have been proud of as he watched from the touchline.

There is no doubt that Phil Jones sees himself as a future centre-back for club and country. We have seen evidence already this season that Moyes is of similar thinking, after the city debacle there has been a piecemeal changing of the guard, with Jones at the heart od our defence.

So what if he hasn’t mastered a position yet, he is only 21. He still has years ahead of him before it even becomes the slightest necessity to find his true position, as far as I’m concerned, he can carry on being this so-called ‘enforcer’ if it means keeping out some of the very best attacking players.

The comparisons to Hierro, Baresi, Keane, Robson and even the great Duncan Edwards will surely not fall on deaf ears. Phil Jones could be anything he wants to be. He just needs a good run in whichever position Moyes sees fit. It’s hard to believe he is still only 21, now in his third year at United, just imagine what he could be like at 27 when defenders are supposedly meant to hit their peak form. Frightening isn’t it?

Sir Alex is adamant he will captain club and country, and could be one of the best ever. Whether he’d had one too many glasses of champers after beating Villa to win the 20th title when he said that remains to be seen, there is no doubting his worth to this United team though.

As could be heard around OT last night, ‘Phil Jones sets the tones’.