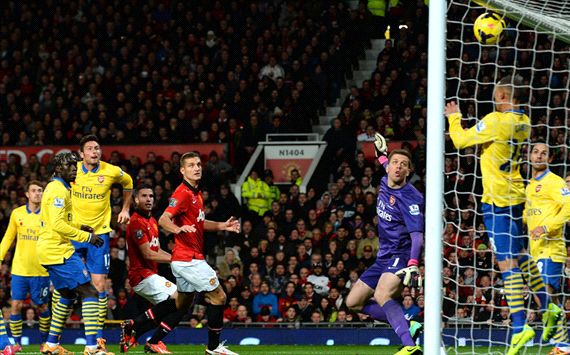 Before the match, there was speculation about whether or not the former Arsenal man, Robin van Persie would feature. But there he was – bright eye, and centre of Manchester United’s attack.

In defense David Moyes still seems to be searching for the proper defensive shell. With Nemanja Vidic and Rio Ferdinand dealing with injuries and entering the latter stages of their career, it appears ideal that Jonny Evans be given a shot. In regards to the start of Chris Smalling in the right back position, it’s only a matter of time until Rafael returns to his rightful spot.

Entering the match, the battle seemed clearly to be won in midfield. Whomever dominated the center of the park would be able to control the tempo of the entire match. For Arsenal, Mathieu Flamini and Aaron Ramsey were given the task of pairing up against a defensive minded Phil Jones and a healthy Michael Carrick.

From the start, United appeared on the front foot. A minute into the match and Old Trafford erupted after the reds won their first corner of the match. In the 43rd fixture between the North Londoners and the reigning Premier League champions, Moyes allowed Shinji Kagawa a run after his midweek performance in the Champions League.

Arsenal seemed quite comfortable to absorb the early pressure from United. Allowing the reds to play higher up the pitch,  Laurent Koscielny and Thomas Vermaelen were quite content keeping Wayne Rooney and van Persie ahead of them. The tidy Arsenal defense fell on the back foot early as Rooney continued to run behind the back line with real conviction like a man possessed. With 10 Premier League goals against Arsenal, the Englishman appeared poise to grab his 11th.

And despite the early pressure, United were unable to grab a go-ahead. Patrice Evra and even Smalling continued to drift forward sending in crosses; however the service was poor – and into the arms of Szczesny.

The more United pressed forward, Santi Cazorla and Ozil were forced to defend. The lessened threat of Arsenal and dominating possession from United – paid off just before the half hour mark.

From the corner, Rooney sent in his curling cross directly into the path of the flying Dutchman – whose glancing header tucked in right inside of the far post 27 minutes into the contest. Wenger, the man who nurtured the goal scoring demon, was now our demon. Van Persie collected another goal, in three straight meetings with his former club.

The ultimate away test for Arsenal – and United would bend but not break. Comfortable clearance from Evans, the reds continued to intercept the passes from the onrushing Arsenal midfielders – and long stages Olivier Giroud appeared missing.

Moyes’ men were quite content with the wide play, thus stretching the Gunners defense. Arsenal were ruffled. As was Ashley Young as he scoured on the bench, but that’s neither here nor there.

In first half added time, Vidic took a knock to the head causing him to be substituted at half time. Jones was subsequently moved to centre back and Tom Cleverley alongside Carrick.

In the second 45, Arsenal continued onwards with their lackluster attack, while United continued to threaten. Carrick per usual was picking out his passed. And 60 minutes it appeared 2-0 to the hosts. Rooney’s deft touch to his left foot left him with a clear view of the Arsenal net; however he dragged his left-footed attempt wide right.

With that Wenger threw on his coat, and threw on Jack Wilshere for Flamini in search of much needed chances on de Gea. It was a full team effort, everyone on the pitch for United defended as a unit and surged forward with real conviction. The edge to edge performance will electrify the United supporters moving forward and the club enters the heat of the Champions League and Premier League fixtures.

Rooney, my man of the match charged 50-meters up the pitch to challenge Vermaelen after he’d just stopped Ozil atop the box in the 69th minute.

Arsenal lacked their “Rooney.” Manchester United allowed very little space on the pitch for the Arsenal players despite the final quarter of an hour seeing additional pressure from the North Londoners.

United went on to capture the three points. But leave it to the critics to indicate United only claimed the three points because of of the virus sifting through the Arsenal ranks.

Moyes’ boys have their own virus – the unbeaten in-all-competitions-in-nine matches virus.