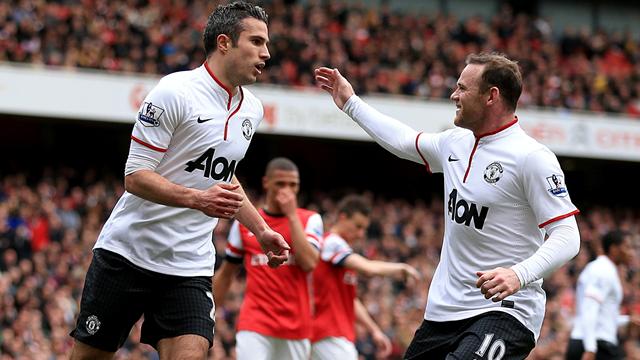 In preparation for this weekend’s clash between Manchester United and Arsenal I spoke with Nicholas McMahon from the Bergkampesque blog. We discussed their fickle fans, what it takes to win the league and he made a match prediction.

Arsenal have started the season brilliantly but have they got enough in their squad to show consistency throughout the year and win the league?

It has been a good start. I think we do have what it takes to win it this season but the season is long and anything can happen. We’ve had to make do without Walcott, Podolski, Santi, Ox, and Arteta for parts of the season but once they filter back a bit more rotation can happen. Like most Arsenal fans I shudder to think what will happen if Giroud goes down for an extended period. There is no excuses this season. We’ve got the big signing, there has been a manager re-shuffle, and our squad looks settled.

Following a defeat to Villa at the beginning of the season, some Arsenal fans had enough of Wenger and felt his days should be numbered. How fickle are your fans?

Very fickle. Arsene shoulders a lot of the blame and that just shows how much he loves the club. I think our supporters were spoilt during Arsene’s early days so now some supporters think we have a divine right to win trophies all the time. I do think the media hype up the anti-Wenger stuff a touch though. The Villa game was more of a message to the board to spend some money. The transfer window was tough and definitely took its toll on the supporter base. I do question the intelligence of the supporters who boo the team/Arsene. Surely they can’t think it’s a good motivational tool…but hey what do I know.

The weakest link in the current Arsenal team?

I think we are pretty well rounded to be honest. Certain areas could be in question if a player went down. For instance Sagna and Giroud. Jenkinson was good last season when needed but has struggled at times this year (I think/hope he makes the grade). Bendtner comes in for Giroud. I like Bendtner, if he pulled his head in and concentrated on his football (which he appears to be doing) he could be a good player. Unfortunately it looks like his ego has cost him a successful career.

Prediction for the top four?

I think City and Chelsea have the $$$ depth to make it. Liverpool and Tottenham will probably drop off. United always seem to get the job done in games. However, I think the Moyes transition may just cost you this season. For what it’s worth I really like Moyes and I definitely think he needs time to settle. Everton may sneak in. Normally they are slow starters and finish strong but with Lukaku I think they may make it.

Most Arsenal fans I speak to are quite vocal towards to the board. What are your thoughts?

A few months ago I would have asked how much time you’ve got…now I’m content. My biggest gripe is Gazidis saying we have loads of money, we can buy whomever, etc etc, but then not really delivering. We got Ozil but jesus we could have done with a few additions here and there over the last few seasons. I wouldn’t have a problem if he came out and said “we have to rely on youth, we are paying off debts, etc” but saying one thing and not delivering frustrates me. What Kroenke is up to is anyone’s guess. So far it appears as though his intentions are good.

The Rooney dive to end our unbeaten run. Sorry but diving really irritates the hell out of me.

If you could take one of our players, who would that be?

Before Ozil I would have said Shinji Kagawa (thought he was a gun at BD). Now I’d go with another underutilised player: Javier Hernández. I think he’d fit in to our setup really well. He reminds me of Eduardo because he’s a menace in the box and always seems to pop up when you need him the most (a bit like Solskjær did). 15 million for Hernández…make it happen Dave!

The optimist in me says 1-2 but the realist says 1-1. OT is probably the toughest fixture so winning there would do wonders for our confidence. We just won in Germany so who knows. Just tell Rooney and Young to keep their feet. I would like to see a good exciting game of football, not a game decided by a dodgy penalty.

I also answered questions for an Arsenal blog, featuring in The Bottom Corner’s opposition view column.

3 responses to “A View From The Enemy: Arsenal fan on Wenger out, fickle fans and Bendtner’s big head”