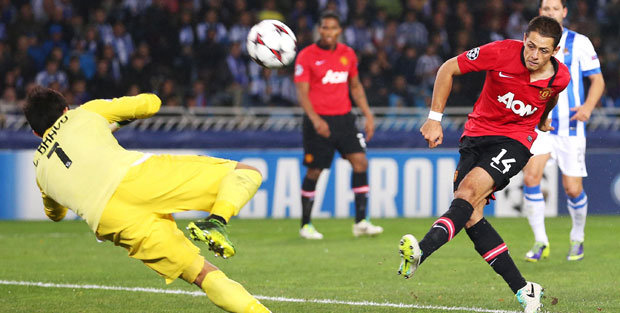 There was much stressing and conjecture about Tuesday’s failure to capitalise away from home again but Europe is simply a bonus and has seen Manchester United’s best football this season.

In hindsight it was a little disappointing to only come away with a point from San Sebastian; on the balance of play and the form of Real Sociedad in a less competitive league, Tuesday should likely be seen as two points dropped. However some of the “analysis” of that match last night was downright laughable. Our performance being called tentative, cautious, people criticising Moyes and most hilariously the master of the asinine comment himself, Ray Wilkins even went as far as to say United would struggle to make the last 16.

The day Ray Wilkins manages to make an incisive analysis of a football match is the day Natalie Portman declares her undying love for me after I’ve won the Ballon d’or while Prince plays a live concert in my honour in the background.

Lofty personal dreams aside these are all misguided assumptions to make. First of all people are talking as if United failing to win away games in Europe is anything new, it is not. United have been poor away from home in Europe for a good few years now, even in our better away performances we have usually failed to win due to being too cautious to press home an obvious advantage.

Secondly last night’s performance, while a little underwhelming, was still enough to win the match. United created the better chances, had more of the ball and even won more tackles, the problem was that United were wasteful in the final third. Valencia’s selection was a reason for that, as he was incredibly profligate with the ball and lacked drive again and it fair to say that “Tony V’s” best days are behind him in a red shirt. On the other hand there are signs that Moyes’ is starting to tactically adjust to his new surroundings, with a stronger team United would have likely taken a comfortable win yesterday and he has now started showing flexibility with his tactical systems. Over the last 3 games United’s left hand side has been much more flexible with Kagawa and Januzaj as Moyes  has begun appreciating those player’s strengths are best utilized as more free roaming attacking midfielders, somewhat mimicking his Everton team with Pienaar as an inside left midfielder and Baines as an overlapping, marauding wingback. One would hope with the acquisition of a quality, younger left back to challenge the declining Evra, that system could be made to work.

The counterpoint in regards to Ray Wilkins’ typically ill-informed analysis, is that there are still two games left to play and one of them is home game against Shakthar Donetsk, a far weak Shakthar team last season and combined with United’s good home performances in Europe so far this should be three points. Leverkusen will be much tougher proposition as even Bayern were unable to snatch a win at the Bay Arena, however with hopefully our strongest team available, 3 points from the final two games should be more than enough to qualify in this group. Wilkins should also realise that to get a point in Donetsk with a seriously depleted squad early on in a new manager’s reign is an excellent result – something his beloved Chelsea failed to do last season.

The key point to my fellow United fans though is this: Do not get too stressed about Europe, we are nowhere near close to being good enough to win the competition and it should be considered an enjoyable bonus. To be brutally honest Manchester United are not amongst the top 8 teams in Europe right now so making the last 16 is a creditable performance. This is not the fault of the manager, the team was not good enough in the previous two seasons either, yes we gave Madrid a fright but we failed to take our opportunities and fell to pieces after a red card, which is not excusable at the top level.

United’s priority is making the Premier League’s top 4 so that Moyes has some much needed financial backing for next few transfer windows, all other tournaments should be just enjoyed without pressure by the fans while the squad needs much needed maintenance which could take another 18 months, at least. Credit where credit is due to the players, they have played with more freedom in Europe and the League Cup than the Premiership and as Chelsea and Liverpool have demonstrated in recent years, when it comes to knockout football, anything is possible with good fortune and momentum.

So let’s be motivators, not reactors, enjoy some old fashioned United cup football and create some special European nights again.

One response to “The Northern Loudmouth: When it comes to Europe, don’t react, motivate!”