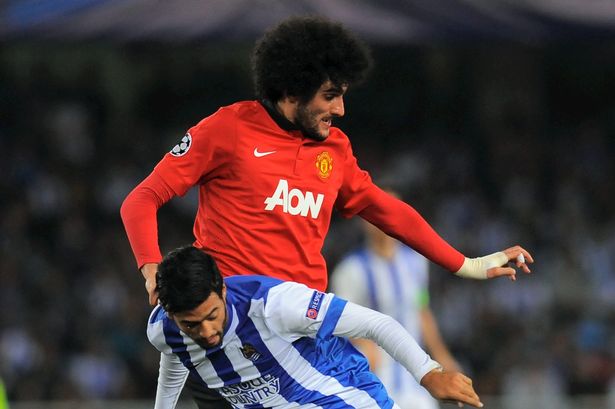 1. United started the game in comfortable fashion despite lacking any real urgency. Going into the game, I would have took a point away at Real Sociedad. They were awful at Old Trafford and I think we were all expecting an improvement from them this time around. However, it must be said that we were one dimensional in the first half. All of our play is sent out wide, we cross, it’s cleared, and then we repeat. Smalling started at right back and his crossing was far from good enough and that’s pretty crucial to how we play. You could say something similar about the second half but Kagawa played the last 30 minutes through the centre with Rooney substituted.

2. Can Fellaini run? No, I don’t mean walk fast or jog after the ball. I’d like to see him drive us on a bit. He has the physical presence to do so. Like other reds, I am desperate to see him do well but a lot of what he does seems mediocre. In the first half he picked up a yellow card for a foul that granted a warning. Following the interval, however, the Belgian midfielder committed foul after foul in a clumsy manner. As a result he saw red minutes from the end and will miss our away fixture against Bayer Leverkusen.

3. Our centre back pairing consisted of Vidic and Ferdinand. Both were solid throughout and Real Sociedad never really looked like scoring. Evra did well too, especially in the second half when he was called upon twice to clear the line. A defensively solid performance. Perhaps our biggest positive of the night.

4. We missed two sitters in the second half and could have probably won 3-0 given the opportunities we created. Javier Hernandez and Robin van Persie will both feel let down for not putting theirs away. The latter also missed a penalty after Ashley Young went down far too easily inside the box. Was there any contact? Yes, a small bit but not enough to take Young down. He made a mountain out of a molehill.

5. Ryan Giggs completed 90 minutes on his 950th appearance for the club. What an achievement. Bring on the next 50.