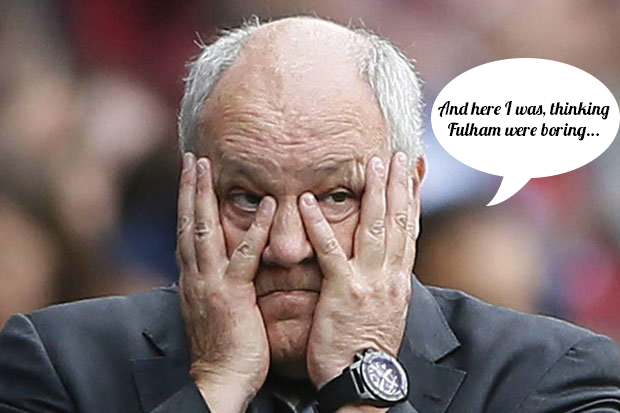 For the first time this season there’s a gathering sense of momentum about Manchester United under new manager David Moyes. Three wins in a row, including a 4-0 battering over Norwich in the Capital One Cup, will grant the squad the confidence boost it’s been crying out for. While performances may be average, Moyes is trying different tactics in search of finding what works best.

Craven Cottage is not a ground you look forward to visiting. In the past five seasons Fulham have taken eight points off United, so we should be wary tomorrow evening. Positioned fourteenth in the table, their fans are not the happiest at the moment. On a balanced note they’ve beat a tactically mis-managed Stoke City, a hapless Crystal Palace, lost to an exciting Southampton side and gone out of the cup after a 4-3 defeat against Leicester. So, going into today’s fixture, they’re back to square one whereas we’re hoping to continue our winning streak.

Martin Jol’s side are struggling to find form but you could say the same about United. Lets not get over excited about three wins, but we have to start somewhere. It’s certainly a building point; I just hope we don’t allow it to collapse again. The capture of Adnan Januzaj has given the club a boost. The 18-year-old only broke through a few weeks back from the under-21s and people are already expecting Premier League starts against the likes of Fulham, away from home.

A stroll through Twitter would suggest that the fans are not in the slightest happy with Jol. After two years in the job, some are calling for his head. Listening to Cottage Talk (see, I did research), they feel Fulham are light years away from securing a qualification place in the Europa League. Under Roy Hodgson in 2010 they reached the final but were beaten by Atletico Madrid. They have not reached such heights since which is hardly surprising.

Sitting in the K Stand last week for the 3-2 win over Stoke, I sensed real pressure on Moyes from the fans. It’s been built up in these early stages of his reign as United boss, but it has cooled a bit after three consecutive wins. It is a transitional period after all.

It’s only the beginning of November and people are already writing us off. Arsenal are eight points ahead of us in first place but I don’t think have the squad to pull it off, right up to May. Chelsea are two adrift of the Gunners and could may will be a good shout but despite being just two points ahead of us, City are still considered title considers. It’s early yet but it’s funny how the media operates sometimes.

“We’ll take one game at a time and try to start getting a bit closer to the top end,” said Moyes during his press conference on Friday.

“It’s a gap we have to try to work to get closer to. That’s the plan but there’s a long way to go. We’ve started to put together one or two half decent results and hopefully that starts to build a bit of momentum.

“We’ve been a little bit up and down at the start of the season, winning one, losing one, so we’re hoping to get a bit more consistency and then our form follows with that.”

Up front, Moyes has no shortage of options. Robin van Persie, Wayne Rooney and Javier Hernandez have all scored in recent matches. The Mexican is pushing hard to get more starts under his belt this season, scoring three in two games – although Danny Welbeck is another in the background, returning from injury.

In midfield Michael Carrick is the first name on the team sheet. The rest is like a constant rotation which is down to our new manager being undecided, perhaps dissatisfied, with his options. Marouane Fellaini is still off the pace but he has to play sometime. Your guess is as good as mine when it comes to who plays out wide because I’m all for starting Shinji Kagawa as long as it’s central and not on the left.

The main change I expect to see in defence is Rafael Da Silva replacing Chris Smalling at right back. The Brazilian offers more up the wing and is quick to get back and defend. Jonny Evans and Phil Jones have been paired a lot recently and I am beginning to think it’s our best combination at centre back regardless of Rio Ferdinand and Nemanja Vidic returning from injury.

“We will make changes,” added Moyes. “They’re all first-team players in the squad and in their own right could all be playing every week.

“I think both (Vidic and Ferdinand) are very close to full fitness. They showed that in midweek when playing Premier League opposition. They both played for 90 minutes so I can’t see any reason why they wouldn’t be ready to be selected or involved.

“Van Persie has been fine. He’s trained well and worked quite well this week so hopefully he will be okay. Welbeck has had a bit of fluid on his knee. He’s trained for a few days this week, but won’t travel to Fulham this weekend.”

Manchester United have won their last 6 matches against Fulham in all competitions.

One response to “Preview: Fulham host United at Craven Cottage”