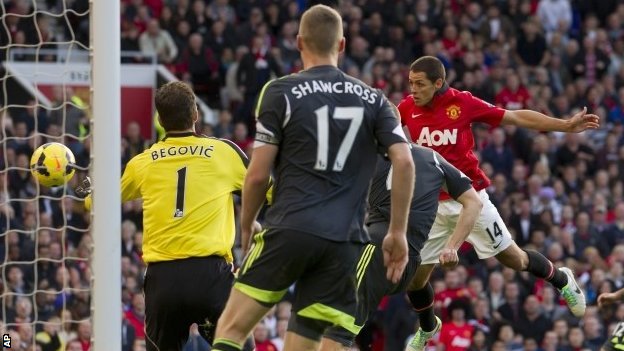 The minute Javier Hernandez came onto the pitch, all seemed right. Understandably, Robin van Persie and Wayne Rooney can certainly handle their own in front of net; however something about the Mexican international drives me simply insane.

On Saturday, those in attendance at Old Trafford erupted as well when he netted United’s third to put the reds in front of Stoke City.

The air felt as if Sir Alex Ferguson was leading his men into one of his famous late come from behind wins – expect this time, it was David Moyes whom saw United sneak past Stoke. While it’d be irrational to say that Manchester United have turned the corner with this result, a performance like this evening was one that United supporters, and Moyes’ boys truly needed.

Moyes began the match content with Michael Carrick and Tom Cleverley patrolling the middle of the park, with Shinji Kagawa, Rooney and van Persie working the advanced positions. It became quickly apparent as the match went on, United were going to need to throw everything in the kitchen sink at Stoke.

Stoke City employed their usual counter-attack style bulling the reds off the ball to begin the match, making it quite clear that Smalling was uncomfortable. With Rio Ferdinand and Nemanja Vidic given rest, Moyes entrusted both Jonny Evans and Smalling to uphold their defensive duties – which in reality, they faired decent at best. Ultimately, it’s a partnership which will develop in time.

After the first 45 minutes, the groans throughout Old Trafford seemed contagious. Whilst Nani wound up for a 30 yard shot, it seemed as if the groans were increasingly becoming harsher.

David de Gea continued on with his fine form, with a few instinctive saves on both Peter Crouch and Jon Walters – quite Peter Schmeichel-esque.

Until Moyes’ tactics changed in the second stanza, it felt as if United were about to let Saturday’s contest slip away. As Moyes threw on every available striker, every ball seemed to find the box. Tony V was his usual relentless self, along with wonder-boy Januzaj whom settled the match down quite well.

The substitutions of Adnan Januzaj for Nani, Hernandez for Cleverley and Antonio Valencia for Smalling quickly gave rise to a bit more direct play. The reds quickly threw everything into the box; it only seemed a matter of time.

As United entered the final quarter of an hour in a losing position, there would be no mutiny in Manchester. Two headed goals in as many minutes from Rooney and Chicharito provided heartbreak for the visitors, and pure elation for the reds.

Moyes seemed to lull the supporters into a false sense of security when asked about this afternoon.

“Very good, exciting and I really enjoyed it,” said Moyes.

“Stoke have not scored many but they have not conceded many either, so we knew we would have to work hard after going behind. I was worried it wouldn’t come – especially when we were 2-1 down. But I think we deserved it in the end,” he continued.

A good three points, yes. After putting forth a good performance only in minute spurts, I’d say that Moyes is fooling no-one.

We now wait for a performance like United had over Swansea City to begin the Premier League season – one full of sublime skill, a healthy squad, and even a few Danny Welbeck gems. As the season progresses, we must now be wary of slipping up too much beyond recovery. Arsenal seem to show no signs of slowing down to wait for the Moyes train – it’s about time the reds step on the pedal and surge towards the top.