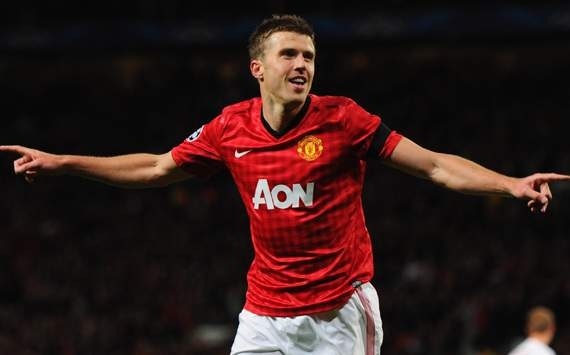 Today’s Metro featured a story about midfield maestro Michael Carrick and his contract situation. It seems as though David Moyes has recently prioritized keeping his star players. Having already secured Adnan Januzaj for another 5 years, Carrick looks set to follow suit, according to the Metro.

Seeing a host of experienced names on the expiry list has given cause for concern in recent weeks, Carrick’s name still sits there alongside captain Nemanja Vidic, Rio Ferdinand, Ryan Giggs and Patrice Evra. Although the respective futures of the final three there are still uncertain, Moyes sees extending Carrick’s and Vidic’s deals as paramount.

The Metro reports that Carrick will be offered a 2 year extension, with the option of a 3rd year. This would entitle him to a well deserved testimonial. Carrick has slowly grew in stature at Old Trafford, especially last season, when Paul Scholes took a back seat and eventually called time on his career. Carrick was our Mr.Consistent, barely missing a game and playing a pivotal role in the heart of our midfield.

Although he has had a slow start to the season, this is not uncommon for the Geordie man. He was a periphery figure at the start of the 2011-12 season, Anderson and Cleverley were the men in possession then and wooing the crowd. Last season saw him start a tad slow but he grew into the role of being the main man in the middle, the fans eventually showed their appreciation with a new chant, something the modest Carrick played down.

The Metro states that Carrick will stay on his £75,000 p/w wages for the duration of his new deal, there should not be any problems as Carrick said last season that he would never want to leave a club like United.

After that, Moyes will seek to tie down our captain. He only recently turned 32, but he is still an influential figure in the dressing room, and when on song there is no-one better. His experience will be invaluable to Moyes, who is still learning in the job. Moyes recently gave Vida some serious praise, stating that ‘he is the best defender I’ve ever worked with’.

Although we may see some old-heads make way next summer, probably Rio and want-away Patrice Evra, keeping Vidic is surely a priority. The younger generation like Smalling, Jones and Evans, to a lesser extent, will be learning everyday from the Serb, I don’t think this season would be the right time to lose our captain. Especially as we may lose 2 big voices in the dressing room in Ferdinand and Evra. It could be like Moyes not retaining SAF’s backroom staff and going in with a whole fresh look, it is important there is some sort of consistency, losing all three might be one too many.

Which is why Moyes and Woodward should be putting the finishing touches to Carrick’s and Vidic’s deals ASAP.

One response to “Carrick set to end contract speculation”