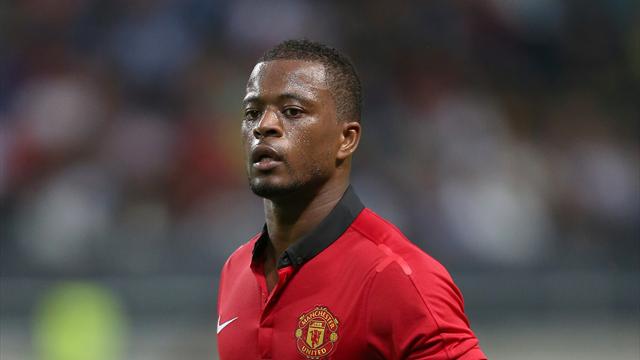 In a revealing interview to one of France’s more renowned media sources Téléfoot, Patrice Evra has let slip that he will leave Manchester United when his contract expires next summer.

About his contract situation at United, Evra was asked, ‘Your contract expires in 2014, does this bother you?’

His response was emphatic,

No, not at all. It’s personal. It’s not United that don’t want me to sign a new contract. This whole thing is personal. United’s dream is that I finish my career there, but it is something personal.

No-one can doubt the fact that Evra has been a great servant and one of Fergie’s better buys. He has come a long way since his rude-awakening against that lot on his debut in 2006. He, almost immediately, became an inherent believer in the club’s history, standards and traditions. As a result of this understanding, he became an important voice in the dressing room, which saw him captain United in the absence of Nemanja Vidic, and is still the current vice-captain.

He had to show unbelievable resolve and character in the wake of the race row with Luis Suarez, for which he had our unconditional support and backing. Evra, in his peak, was on a par if not better than the seemingly untouchable Ashley Cole. You could always rely on Paddy to give it everything, this whole-hearted commitment took him to our hearts.

That cannot hide from the fact that his standards have waned somewhat, probably due to the lack of competition in that left-back spot. For around 4 years, Evra was virtually unchallenged and knew that he would be one of the first names on the team-sheet. This slipping into a comfort zone, combined with a sometimes overly cavalier approach, has left us very vulnerable down that left-side and teams are currently exploiting that to good effect.

So, what could Evra possibly mean by ‘personal’?

The retirement of SAF? Moyes’ glaringly obvious ploy to yet again work with Leighton Baines? Does he want to end his career back where it all started, in France?

In the summer, our pursuit of Baines was not seen to be a necessity, rather a luxury. On the contrary, Moyes’ attempts to sign Baines now appear to have merit. Baines has probably usurped Ashley Cole for country now, and thus stepping into his shoes as the most potent left-back in the country. When you see Baines placing free-kicks to perfection with ease, and planting pinpoint crosses on Wayne Rooney’s head for England, one can only imagine the kind of ammo he could provide for our front-line, who have been starved of service this season.

Fans got the chance to see another candidate to sit on Evra’s throne on Saturday. Luke Shaw is one of the more coveted youngsters in England. With good reason, he has become yet another player to graduate from Southampton’s illustrious academy system, but would surely come with a hefty price.

Either would be a welcome addition and it seems like now is the time for David Moyes to start turning heads and making inquiries, especially as doubts persist over Fabio’s and Alex Buttner’s capabilities to succeed Evra.

One thing is for sure, they will be big boots to fill, Evra will go down as one of our better buys and will also be a massive loss in the dressing room. With Nemanja’s contract also up in the summer, there could be a potential changing of the guard.

This is definitely something Moyes will need to address before Paddy finally says ‘au revoir’.

Come January, it will be time to part with some serious cash to land either Baines or Shaw.