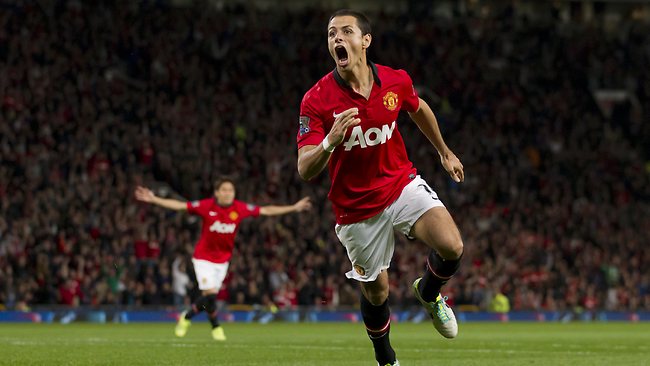 Javier Hernandez has been quoted in the Mexican press ahead of this week’s International fixtures as being frustrated at United. The Mexican has only mustered 2 starts this season, the trend of being an impact sub has continued into the David Moyes era, having earned the simplistic tag under Sir Alex.

When players return to their respective homelands, they can often be subject to misinterpretation and misquotations in abundance. This has happened in the past to Anderson, Antonio Valencia and Nani. Players seem to speak more openly in their own environment without the hullabaloo and pestering of the English press.

Anyway, here is what Chicha said to the Mexican TV Station,

“I strive for that [to start more games].

“I am working towards that – earning a spot as a starter. I know that my performance on the pitch will allow me to achieve that goal someday either here [in Manchester] or elsewhere for any other club.

“I am going on four years here [at Manchester United] and really, like I have always said, I am happy to be able to play for one of the best clubs in the world, doing my best every single day to earn more minutes on the pitch.

“I just need to be given more opportunities to showcase what I can do, because all of us want to be able to contribute our part so this team can win championships.”

“What better way to compete anywhere in the world than to compete with them? The competition inside the team has always been really healthy and I think that helps the team a lot, because there are so many quality players that every one of them wants to earn a starting spot.”

The notorious spin tactics employed by the press over here have translated Chicha’s comments into a pseudo-ultimatum- ‘play me or I’ll leave’ in effect. They have failed to recognise that he stated his continued happiness at playing for the club of his dreams and that he in fact relishes the added competition provided by Wazza, RvP and Welbeck.

The argument that Chicha is far too good to merely warm our bench and start the odd game is valid and one that I concur with. As the 3rd/4th choice striker, Chicha’s pace, movement and natural finishing make him a manager’s dream and a real threat whenever and whatever the occasion. He has the uncanny knack of being in the right place at the right time and one of the more natural finishers in today’s game. This means that his contributions could be invaluable: He guarantees 10-15 goals even in his peripheral role, the perfect example was last season on Boxing Day, turning draw into victory in the 90th minute against Newcastle , opening up a 6 point gap at the top which gave us the platform to kick on.

With us likely to challenge on all 4 fronts again, the workload will undoubtedly test the squad and there will be rotation to manage such a grueling schedule. This means that Chicha will most certainly figure on a regular basis. His aim is to be a regular starter for us, and his time will come. At the moment, he is a safer bet down the middle than Danny Welbeck, who when played there against the blue lot was not at the races at all. Welbeck has in fact been used on the wing recently, like SAF did last season, his work-rate and energy is suited to that role. Chicha down the middle creates more space for Wazza in behind to pick his passes, as Hernandez always plays on the last defender, making him such a nuisance to mark and handle. News broke last night that RvP had a minor toe injury with Holland, so Hernandez will always be in the frame to start or at least make a telling impact off the bench, like he has done on so many occasions.

Chicha has never been one to rock the boat, his affection for United would ensure that any discontent at not playing will be transferred into working even harder on the training ground and when he gets the chance to perform. This is exactly the attitude that a manager looks for when assessing his squad.

Moyes has already seen the quality he possesses first-hand, his superbly improvised finish against Liverpool underlined his class as the serial poacher and cut Moyes a lot of slack as the pressure was just starting to build after that worst nightmare at city.

Moyes knows if he needs a goal, then Hernandez will more often than not come up with the goods. Natural finishers are an invaluable commodity in the modern era, you cannot put a price on their importance. Which is why Chicha will not have to wait too long to terrorise defences and bring out his trademark ‘C’ celebration.