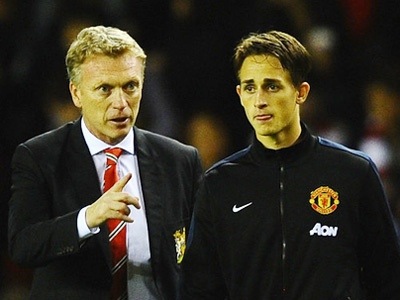 There are many benefits of following youth football, but as a Manchester United fan and a youth historian, there is no better feeling than seeing a youngster develop through our youth system and make it to the first team.

At Manchester United we take pride in the fact that we have been the most successful British club in doing this since the 1930’s.

When David Moyes announced the squad for the pre-season tour, it was with particular delight to see Jesse Lingard, Michael Keane and Adnan Januzaj amongst those on the list.

As the regular season got underway, I was hoping that we might see more of Jesse Lingard, however the progress of Adnan Januzaj has been a major plus and something regular youth team followers have been predicting for some time.

So after watching the young Belgian take the Premier League headlines on Saturday evening, and rightly so with a magnificent performance, many fans re-opened the Paul Pogba debate. Maybe, it’s never been fully closed, but when Ravel Morrison’s scored a superb solo goal for West Ham today…bloggers, tweeters and forum posters were out in force.

“United cocked up in letting Pogba and Morrison go…”

“Fergie should have just paid Pogba whatever he wanted…”

“Is there a buy-back clause?”

As a consequence, I thought I would share my understanding of the facts, why I believe Alex Ferguson was 100% correct in letting both players move on and why the Januzaj situation is very different.

So, that’s basically it.

I spoke to another agent who looks after youth players at the time and in their opinion Pogba was ‘badly advised’ and the United offer was ‘in line with other players of the same age, experience and potential’.

So either he or his agent was asking for ‘guarantees’ that were not forthcoming – understandably – and Ferguson was reluctant to give someone a start in an important league game whose form didn’t merit it. In addition, breaking wage and pay structures causes all sorts of problems throughout the club.

Some people have also mentioned that Pogba was upset that Scholes returning put him further back in the queue. When Tom Cleverley was asked about Scholes return…he said he was ‘delighted because he had the opportunity of learning from him…’

An interesting difference in attitude compared to that of Pogba. Fundamentally he left because he/his agent were impatient and wanted to dictate terms to the club.

Other more famous players have tried that in the past and got nowhere.

Finally, imagine if the club tripled his wages (or whatever) and guaranteed him 30 starts. Then his form dipped…or he didn’t progress the way everyone had hoped. Playing in the English league is a million miles away from Italian football. What do we do then? His contract would say we HAD to play him. What a ludicrous situation.

Pogba just didn’t want to play for us so the club couldn’t keep him. He was out of contract and you need two parties to sign a new deal. You can’t lose something you never had. We never had his total commitment to our football club.

In all my years watching youth football you can rarely say “he is a cert…!”

Ravel Morrison was one of the most talented footballers I have ever seen come through the system. Having joined the club at seven years old, a self-confessed Arsenal and Thierry Henry fan, he was special from the start. By the time I started watching him at 13/14 he could do everything.

His talent is unquestionable….he was a ‘cert’.

Unfortunately for the young Mancunian, his problems off the pitch were worrying. Coming from a severely fractured upbringing his teenage years were a catalogue of personal misdemeanors. I won’t go into detail but an average Google search will show reports of gangland fights, witness intimidation, theft, violence, periods of truancy from the club, refusal to train, amongst other episodes, all of which left the lad with a criminal record.

And it was getting worse.

The club tried getting senior professionals such as Rio Ferdinand to help as a role model. They put him is stable digs with other families. They gave him psychological counseling. When everyone had given up on Ravel, Alex Ferguson still wanted to give him another chance…so aware of his precocious talent.

Unfortunately, the type of behaviour being ‘allowed’ or at least being ‘accepted’ was causing problems amongst many of the junior players.

“Why should I come into training if he doesn’t?”

The club is always bigger than any individual and Ferguson eventually decided to transfer him to another club. A change of scenery was probably best for both parties.

So, two highly talented youngsters with exceptional potential were both unable to make the grade at United for two very different reasons. Both were given chances in the first team with Morrison looking the more comfortable at that level.

Which brings us to Adnan Januzaj.

Firstly, the Belgian teenager of Albanian heritage has none of the off the field issues of Morrison, nor does he have the inconsistency of display or attitudinal issues of Pogba.

When he arrived at the club as a skinny 16 year-old in March 2011, his talent was easily recognised. The drop of a shoulder, the short burst of pace, the ball seemingly tied to his boot-laces and the complete nerve-less-ness. So similar in fact to a young Belfast teenager who arrived at the club 50 years earlier.

Januzaj worked his way through the U/18’s and was included in the 2011/12 Youth team before injury curtailed his campaign. The following term saw him progress further as he started to ‘fill out’ and once again saw Youth Cup action versus Burnley in December 2012.

It was a major turning point.

United put in a woeful second half display and Alex Ferguson went into the changing room after the game giving Januzaj in particular the full force of his invective. The manager made it clear that he thought the youngster was ‘coasting’, ‘wasting his talent’ and it was the display of a ‘pussy’. He was told he would be elevated into the U/21’s and he was expected to show exactly what he could do.

The transformation was instant. His displays for the second string were consistently impressive – consistent being the key word – while he also matured off the pitch. He was rewarded at the end of the season when he was named on the bench for Alex Ferguson’s last ever game in charge.

How poignant would it have been if the teenager also became the Scot’s last debutant?

But here is the real difference between Pogba, Morrison and Januzaj…when he got his first team chance he took it.

Januzaj looked good on the pre-season tour. He looked even better in Rio Ferdinand’s Testimonial. He made his competitive debut in the Charity Shield and kept progressing. So when United were looking for a spark in Saturday’s game against Sunderland Januzaj stepped up and made the difference. His first goal was great movement off the ball as much as a clinical finish. His lack of celebration was a sign of his mental toughness. His second strike was a touch of class…beautifully executed…a joy to watch.

Januzaj has made it tough for Moyes to ignore him. He has put greater power into his negotiation kitbag. His performance on the pitch, and his attitude off of it, has allowed him (and his advisors) to lay down the gauntlet to the club. Something neither Pogba nor Morrison were able to do.

We have the best record in the football league of bringing kids through and giving youngsters a chance. We don’t need to look in the mirror at all when it comes to youth development. However, with his contract terminating at the end of this season Januzaj has created a sense of urgency I’ve never seen before at our club…and for once I am with the majority…Manchester United Football Club…David Moyes…just get him signed!

Finally, I hope that Paul Pogba and Ravel Morrison have fine careers in the game and go on to fulfill their potential. But they play for other clubs now and I think it’s time for supporters to move on…there is more talent on our doorstep to get excited about.

Tony Park is a Manchester United Youth historian, statistician and co-author of ‘Sons of United’. Follow @mrmujac on Twitter and buy his book.

16 responses to “The Rumours and the Reality – Pogba, Morrison and Januzaj”