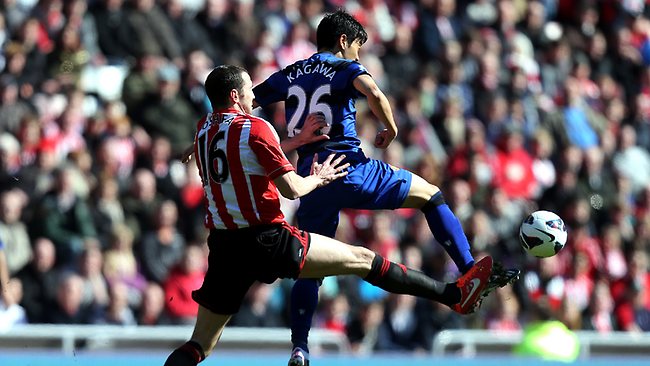 Can we see a glimmer of light against Sunderland this weekend? For heaven’s sake, it’s quite unsettling when Manchester United drop three points to West Brom,  Manchester City, and Liverpool. After only claiming seven points from six games in the Premier League, we still have countless naysayers in regards to David Moyes’ appointment with United.

This Saturday, United head to the Stadium of Light to face a Paolo Di Canio-less Sunderland. Interim manager, Kevin Ball will resume the reigns of Sunderland after a League Cup win over Peterborough and a loss in the Premier League to Liverpool.

Moyes needs to configure himself with the reds, and while many hope he does that sooner rather than later, the Scot, I believe – is still up for the task. Enough with the calling for his head, and while those scousers are nowt going to stop unless we win the treble – off with them. Enough with the plastic reds who moan 24/7, and enough with the negativity to Ed Woodward. He didn’t bring us who we may have wanted, but it’s October so move on and get over it.

We’ve got Marouane Fellaini. He’s not here to score goals. Although after a tidy performance against Shakhtar Donetsk, it’d be nice to see him bag a goal in the mixer from a set piece. He’s been brought on to run the engine room, provide the coal which United have been searching for. And whilst Michael Carrick is a true footballer in every essence of the word, a more lively pep in his step will do loads of good. I, for one, love that Carrick. Brilliant on the ball, tidy in possession, and surely a man who gets everyone involved. And after a Man of the Match performance against Shakhtar, it definitely shows why he may indeed be our most reliable along with Nemanja Vidic.

United enter Saturday’s encounter looking to avoid three straight Premier League defeats for the first time since 2001. The last time this happened it was to Arsenal, Chelsea, and West Ham – the reds finished third that season. Were we cheering “Ta Ra” Fergie then? Some of you quite possibly, but he’d already been in the hot seat of Old Trafford for around 14 years at that time.

October 5th. The day of light.

As the reds approach the meeting with Sunderland at the Stadium of light, let’s expect a performance in its entirety. Vidic midweek urged his men forward, “I think this is a more important game. We need to get a few wins in a row. The situation is not bad compared to the teams who you would think will also be competing for the title, or at least the ones who were the favorites,” added the United captain.

He’s right. While a the slip ups seem to happening a bit more readily this season, better to happen early in the season then in the latter stages.

Rio Ferdinand looks uncertain for Saturday’s match as he continues to repair from a groin injury. As for Sunderland, Steven Fletcher will be out around six weeks with his shoulder injury. The trio of Andrea Dossena (thigh), Wes Brown (calf), and Phil Bardsley (foot) will all likely be sidelined as well.