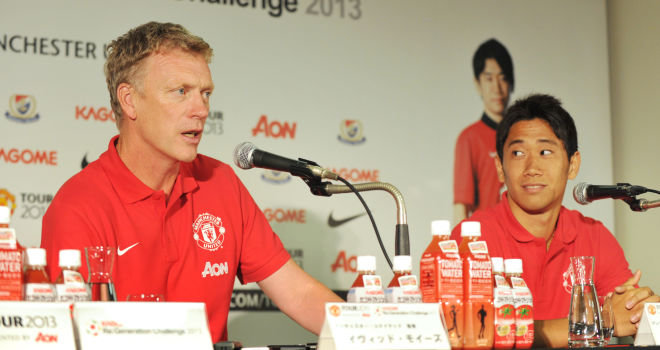 The mysterious case of our Japanese fans’ favourite Shinji Kagawa is mind-boggling and the source of great frustration for our creativity-craving supporters. His plight has even drawn management maverick Jurgen Klopp (who previously worked with The Shin) to tears, allegedly.

Quite exactly why Kagawa has turned from creative saviour to frequent bench-warmer is clear as mud. When he signed from Borussia Dortmund, he had just come off winning German player of the year, destroying Bayern Munich in front of Sir Alex’s eyes and playing an integral part in Dortmund seeing off Bayern to the Bundesliga title, against all the odds. He was seen as the Christmas present come early, the first attacking midfielder who could create a sackful of chances and be a genuine goal-scoring threat, something if truth be told we have not been blessed with since Paul Scholes was notching double figures year in year out in his late 20s.

The term ‘Glazernomics’ has become a major buzzword around Old Trafford in recent years, Kagawa fitted the bill of affordable alongside distinct class, very much adhering to the term. Snapping him up for a mere £12M at the time was seen as stellar business of the shrewdest variety, having taken advantage of the fact that Kagawa had ran down his contract, which was entering its final year.

Kagawa started off his United career in decent fashion, scoring on his home debut and looking like a crucial link between midfield and attack. As every foreign player experiences in their first season in England, Kagawa went through a lean spell in the winter, injury played its part too. He returned to the fold after Christmas and seemingly grew in confidence with every game, this came with the player continuing to adjust nicely with every passing day. His United career seemingly had lift-off when he single-handedly disposed of Norwich at OT with a sublime hat-trick, the 2nd and 3rd goals were of particular elegance and craft.

That game was seen as the making of Kagawa, and he was rewarded with a start in the Bernabeu just days later. Unfortunately his form tailed off a bit towards the end but overall, ‘The Shin’ had made steady progress, with some outstanding displays like Norwich and away to West Ham.

What cannot be disputed is that SAF left David Moyes a gem of a player, provided he was selected. Kagawa’s exploits in the Confederation Cup meant he was allowed some extra time off for some R&R. As a result, he didn’t feature in the opening stages of this season. This would have been fine if he was not in the 18, but the fact he was an unused sub against Chelsea, when his guile, craft and silky touches might have won us the game was puzzling to put it kindly. This must have meant that he was fit enough to make a telling contribution?

It does beg the question, does Moyes simply not fancy him?

Thus far he has only started 2 games all season, and he has subbed in both of them (Leverkusen and West Brom). Moyes said post-West Brom that he was taken off at half-time for ‘tactical reasons’, when by all accounts he was not the worst player out there. The problem for Kagawa is that Wayne Rooney is occupying his preferred position, and has been our shining light this season by a distance. Kagawa hasn’t got a sniff in that role when Rooney is on song especially if Moyes continues his polarising formation of 4-4-1-1, Wazza will always be in behind RvP.

When news filtered through that Rooney was injured for the Shakthar game, many, myself included, were of the view that Kagawa would easily slot into that position no problem. The man that matters most saw it differently though, and Kagawa was limited to his familiar position on the touchline with 6 others.

Although Kagawa is cutting a pretty disconsolate figure on the bench, he seems to have adopted the right mentality rather than publicly sulk, saying:

“I have to take this like some kind of message [from the manager]. I need to improve more and more, or I cannot survive at this club.”

Due to Rooney’s renaissance, Kagawa, when picked, has been deployed on the left side, the only feasible explanation for his absence has been his susceptibility defensively, offering no protection to the raiding Patrice Evra, making us very vulnerable down that side.

It surely cannot be down to lack of ability, because Kagawa earned ringing endorsements from SAF to Moyes when he left the title-winning squad. It surely cannot be down to a lack of physical prowess, not every player can be developed into a Yaya Toure or Fellaini, being of slighter stature has hardly been to Lionel Messi’s, David Silva’s, Juan Mata’s or Mesut Ozil’s detriment.

Hopefully the Shin gets his chance away to manager-less Sunderland who prop up the table, he could be the key to our first open play goal in the league since week 1 and exploiting their obvious defensive frailties. We have been devoid of creativity for a while now, this was all too painfully clear against West Brom and previously.

If not, Mr Klopp may well need some more consoling, as will most of our fans.

One response to “Is Kagawa wasted at United?”