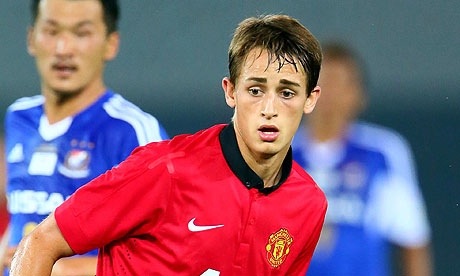 Adnan Januzaj, who many may not have heard of before a ball was kicked this season, is now the name on many peoples’ lips. The Kosovo born Belgian has been turning heads at under 21 level for around a year now and dazzled in his fledgling United career to date with some eye-catching cameos at Old Trafford.

Januzaj has brought something fresh and different to this United outfit- he is fearless. Supremely gifted with the ball at his feet, he has an innate ease and grace which allows him to run at defenders, meaning he has the ability to stretch defences and potentially create havoc.

A tricky, clever winger who is predominantly left-footed, the comparisons to Ryan Giggs have already begun. Last May, he received the biggest compliment you can possibly get in football, a ringing endorsement from Sir Alex,

the boy is a special talent

He was included on the bench away to West Brom in Fergie’s last ever game in charge, clearly looking to fast-track the youngster and involve him around the first-team as often as possible. Adnan was stunning in helping United secure last year’s Under 21 Elite Development title and he carried that form into pre-season, excelling on tour alongside Lingard and Zaha.

His league debut was a brief outing against Palace at OT, but what an introduction. He ghosts past players as if he was up against Sunday League opposition, he is always on the front foot meaning he can add a direct and bold dimension to our attack, which we have been missing at times this campaign. He instantly looked the part, in no way overawed by the occasion, many players could freeze on the big stage in front of 75,000 expectant reds. But not Adnan. He looked at home.

Januzaj emphasised his class with this sumptuous goal in the reserves on Monday night, showing that he has almost everything going for him. (http://vimeo.com/m/75802219)

The problem with all this attention is that once word gets out, the snipers are always going to be on the prowl for a bargain. Regrettably, Adnan’s deal expires at the end of the season. Although talks are ongoing, there is a somewhat familiar gloomy outlook that we have a déjà vu scenario which could be as disastrous as Paul Pogba’s acrimonious exit to Juventus. What we need from Woodward is focus and fast action (a Herculean task it seems), Adnan has already stated his happiness at playing for United, of course Sir Alex’s retirement delayed the resumption of talks, but the player has outlined his intention, make it happen or there will be revolts!

This explains why Adnan is being fast-tracked and utilised ahead of Wilfried Zaha probably. If he wants reassurances that he will be an important player in United’s future, he is certainly getting them from Moyes currently.

Which gives a lot of weight to the possibility that Adnan may well make his first start against Sunderland tomorrow. The wing positions are certainly up for grabs. Their patchy form that was last years panacea has continued into this campaign. No-one has really staked their claim with authority. The Mirror reported in the week that Adnan could be used ‘to save our season’ (http://www.mirror.co.uk/sport/football/news/manchester-united-want-starlet-adnan-2327298). Whether it is that desperate is open to discussion, but there is sense in Januzaj’s possible selection. He is direct and always looking to beat players, throwing him in against manager-less Sunderland might be the ideal time, it’s not like throwing him into a derby (like Giggsy was all those years ago). There have been complaints that RvP has looked isolated and we are not getting enough service into him. Adnan could create a shed-load of chances against their rickety defence.

It is the perfect game to unleash the Belgian. He is more than ready to bolster our creative woes to date.

It is vital that the encouraging springboard he has given himself does not result in him being stifled. There is only so much you can hold youngsters back, ‘if you are good enough, you are old enough’ goes the old maxim. Adnan’s fleeting cameos have demonstrated that perfectly.

Adnan needs games to feel like he belongs in this team, otherwise we’ll have a bitter pill to swallow come May, possibly even more bitter than the Pogba blow.

The kids are alright, don’t be surprised to see Adnan start tomorrow, it may well be the catalyst for better things. He is ready.