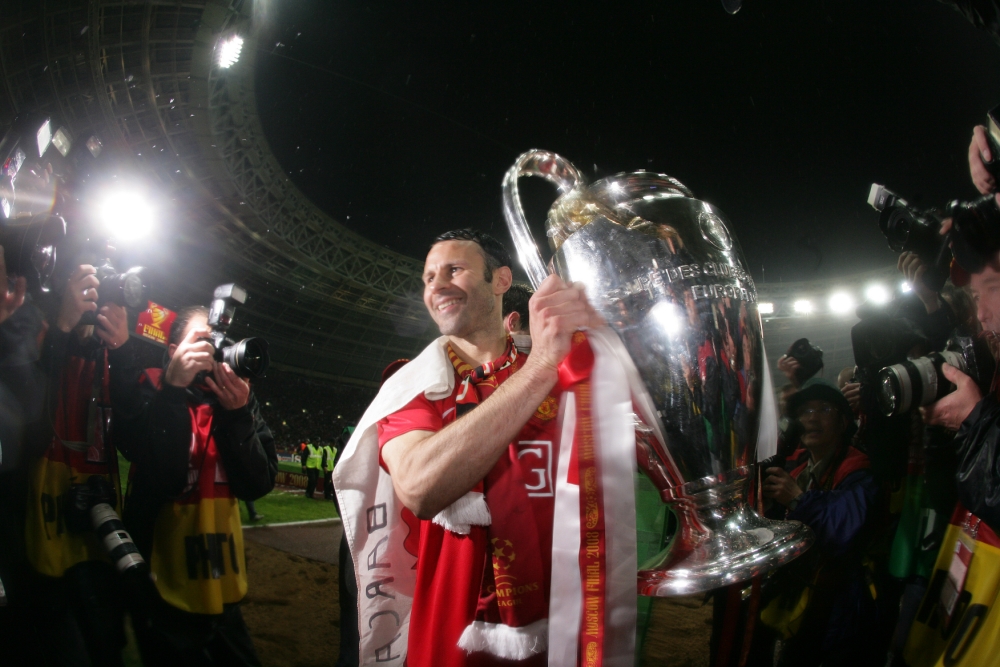 13 Premier League, 4 FA Cups, 4 League Cups, 9 Community Shields, 2 Champions Leagues, 1 Super Cup, Intercontinental Cup and Club World Cup, scorer in every Premier League season, United’s largest appearance maker, over 100 goals for United, I could go on, much like Ryan Giggs’ career. He has had the dream career, one that we all dream of but never realise. Giggs is an exceptional human being. There is not much more to win after seeing that eye-watering list of honours.

On Wednesday 2nd October 2013, Ryan Giggs made yet more history, he’s a bit greedy isn’t he! Replacing Marouane Fellaini in Donetsk, Giggsy surpassed Real Madrid legend Raul by making his 145th appearance in Europe’s elite competition. One of our most decorated footballers is up there on his own. Few can begrudge him of his success and honours over the years.

Few could have imagined that the skinny, jet-heeled winger that terrorised Premier League defences from as early as 1991 would still be playing at the highest level some 20 years later. It is testament to the man himself (and his yoga lessons I’m guessing) that he has managed this feat and adapted his game in order to prolong his playing career.

I know every time Giggsy’s name appears in centre midfield there is almost a collective shudder of trepidation and on the rare occasion that his standards slip the old line ‘he just should retire’ will no doubt be reverberating from the terraces. In fact, I made this very mistake against Newcastle on Boxing Day last year. He had a ‘mare in the first half and I was calling for the axe to fall on our legendary No.11. He had a blinder in the 2nd half and we won a classic 4-3 in the last minute. Rarely have I been more pleased to be so strikingly wrong then on that day, that was coupled with a City defeat at Sunderland. Beautiful!

So I am never saying that Giggsy should call it a day, the guy seems ageless anyway (besides the greys in his hair these days). His cameo against Shakthar was decent. He came on to try and change the game, at least he was always forward thinking and trying the killer balls to make a breakthrough. He still has that turn of pace that gave him a literal head start back in the day, remarkably for a guy approaching his 40s.

As cliched as the phrase is, Giggs is like a vintage red wine, he seemingly has got better with age. The pressure-alleviating win against Liverpool in the Capital One cup saw the Welsh wizard outrun and outplay current England captain and ‘lionheart’ Steven Gerrard, who was a virtual bystander in comparison. Since operating in the player-coach capacity, Giggsy seems to be playing with bite and fire in his belly, almost as if to reassure the fans that everything will be OK in the coming months and years. Giggs, who has been the constant in so many evolving United teams and generations, could be a key understated player this season. Despite taking himself out of the limelight somewhat in reduced playing time, his experience will be needed more than ever during these times of relative hardship post Sir Alex. He has seen it all, thus making him as important a figure in the dressing room as ever. He will surely be drilling the United ethos into David Moyes on a daily basis as he still searches for the right formula to correct the expected post-Fergie slump.

We have truly blessed to see Ryan Giggs destroy defences year in year out for over two decades. We will never see his like again probably.

Ryan Giggs, you are a true legend, sir.