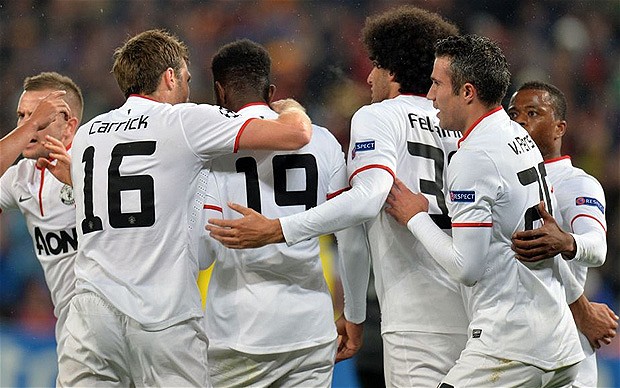 Manchester United became the first English team to not lose away at Shakhtar Donetsk in the Champions League with a 1-1 draw at the Donbass Arena. Danny Welbeck opened the scoring for the Reds but Taison equalised before the 80 minute mark.

With questions already being raised over David Moyes’ credentials as Sir Alex Ferguson’s successor being asked, his team performed a lot better than what they did against West Brom at the weekend, despite the absence of Wayne Rooney.

United started comfortably with the first real chance coming eight minutes into the game. A through ball from Tom Cleverley over the top of Shakhtar’s defence was controlled brilliantly by Robin van Persie, who took a swift turn before curling the ball over Andriy Pytov’s crossbar.

The home side had a lot of possession throughout the game but failed to do anything with it. They constantly pushed United, who defended well with Nemanja Vidic in the heart of defence.

There was a nail-biting moment in the first half however, when Cleverley took down Alex Teixeira inside the box. Referee, Pavel Kralovec, was right to allow play to continue given the lack of contact but we’ve seen them given before.

After eighteen minutes of play there was a stroke of luck for United with Welbeck slotting one past Teixeira from close range. The goal came from an incorrectly awarded throw-in to Marouane Fellaini. The Belgian midfielder did well to turn inside the box and square the ball towards a struggling Yaroslav Rakitskiy.

On the hour mark Fellaini went into the book for a challenge Antonio Valencia made. Prior to that, however, the 25-year-old had made foul after foul and lost possession repeatedly. It was not a night he’ll want to remember.

In the second half our style of play changed dramatically. United looked increasingly knackered as time went on and began to sat back and invited Shakhtar on. Before the game I would have took a 1-1 draw but the home side were there for the taking. With fourteen minutes remaining, Rakitsky sent a low cross into the box which Vidic failed to clear but instead knocked it into the path of Taison, who lashed the ball past David de Gea.

United remain giant leaders on top of Group A with Shakhtar in second. Meanwhile, Bayer Leverkusen beat Real Sociedad 2-1 in the BayArena.

Image courtesy of the Telegraph.