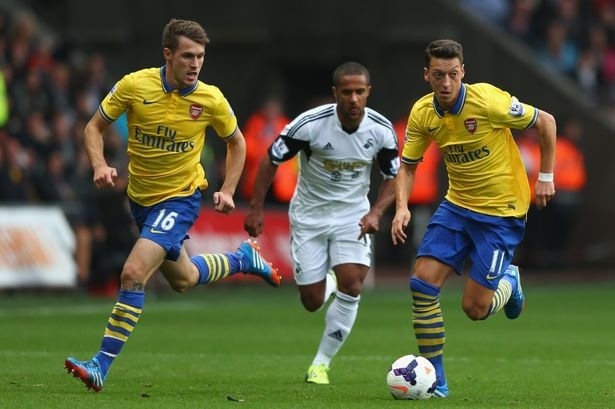 It has been an odd old season of the Premier League; some strange results have meant that until this weekend there have been no clear title or relegation front runners. Now, after six games, the Premier League table is starting to shake, starting to hint as to what the rest of the season has in store. At the bottom things are still foggy and one gets the feeling that teams such as West Ham, Newcastle and Norwich are underperforming and that the likes of promoted Hull and Cardiff, along with Stoke may find it difficult to continue solid starts to the season and are still relegation candidates. It is Sunderland that currently find themselves rooted to the foot of the table, but with definite quality in the squad, there is every possibility that a new manager may be able to galvanise and gel the team in a climb up the table. The only team that currently do look certain relegation fodder is Crystal Palace. Ian Holloway’s side have lacked cohesion, quality and although Holloway shopped like a man possessed in the window, no names really stood out as saviour material. Other than beating the hapless Sunderland, Palace have lost every game including in the League Cup against Holloway’s home town club Bristol City, a trend that looks set to continue unless there is a drastic turnaround.

The battle at the bottom is already fascinating, even at this early stage, but whilst Cardiff and Hull were both involved in fascinating games with Fulham and West Ham respectively, it was the fixtures involving the title challengers that were this weekend’s real talking points. Going into the weekend, the headline match was undoubtedly Tottenham versus Chelsea; master versus apprentice, Villas-Boas versus Mourinho. The compatriots reportedly fell out over Villas-Boas’ ambition to progress beyond serving as his compatriot’s scout whilst the pair were at Inter Milan back in 2009, with Villas-Boas joining Portugese club Académica in October of that year. With Villas-Boas later managing two previous Mourinho clubs, Porto and Chelsea, a rivalry has long been brewing between the pair, fuelled by Villas-Boas’ success at Porto and untimely and some would say unfair failure at Chelsea. Since the Special One’s return to Chelsea, relations have been very frosty between the pair, with Villas-Boas managing Chelsea’s London rivals Tottenham. After their tussle over Brazilian attacker Willian, the rivalry has simmered over into a full on cold war, with Mourinho snatching the former Shaktar and Anji player under the noses of Tottenham in an act of naughtiness that was presumably solely as a poke at Villas-Boas. Going into Saturday’s fixture, Mourinho’s silence was telling, whilst Villas-Boas’ brief comments on his former mentor confirmed that their footballing affair had ended in a break-up; “Our break-up point was because I was full of ambition… But he didn’t feel the need for somebody near to him…We had a great personal and professional relationship before that we don’t have now. I don’t think we need explanations. But our relationship broke down.” The stage was all set for a very tense game of football.

Perhaps somewhat disappointingly for neutrals, Mourinho and Villas-Boas both behaved professionally towards each other, and if they were cold, they were at least courteous. However, if the brief was to tread politely, someone forgot to forward that memo to Fernando Torres and Jan Vertonghen, with the pair taking up their managers’ rivalry, going at each other with heavy tackles and cross words all game. The battle eventually boiled over into a sending off, with Fernando Torres receiving a red card towards the end of the game, a decision Mourinho labelled as “bad” that “changed the last 10 minutes of the game that should have been our[Chelsea’s] dominancy”. Mourinho accused Vertonghen of simulation and stated that his actions made him a “disgrace”. However, for all of Mourinho’s ire, Torres’ dismissal was in fact quite fair, with his actions really giving referee Mike Dean little choice but to send him off. Torres and Vertonghen’s tussle began when a slight trip by Torres led to the Belgian taking a somewhat dramatic tumble. Although the actual challenge was innocuous, in the ensuing confrontation, Torres clawed at Vertonghen’s face, leaving notable scratch marks. To the former Ajax defender’s credit, Vertonghen managed to resist following the usual hand to face procedure of most football players and did not fall to the ground clutching his face as if he had been shot; Torres was fortunate to receive only a yellow. Tackles and bickering continued for much of the rest of the game between the pair, with both players pushing their luck with Mike Dean as his team. The incident that did eventually draw a red card and Mourinho’s wrath was what at first appeared to be a very physical aerial challenge by Torres. Replays showed that in actual fact little contact was made on Vertonghen by Torres and that the centre back’s reaction had been exaggerated. However, by this stage Torres had become incredibly overzealous and really did leave Mike Dean with little choice but to send the Spaniard off after he spurned chance after chance to calm down and focus on getting a Chelsea winner.

In amongst all of the drama, a game of football did break out; a well-crafted move was capped by an excellent Sigurdsson finish as Tottenham took the lead within twenty minutes having bossed the opening stages. After half time was all Chelsea however, with the introduction of the neglected Mata inspiring Mourinho’s side, with Chelsea looking the favourites to go on and win after Terry’s 65th minute equaliser. Torres’ red card dampened that, and whilst both sides may rue not gaining a leg up on their title and top four rivals, neither is likely to be too disappointed with a draw either. With the Tottenham-Chelsea draw Saturday’s early fixture, most expected the two Manchester clubs to subsequently steal the initiative in what should have been straightforward wins for both clubs; City were in the ascendancy and faced a Villa side that had been woeful at home of late, United on the other hand were the wounded animal after last week’s derby thrashing and fans were expecting their team to fight back and punish West Brom at home. City and United both lost. It seems Lambert has figured how to get his young Villains to replicate their away form, by getting them to play like it is an away match; a back five was drafted in and the Birmingham club were devastating on the counter attack as they conceded all possession to City. Pellegrini will rue the lost points, but will take solace in the fact that despite the 3-2 score line, City were by no means terrible, but fell prey to a very clinical Villa side who took advantage of every little mistake made. David Moyes can take no such comfort. Having already failed to endear himself to the Old Trafford faithful through his ineffective summer transfer dealings and a loss to Liverpool, fans were now furious following the 4-1 dismantling last week to Manchester rivals City and were demanding a response. Slumping to a 1-2 defeat to West Brom at home was hardly the expected reaction. Limp going forward, it was United’s shoddy defending that will really concern fans, after the backline of Evans, Ferdinand, Jones and Buttner found themselves out of position time and again, repeatedly exposed by the pace and trickery of trio Berahino, Amalfitano and Sessegnon, with the former pair both scoring.

The manner of the defeat was very un-Manchester United; after going behind there was never any real threat of another famous comeback victory. In the days of Sir Alex Ferguson, from the moment England under-21’s striker Saido Berahino grabbed West Brom’s second an onslaught would have begun, substitution would have been made and there would be three or even four strikers on the pitch looking for goals. There hasn’t been that bravery under David Moyes so far, already bemoaning his lack of rotation, fans will no doubt be flabbergasted that Welbeck remained on the bench and that although van Persie was introduced, he was done so at the expense of Hernandez. There was no second equaliser, with Rooney the sole United name on the score sheet to continue his remarkable transition from outcast to lone standout. Not every title contender passed up three points this weekend though, and it is the two winner Liverpool and Arsenal that now occupy the Premier League’s top two places. Liverpool have refused to go away so far this season and have shown they are back with the big boys and ready to challenge for honours again. An injury to Coutinho threatened to disrupt Brendan Rodgers’ sides’ marvellous start to the season. The Brazilian’s near telepathic relationship with Daniel Sturridge had been key for Liverpool so far, but fans needn’t have worried, after a disappointing League Cup loss to Manchester United, Liverpool returned to winning ways with a 3-1 victory over Sunderland. Suarez has slotted seamlessly into the Coutinho shaped whole in the Liverpool side and seems to have inherited his predecessor’s psychic bond with Sturridge, the Uruguayan was assisted by Sturridge for both of his goals by Sturridge, the Englishman also on the Sturridge.

Brendan Rodgers is a rightfully happy man, with his side exceeding expectations, and is no doubt looking forward to watching more performances like that from the striking partnership he insists “can be the best in the country.” However, the Premier League manager wearing the widest Cheshire Cat grin this week must be Arsène Wenger. With his side ruled out of the title race by many before the season even started and by most after their opening day defeat to Aston Villa, Arsenal have gone on to win five consecutive Premier League games since then, that run continuing with Saturday’s 3-1 dispatching of Swansea. With a rejuvenated strike force now being fed by the creator extraordinaire that is Mesut Ozil, Arsenal have shot up the league, setting the pace in the title race. One of the main reasons behind Arsenal’s success so far this season has been the form of the resurgent Aaron Ramsay, who scored his eighth goal of the season in all competitions against Swansea in only his ninth appearance. Another of Arsenal’s successes has been their ability to overcome injuries, with Serge Gnabry particularly impressive in place of Theo Walcott; the eighteen year old scored the other goal in Arsenal’s victory over Swansea in his third start this season. With Mourinho suffering teething problems at Chelsea, Tottenham and Manchester City performing in fits and spurts and Manchester United seriously struggling post-Ferguson, it is the unfancied Liverpool and Arsenal that lead the pack in what promises to be a fiercely close fought title race.

One response to “A Week In Football: Arsenal and Liverpool capitalise as title contenders flounder”