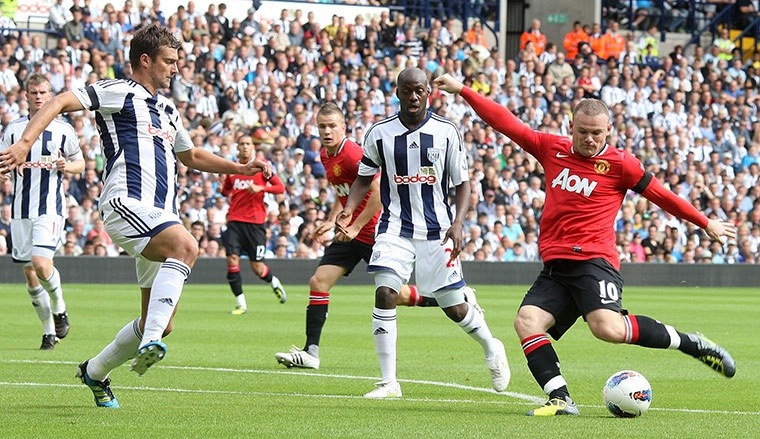 Time to get back to winning ways on as Manchester United host West Brom. Whilst it may sting that United surrendered a lead in Sir Alex’s final match in that thrilling 5-5 draw at the end of last season, David Moyes’ squad seem to be heading in the right direction. After a victory over Liverpool in the League Cup in which Javier Hernandez tallied the lone goal, the Reds seem prime and ready to get back to their winning ways.

The humiliating defeat in the Manchester derby last weekend was surely heart breaking; however, it may have spurned the reds onward. Luis Suarez luckily took no bites out of the United defense as David de Gea seemed fairly comfortable all evening.

Steve Clarke’s side enter the match on another low after bowing out of the League Cup in penalties to Arsenal. Clarke will likely recall Boaz Myhill in net, and rely on Nikolas Anelka to man the striking duties. While Anelka surely is not in the heyday of his career, the Frenchman is rightly capable of carving up defenses.

David Moyes may also be tempted to start Hernandez after his goal against Liverpool. With solid performances from both Shinji Kagawa and Nani, Moyes may also be hard pressed to start those two as well. Again, it may be best if Robin van Persie sit this one out so that he’s able to fully recover from his groin injury; however, it would not be a surprise if he featured in a limited role should United end up searching for a goal.

Some (unrightfully so) have been calling Moyes’ name recently indicating he’s not the man for the job. Enough. The Scot’s been in charge for just five League matches, give the entitlement a rest. When asked if the beginning of United’s season has been frustrating, Moyes quickly shot down the speculation.

“It’s not frustrating. I will sort it. I will fix it. I will turn it around. I have no doubt about that,” explained Moyes.

While that answer may be short and to the point – some may take ask even more questions of whether or not he’s mildly worried with United’s start. After starting out with one of their worst records in around ten years, United will be fine. All is well at Old Trafford – there will be no sinking of the ship.

“Wednesday was a big game for us. We had lost at Anfield a few weeks ago, and at the Etihad on Sunday, and we wanted to put that right,” added the reds manager.

And put things right they did.

Now, United must take on a struggling West Brom side. West Bromwich Albion have won five of their last 23 Premier League games, according to Yahoo Eurosport. While that statistic may be upsetting for West Brom supporters, here’s another: United have won 15 of 18 of the meetings between the two clubs – and three draws.

However, the reds must be wary of their defensive struggles. According to Yahoo Eurosport UK, United have conceded 11 goals in the last six Premier League matches, one more than they have let in during the previous 18 matches. A concerning piece of information as Nemanja Vidic and Rio Ferdinand were ripped to shreds in in the derby. We were given a bright light as Jonny Evans and Chris Smalling featured well together against Liverpool. That partnership has been a long time in the making, and we can all breathe a sigh of relief that we’ve secured natural replacements for Rio and Vidic.

With Rooney in rich form, and likely to get the nod up front with either Hernandez or Danny Welbeck, United should be in order to obtain three points. Michael Carrick and Marouane Fellaini will handle the midfield duties, with the towering Belgian missing out on United’s League Cup win as he’s cup tied to Everton.

There we have it – can Moyes and his men silence the remaining critics? Likely not, but with another win it may keep them a bit more subdued for the time begin.