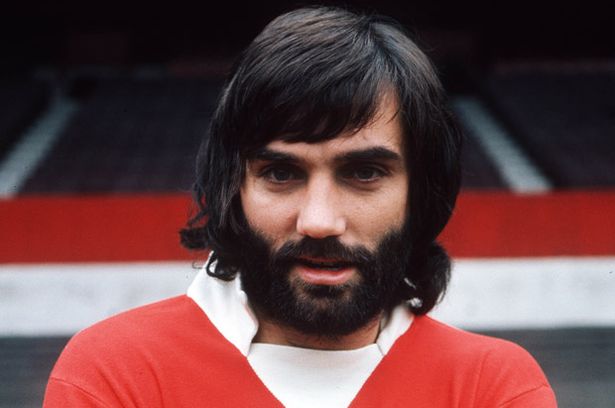 Let me come clean straight away, George Best was, is and always will be my hero. Anyone that’s ever pulled on a shirt for Manchester United has been my hero and some like Law, Charlton, Cantona, Keane, Robson, Giggs, Rooney and Ronaldo have shone brighter in the Old Trafford galaxy than others. But George Best arrived on the football scene at the same time I began a life-long love affair with the game. The heady cocktail of Best magic and football-dependence forge a bond no other player could surpass. .

In May 1963 I heard of United’s great exploits in winning the FA Cup against Leicester. Still only 9 by the start of the following season, I was considered by my mum to be too young to stand on the Old Trafford terraces with my dad. So a compromise was reached where he took me to watch the reserves every other Saturday and any mid-week Youth Cup match. United’s youth team that season contained several players who would go on to win league, European and international honours. John Aston, Jimmy Rimmer, John Fitzpatrick, David Sadler and Willie Anderson were United’s class of ’64 but the jewel in the crown was a 17 year-old Irish winger by the very appropriate name of George Best.

George had signed amateur terms with United in May ’61. In the opening United Review of 61-62 several new juniors were mentioned by name but the only reference to Bestie was “a number of boys from ‘across the water’ are showing their paces in trials and any that measure up to the high United standard will be retained and no doubt be catching the eye in these notes as the season progresses” No doubt George measured up and soon his name started to appear in reports of the ‘B’ team then after Christmas ’61 in the ‘A’ team. The first half of 62-63 saw our young prodigy back in the ‘B’ side but again after the turn of the year he was playing and scoring for the ‘A’s. On 24 April 1963 he made his debut for the Youth Cup team in a 3-2 win over Newcastle.

The summer saw United sign George Best on professional terms but the club were keeping their rising star under wraps. There were very few reports in the official programme or Manchester Evening News about him. Yet by the end of 63-64 our darting winger would be a first team regular and Irish international. He started in the Reserve team in August but within a month Matt Busby had bloodied the skinny lad from Belfast in the First Division. It wasn’t a poor run by the team that forced Matt’s hand, United had started the season well with 4 wins and 2 draws and sat top of the league on 14 September 1963 when second placed West Bromwich Albion arrived at Old Trafford.

The manager didn’t tell George he was playing until the pre-match lunch was digested. After receiving a few whacks from Albion’s tough fullback Graham Williams, Bestie switched wings, regained his confidence and put in a ‘competent’ shift in a 1-0 victory. A crowd of 50,453 witnessed the debut, I wasn’t one of them but the following week George and I were at Old Trafford as United Reserves beat Huddersfield 3-1. He would have to wait over 3 months for another first team game when poor form and a 6-1 defeat at Burnley on Boxing Day did force Matt’s hand. Just before Christmas, Best had scored 3 for the Youth Team in a 14-1 defeat of Barrow. In the return game against Burnley on 28 December United hammered the Turf Moor men 5-1. George Best had arrived.

He stayed in the first team helping United to finish runners-up in the league, the semi-final of the FA Cup and the quarter-final of the European Cupwinners’ Cup. I would have only caught glimpses on the TV highlights had Bestie not carried on playing in the successful FA Youth Cup run that winter. He lit up some cold evenings with raw talent as he led United to their first victory in that competition since the Munich Air Crash and our last for 28 years. In the semi-final victory over City (8-4) and Swindon in the final (5-2) he danced round the field and bemused the opposition with his trickery, passing and will to win.

Over the next four years George Best rose to become the best player in England, in Europe and arguably the world. Despite the millions of words written since about his lifestyle, it was his football alone that made him so special. You hear people refer back to old players and say ‘he had everything’. Well George really did. He possessed all the basic necessities – speed, stamina, two great feet; he could head, pass, shoot, dribble, make goals and score them. But what separated him from the rest was his incredible ball control and his ability to flat-foot opponents with just a wiggle of his hips, a dummy shot or stopping dead in his tracks. Bestie never stopped running so all this skill was executed at break-neck speed, he’d twist defenders inside and out. Yet, here was no prima donna, if the ball was lost going forward he’d chase back, dispossess the opposition and within seconds be hurtling forward for another attack.

Perhaps another quality that put our George on a pedestal was his bravery. The second half of the ‘60s was notorious for some very hard defenders. Every team had one and believe me they got away with murder compared to football in the 21st century. The likes of Ron Harris, Tommy Smith, Norman Hunter, Peter Storey, Mike Doyle, Billy Bonds made Reservoir Dogs look like a night out with Alan Carr. They callously hunted down the skilful ball players and the referees offered little protection then. George’s speed and acute balance made it almost impossible to floor him, but if they succeeded he just got up and went at them again, time after time. The greatest goal I saw him score captured everything about his genius. We played Chelsea in the league cup at a rain-soaked and misty Old Trafford on 28 October 1970. This turned out to be a great game with an atmosphere to match. United played like the glory nights of the late 60’s with a forward line of Aston, Best, Charlton, Kidd and Law rolling back the years. United won 2-1 with George Best scoring the winner by waltzing though the mud and the Chelsea defence from the half way line. On his way he withstood the crudest of scything tackles from ‘Chopper’ Harris before rounding Bonetti, planting the ball in the net and sinking to his knees, arms aloft right in front of a captivated and adoring Stretford End.

George Best thrilled Old Trafford and countless away grounds with his God-given talent and we all loved him. The girls adored him for his skill, his looks and a cute shyness despite his fame. The guys loved him because he was a football genius and because he was adored by women! Between 64-68 George won two league titles, the European Cup, the English Footballer of the Year and European Footballer of the Year. He didn’t do it single-handed, he was part of a golden United side, but he was our talisman. He destroyed Benfica in Lisbon in ’66. They had appeared in four of the previous five European Cup Finals and United won 5-1with George leaving them for dead in the first 15 minutes.

His team mates respected his genius and so did his peers. Beckenbauer, Pele, Eusebio, Cruyff all ‘doffed their cap’ to his ability. In my view his finest hour was the 1968 European Cup Final at Wembley against Benfica again. The great Portuguese side were reduced to persistent fouls in an attempt to suppress the Irishmen but he kept coming back for more and eventually his skill and persistence won the day.

The combination of his football talent, his lifestyle, his earnings made him symbolic of his age in a way no single player did before or has done since. George Best was the first football superstar, the Fifth Beatle. He had a record made about him, The Belfast Boy by Don Fardon, he had a manager to run his business affairs, he owned a couple of night clubs in Manchester and at least two boutiques. George Best’s face adorned products from Eggs to Chewing Gum, his girlfriends included Miss Worlds and he was invited to No. 10 Downing Street 26 years before Britpop came along.

The downward spiral that followed ’68 has been well documented and provides little nourishment for the soul. Better to spend half an hour or so with a pint or a cuppa and relive his finest moments on YouTube. Towards the end of George’s life he confided in Denis Law, telling the Scot that he hopes people will remember him for the football. We do George and we always will.