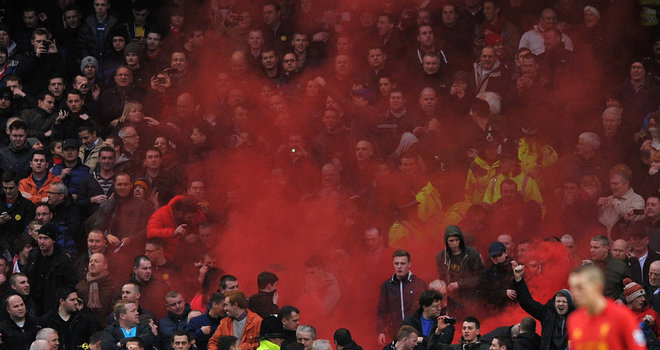 “The Football Association has contacted Manchester United and Liverpool to seek their observations into the incidents with flares during the Capital One Cup tie. The FA, Premier League and Football League are currently working together on the issue of flares, in conjunction with the Fire Service and St John Ambulance, in an effort to alert supporters to the potential dangers.” – FA spokesman.

On a further, the Premier League released a statement which read: “Flares are extremely dangerous. They burn at close to 2,000 degrees and we have been made aware of several incidents where fans have sustained injuries by igniting them. They also generate such large quantities of smoke that they negatively impact on people’s enjoyment of the game and can cause panic and breathing difficulties for fans sat close to them. We will be stepping up our work with supporter groups to help fans understand the dangers involved with flares and encourage the minority who are putting others at risk to stop using them.”

Stay classy, Liverpool. Outraged by everything, ashamed of nothing.