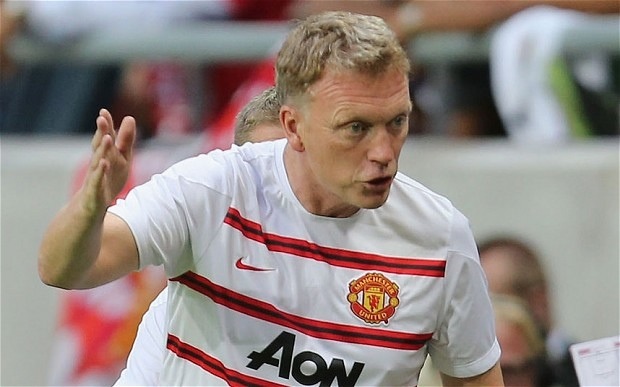 No-one ever said that replacing the greatest manager to have ever lived was going to be a breeze and a cakewalk. Quite the opposite. How do you replace Sir Alex Ferguson? The man entrusted with replacing the managerial godfather was David Moyes, who received a ringing endorsement from Ferguson himself, the ultimate compliment.

It has been quite a transition from taking charge at Preston and then continuously exceeding expectations with Everton. It’s not an exaggeration to suggest that the football world rejoiced and sensed a glorious opportunity once Ferguson stopped pointing at his watch and chewing his gum for good. The sharks have been circling from each and every angle possible.

Moyes’ introduction to life in the United hot seat could not have been as testing. Wayne Rooney, seemingly disillusioned and approaching the exit door, had to be reassured and reintegrated back into favour after Ferguson’s stunning claim that Rooney had once again sought to sever his ties with United and seek a fresh challenge.

Rooney looked for all money as if he was a goner, particularly given the acrimonious end to his Everton career, forcing a transfer virtually stabbing Moyes in the back and the furore centering around revelations in Rooney’s autobiography. So for Moyes to turn his head despite the obvious, typically deceitful Mourinho tactics of publicly tapping up was seen as a huge tick in the box. One of the huge worries from our perspective was seeing Rooney destroying defences, potentially ours, with a renewed hunger and desire, something which we have been profiting from and long may it continue. Moyes has challenged Rooney to make history with United, the opportunity for him to become a legend is right in front of him. Having now scored 201 goals and counting, this rejuvenated Rooney is enjoying his football and looks as committed as ever. Regardless that he may or may not have wanted out again, everyone now is right behind him and that saga is seemingly water under the bridge with Rooney flourishing and being our standout performer in the opening two months of the season.

Our transfer ‘policy’ has been much discussed and ridiculed over recent weeks, and rightly so. It was nothing short of a complete shambles. If the manager was so keen on signing Fellaini and Baines, why not get it done almost as soon as he stepped foot through the doors? That way they could have had pre-season to acclimatise to their new colleagues and get used to the United way of things. Instead, the mad scramble at the end for just Fellaini made us look desperate and hence why we overpaid by £4M compared to his longstanding buyout clause. Moyes must surely have been aware that such a clause existed, having to fend off interest in the Belgian virtually every summer at Everton. It can be inferred from this that Moyes thought the Everton duo were ‘easy’ targets and could obtain them at any given time, they were almost like an after-thought and a safety net if other targets could not be signed. The less said about our pursuits about Fabregas, Thiago and Ander Herrera the better really. It was blatantly a change of tact for Moyes to be so open about our perceived targets, this was not the norm for a club like ours, and that possibly led to our hideous downfall in the market. The deadline day antics surrounding Bilbao’s Herrera should never have been associated with our club, Whether the impostor claims from Spain proved to be bogus or not, it was simply embarrassing. Some harsh lessons have been learnt (hopefully). The said ‘policy’ has undermined Moyes somewhat, and hopefully in the future we will have a more concise strategy which will lead to us actually getting our number one targets.

Onto the football aspect, Moyes could not have got off to a much better start than the 4-1 victory at Swansea, a notoriously tricky venue. He went for the players with experience and nous- he was always going to play it safe in these opening fixtures given their difficulty. This was emphasised with the selection of Giggs, Ferdinand and Vidic. With the United fans in full voice singing ‘Play like Fergie’s boys’, Moyes did just that, we had a cutting edge and were clinical in front of goal. Yes, I did just refer to Danny Welbeck and clinical. This was followed by a dour 0-0 against Chelsea, which was no fault of our own. At least we didn’t have the intention to just ‘park the bus’.

September has so far seen us play nigh-on abysmally at Anfield against a very average Liverpool side on the day, dispose of Crystal Palace at Old Trafford and then sweep aside Leverkusen in some style before that derby result.

There have been some key talking points from September. Firstly, the shock news that mercurial winger Nani had first of all extended his contract, but by a whopping five years. Yes, five. He has long been the fans’ go-to scapegoat when things are not A-OK, no-one can doubt his ability, just his consistency. Should Nani still have that consistency burden on his shoulders after 6 years at United? Probably not. It could prove to be a master-stroke from Moyes, especially if he gives Nani the confidence to perform at the levels we all know he is capable of. I sensed that Fergie wasn’t the sort to regularly put his arm around his shoulders. If that is the way Moyes is going, let’s get behind it, because the results could be devastating. Yes, Nani is a passenger when he isn’t at the races, but when he is he is virtually unplayable.

Another tick in the Moyes box has been the blooding of Adnan Januzaj in and around the first-team. He made a barnstorming debut in a brief cameo against Palace and looked right at home in front of 75,000 urging him on. Having seen a lot of Adnan’s development since last year, he is the real deal and easily our best youth product currently. He seems like a level-headed being with a will to succeed at United, something that cannot be said of some of our previous talents. The one sticking point is his contract situation. With it expiring at the end of the season, Europe’s elite are sniffing for a bargain. It’s important that Januzaj does not fall in a similar fashion to Morrison, Pogba and Fryers in seeking pastures new too soon. We need to stop this unnerving trend of youngsters going through the exit door before it becomes a incurable epidemic. Januzaj is not the sort of character to angle for a move, this might change though if we do not act sharply and get the boy tied down. He is a superstar in the making and if we deprive him of the first-team action he should now be getting, we will lose an unreal talent. He leapfrogged Ashley Young within one 20 minute showing yet it was Adnan sitting in the stands at the weekend. If we lose this gem, questions will have to be asked of the strategy the club is taking. My message is get the lad in the team and get him tied down.

Which brings me onto Wilf Zaha. He was hugely impressive, alongside Adnan, in pre-season and then the Community Shield, so what has happened since? Is his attitude not right? Has he not been training hard enough? He is another with untold promise yet thus far deprived of opportunities. Part of my thinking is that now the hard set of fixtures is away, now will be the time for Moyes to experiment and test out the players, starting with tomorrow’s Capital One cup tie against the Scouse. Zaha will hope to see some more action in the coming weeks, but his case has been a curious one.

Speaking of curious, Shinji Kagawa’s omission is that exactly. We now know that he was not fully fit at the start of the season, so we can give the management some slack for that. For me, it was no coincidence that once Kagawa started (against Leverkusen) we looked more purposeful in attack and that was rewarded with 4 goals. Kagawa adds that guile and creativity that fans love and we need badly (Liverpool and City away being the perfect examples). In similar circumstances to Zaha, Kagawa can hopefully be unleashed against the so-called ‘easier’ opponents coming up.

The final talking point has been the ever-present centre-back pairing of Vidic and Ferdinand. They are still our two best defenders, yet for them to play 3 games in a week was absolutely flabbergasting. When I saw the Leverkusen team-sheet, I was amazed to see those two in the heart of our defence, with the important derby just days later. These two are obviously not in their prime of 2008 where they could play every week no problem. The challenge on all fronts is too demanding on their bodies to play 3 games per week. This was highlighted last year when Vidic played against Galatasaray and then missed the game at Anfield after suffering a recurrence to his previous injury. We were found wanting by City’s freshness in attack, hindsight is a wonderful thing, but surely it would have made more sense from a basic sports science perspective that Jonny Evans played against Leverkusen to ease the load on those two?

I digress, the first few months have been mixed for Moyes. People calling for his head after just 5 games need a long hard look at themselves, it took Fergie a few years to collect his first silverware, people seem to have short memories and forgot that Fergie’s final rousing speech against Swansea was to tell the fans to back the new man.

That I will be doing unconditionally. Every rollercoaster has bumps along the way. The derby hammering could be the best thing that happens to Moyes, much like the 5-1 derby in ’89 did to Fergie. It will hopefully spark us into life and we’ll go on a run now. United have always responded when the chips are down, hopefully this 2013-14 crop will be no different now the baptism of fire is finally over.