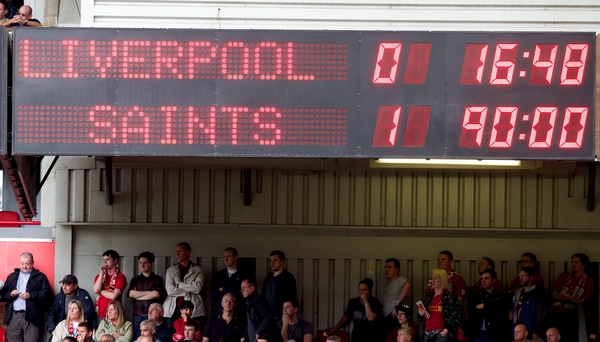 A confident team in full flow can be a joy to watch; searching passing, ambitious dribbles and audacious finishing are all marvelous and always features in great sides. However, it is a manager’s job to manage this confidence. To use the old cliché, there are no easy games in football and this is even more the case in the Premier League; notoriously one of the most competitive league’s in the world. Confidence can quickly develop into arrogance if a manager is not watchful of his team’s mood, desire and application, and at this level as we have seen time and time again, one underestimates their opponent at their own peril. There were at least two great examples this weekend of teams becoming undone by their own arrogance as both Liverpool and Newcastle United slumped to surprise defeats.

There is no denying it, Liverpool have been marvelous at times this season. Defensive solidarity has been coupled with drive in midfield, whilst up front the near telepathic relationship between Daniel Sturridge and Coutinho picked up from last term to lethal effect. Setting the pace in the title challenge seems to have gotten to their heads however; something manager Brendan Rodgers had either failed to spot or was unable to deal with, as Liverpool ignored the warning signs against Swansea. Liverpool’s blushes at the Liberty Stadium were only spared thanks to the disastrous mistakes made by their former midfielder Jonjo Shelvey, who twice assisted Liverpool goals. The Anfeild side were lacklustre against the Swans, but once again against Southampton this weekend seemed to approach the home game with an arrogance that they were certain to win. Despite, the Saints less than stellar start to the season, Liverpool should know that even away from home Southampton are a formidable side, always capable of grabbing a goal, something they did just after half time. Southampton’s goal came after a terrible few minutes for Daniel Agger, who first sloppily gave away possession, allowing Adam Lallana in to force a corner from Simon Mignolet. From that corner, Agger again showed complacency; outmuscled, he allowed Dejan Lovren in front of him and the Croat headed home.

Complacency and arrogance are not the attributes of a Champions League club, and if Liverpool are to return to the European promise land, Brendan Rodgers will have to stamp out these traits. Although of course clubs will always drop points, to do so because of arrogance or sloppiness should not be tolerated by managers or fans. One particularly disgruntled group of fans is the Toon Army. Already angry at how little transfer activity had occurred this summer following the appointment of buffoon Joe Kinnear, Newcastle fans ire continued to increase as United started the new term with a thumping by Manchester City and a toothless draw to West Ham United. However, in recent weeks, the Newcastle side has improved, the obvious quality in the United side began to shine through and Pardew’s side recorded wins against Fulham at home and Aston Villa away, with Ben Arfa in particular standing out. After underperforming for so long, Newcastle’s international stars were finally starting to gel; loan signing Remy was showing his class and the likes of Debuchy, Cabaye, Sissoko and Gouffran were playing with growing confidence.

Newcastle went into their game against Hull this weekend understandably expecting a win, but quite where the arrogant assuredness that a win was guaranteed came from is unclear; having had a disastrous season last time out and only just starting to improve, Newcastle should be approaching every game with a determination to battle for every point. Instead Newcastle approached the Hull game as a walkover against a newly promoted side, a complacency that was exasperated as Remy gave United an early lead. Complacency and sloppiness undid all of United’s good work, when after twenty minutes, following a brilliant save by Tim Krul from a Danny Graham effort, Newcastle’s defence found themselves out of position and failed to clear their lines allowing the brilliant Aluko to assist the equally impressive Robbie Brady. Hull continued to threaten through Livermore and Graham, but despite going ahead through another Remy goal, Newcastle failed to lean their lesson and again were drawn level through defensive sloppiness. After Venon Anita conceded a freekick, the Newcastle defence completely failed to pick up the run of Egyptian Elmohamady who nodded home Brady’s delivery. After being ahead twice in the game, at home, against a newly promoted side, Newcastle finished the game as 2-3 losers; Sony Aluko found himself unmarked at the edge of the box and showed exquisite skill to volley home a George Boyd cross. Pardew will want to avoid another relegation battle and the fans will demand improvement and whilst losses are bound to occur over a season, the manner of this defeat is bound to frustrate, with Newcastle the authors of their own downfall.

Elsewhere, Manchester City laid down the first real statement of intent in the title race as they thumped local rivals and current Premier League Champions Manchester United 4-1. It was a first Manchester derby for both Moyes and Pellegrini and it was the Chilean who was able to steer his team to victory and continue a remarkable record of five matches unbeaten against Manchester United, conceding only one goal. Without talismanic striker Robin van Persie due to an apparent groin injury, it was Wayne Rooney who once again found himself the lone shining light in an underperforming Manchester United side. However, whilst the Manchester title contenders were battling it out, it was two London clubs who top the table after five games, with Arsenal edging Tottenham out narrowly on goal difference. At the other end of the table, outspoken Italian Paulo Di Canio has been sacked, with his former club Sunderland rock bottom after their raft of summer signings have failed to gel. Although only five games into the season, this early sacking shows just how little room for error there is in the Premier League, with the final nail in the former West Ham and Lazio star’s coffin possibly being the performance of Stéphane Sessègnon this weekend. The Benin international was sold by Di Canio amid accusations over the attacker’s commitment and application, but Sessègnon put in all action display for his new club this weekend and scored for West Brom in the 2-0 win over Sunderland that may have ultimately cost Di Canio his job.