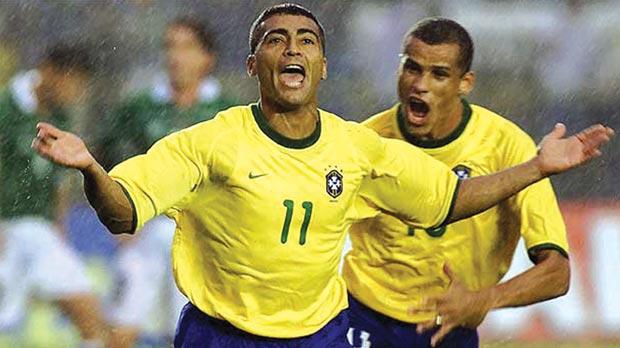 When we’re not bemoaning the state of the England team or following our domestic club sides there are many of us who take in games from abroad. Then there’s European competition and major international tournaments when global talents can easily be seen. Although English football has been blessed with more than its fair share of astounding and accomplished players there are some who never plied their trade over here. This is a line-up of individuals who hung up their boots without ever representing an English club and as it is a relatively modern selection the rule is that they had to still be playing in the 90s to be eligible. Besides the obvious ones of Figo, Zidane and Ronaldo here are the players who could have surely won major honours, entertained and captured affections had they ever graced our game.

An extremely solid choice would have been former Bayern Munich and Germany keeper Oliver Kahn but there is certainly room for entertainers in this team, even in goal. Campos won 130 caps and played in a number of international tournaments but that doesn’t tell the full story with him. The ex-Pumas and LA Galaxy stopper also played up front on occasions and his brightly-coloured kits that he designed himself drew plenty of further attention. Whether they’d make it past the Premier League and other rules though is another matter.

Most people would instantly name Cafu as the best right-back in modern times but he had to wait his turn to establish himself as Brazil’s number 2. In the 1994 World Cup final he replaced the injured Jorginho, a player who knew a thing or two about attacking with purpose. Besides representing his country 64 times, Jorginho spent six years in Germany with Bayer Leverkusen and Bayern Munich, winning the Bundesliga with Bayern in 1994.

Although he had played in midfield there were not many more formidable defensive opponents than Sammer in his heyday and he was a Champions League winner with Dortmund in 1997. Although Manchester United fans did not get to see him in the semi-final games against them that year he was at the heart of the backline as Juventus were beaten 3-1 in the final. Sammer, who was world-class in the sweeper role, scored at Old Trafford twice for Germany in Euro 96, against Russia in the group phase and as he grabbed the winner in the quarter-final against Croatia.

The name of Koeman might not sit too well with England fans who remember him from the crucial World Cup qualifier in 1994. After dragging down David Platt when through on goal he somehow only received a booking before going on to score in a 2-0 win that was ultimately decisive in ending England’s qualification hopes and Graham Taylor’s reign. Koeman reached double figures for goals in each of his six seasons with Barcelona, winning the European Cup in 1992 (as he had with PSV) with his extra-time free-kick at Wembley to see off Sampdoria.

Roberto Carlos may have redefined the modern full-back and Paolo Maldini may be a terrific choice but another first-class left-back never to join an English team was Lizarazu. He was first-choice as France won both the 1998 World Cup and Euro 2000 and although he was not involved for Bayern Munich in the 1999 Champions League final defeat he did score in the shootout against Valencia as they triumphed in 2001.

Every midfield needs that spark of creativity to turn a game and Romanian great Hagi had that something extra. Playing in three World Cups and three European Championships with his country, Hagi also spent two years each with Real Madrid and Barcelona. A hero with Galatasaray, he scored a memorable goal in the 1994 World Cup as he flighted a stunning effort from around 40 yards over Colombian keeper Oscar Cordoba and he was part of the 1998 side who all famously dyed their hair blonde during the tournament.

With the solidity of Sammer and Koeman in defence, opposing players will have some problems trying to break through with the added presence of Matthäus in front. The German holds the record for World Cup appearances by an outfield player with 25, featuring in 1982, 1986, 1990, 1994 and 1998. The former Inter and Bayern man won a magnificent 150 caps and was also named European Footballer of the Year in 1990 after captaining the Germans to the World Cup that year.

The likes of Rui Costa and Luis Enrique enter the thoughts when trying to come up with midfielders English teams missed out on but a chance to bring Valderrama to England, even in fantasy, cannot be passed up. There is obviously no denying how much his outrageous blond afro / perm / supernatural phenomenon of a hairstyle contributed to his popularity but he was an extremely talented player in a golden era for Colombian football. ‘El Pibe’ also recently died his famous hair pink for breast cancer awareness.

Even with Dimitar Berbatov’s exploits in English football in recent years there is still no matching Stoichkov when it comes to Bulgarian footballing idols. Aside from CSKA Sofia in his homeland, Barcelona got the best of his magical left foot at club level and together with Romário he tormented Manchester United one evening in November 1994. With over 114,000 in the Camp Nou, Stoichkov scored two and Romário and future Chelsea full-back Albert Ferrer added the others as the Reds, playing in black, were given a Champions League schooling.

It is hard to think of Baggio without picturing that penalty sailing over the bar to hand Brazil the 94 World Cup but he was a truly remarkable talent. The World Player of the Year in 1993, Baggio was prolific at international level scoring 27 in 56 games for Italy and in three separate World Cup tournaments. His 205 goals in Serie A for the likes of Juventus, Fiorentina and AC Milan mean he is 6th in the league’s all-time leading scorers.

Completing this irresistible forward line is the man mentioned earlier alongside his ex-Barca colleague Stoichkov. Modern Brazilian attacking stars are easy to come up with, from Ronaldo to Neymar, but football lovers worldwide still get nostalgic about Romário. The actual number of goals he registered in his career is open to some mystery but according to an article from FIFA he passed 1000 in May 2007. He was named World Player of the Year in 1994 after lifting the World Cup in the USA and he can count one La Liga crown and three Eredivisie titles amongst his honours from his time in Europe.

www.Togasports.co.uk has provided a detailed insight into the greatest eleven football players that never blessed the English league.

6 responses to “A great eleven English football never had”