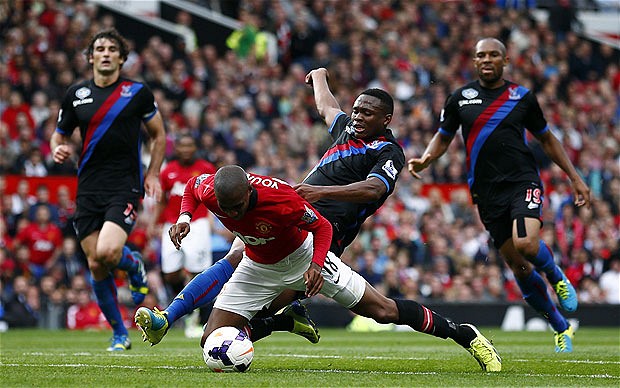 Answer me this – how do you rate Ashley Young? The former Aston Villa midfielder was astonishing alongside Gabriel Agbonlahor with both speedsters tearing apart defences. Now, since arriving at Old Trafford in 2011, he’s been plagued with injury after injury which has inhibited his football.

With Antonio Valencia, Shinji Kagawa, and now Wilfried Zaha all in the mix, questions seem to arise whether or not he fits in at all. And when all is said and done add Ryan Giggs, Adnan Januzaj and Nani to the long list of potential wingers for United. With the plethora of young and established talent, better performances must come the 28-year-olds way, and fast.

There is no question regarding Young’s talent. Whether or not he will fit into the plans with David Moyes remains to be seen, and the Englishman has spoken out about the newly acquired youngster, Zaha. Young told MUTV:

“He’s going to be a fantastic player. We wouldn’t have signed him if he wasn’t going to have a great future and he’ll have the experience of listening to the older, experienced players talk.”

Zaha offers plenty of raw talent along the right-flank but, at the current moment Young rates a bit higher. Certainly, Young does not offer the same dynamic as most of our wingers but when he’s on point his service is superb. Seemingly, Young rates the challenge between he and Zaha as a healthy one – for now. In due time, expect Zaha to have a beautiful string of performances under Moyes, and with the supporters especially taking a keen liking to the former Crystal Palace winger – that could be all she wrote for Ashley Young.

For now, the writing is not on the wall. If Nani can put together a full season I’d expect for the Portuguese international to cement his name onto the team sheet. Again as for Young, simply put he needs to deliver. Although we’d like to think the best is yet to come from the former Aston Villa man, time is ticking.

In regards to the aforementioned Nani subject, we cannot have Young be this seasons scapegoat either. A brilliant player with pace and skill alike, was always selected in big matches against City, Arsenal, and Chelsea. In many ways, Young is our new Park Ji Sung. Again we stress the fact that he is no Ronaldo but instead offers an even better approach to United’s preferential wing play in the past seasons.

Young is direct. He is concise with his passing and upon receiving the ball immediately looks forward. As this bit of directness can equally be as frustrating as it is good, Moyes must work in a system to accommodate wing-play. Michael Carrick pings the ball throughout the pitch and wisely addresses every attackers needs with telling balls.

Despite numerous praise Ferguson has given Young, questions arise whether Moyes will do the same. I’ve heard recently that Young “is not a United player” and their reasonings may not be all that far-fetched. Give the lad time – not too much, but just enough to see him for the true type of player he is.