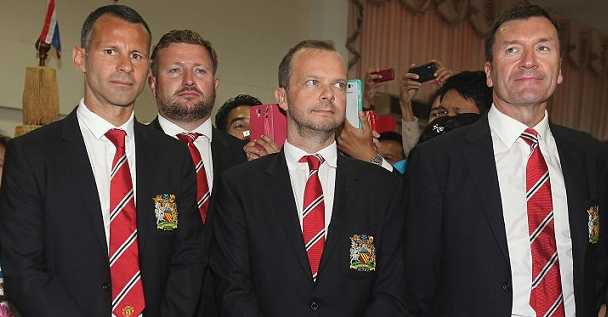 Manchester United have written to fans regarding their business in the recent transfer window. The club insist they will not be drawn into a panic or frenzy.

“The club had two main priorities for the transfer window. The first was to keep Wayne Rooney. He is a world-class player and the manager is very keen to have Wayne as a key part of the club’s drive to retain the Premier League trophy. That aim was fulfilled.

“The second priority was to add a midfield player, and the capture of Fellaini has met that need.

“Add to that the fact that Wilfried Zaha is a new signing and that the manager has added the highly-rated young player Adnan Janazaj to the squad and the team does in fact have a different feel to it than the one that finished last season.

“The club has invested over £40m acquiring new players this summer, as well as re-signing Nani on a long term deal – more than it has traditionally spent on transfers.

“Additional resources were there to add to that but it was not possible to agree with other clubs for the right players to leave. The key point there is that the players we buy have to be the right ones for Manchester United; not just any player.

“The club has always backed the manager in the transfer market, as Sir Alex has said on many occasions and it will continue to do so. The club has demonstrated its belief in, and commitment to, David Moyes through the award of a six year contract.

“Allowing him to shape the future Manchester United team is a long term project not an eight-week panic. He must be given time to assess his new squad and come to his own decisions on which players he feels will strengthen it.”