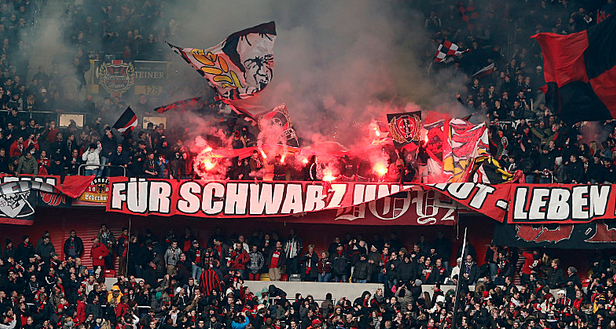 Cristian Nyari, editor-in-chief at the Bundesliga Fanatic, has taken some time to show off his expertise on the Bundesliga, his thoughts on Sami Hyypiä as manager of Bayer Leverkusen and much more. Follow the Nyari on Twitter.

United fans are familiar with the name Sami Hyypiä, who spent 10 years in England with Liverpool. He became manager of Bayer Leverkusen in 2012. What are your thoughts on his managerial career so far?

Overall he has exceeded all expectations. He took to the league right away after he retired and impressed the board enough to give him full control of the team last year. And in his first full season in charge he led Leverkusen to a Champions League spot and was the only team in the league to beat Bayern Munich. All the while, he has the team playing as consistently as they have in a long time and is getting the best out of key players. Tactically he has overhauled the team and turned them from a relatively innocuous side to one of the most difficult to play. This season they picked up where they left off and are right up there competing with Bayern and Dortmund.

Leverkusen’s nickname is Werkself (Factory Squad). Where does this come from?

The team’s roots are based in industry, namely pharmaceutical company Bayer which is what “Werkself” alludes to. The nickname is also a means to emphasise those blue collar origins amidst public perceptions that the team is an anomaly in the corporate and owner-free football culture in Germany.

With the state of club ownership and ticket prices in the Premier League, fans dream about having their own club run in that manner. You also have people that say the bigger clubs cannot afford to be fan owned anymore but Bayern Munich can do it… Can you ever see this model being scrapped from German football?

Never. Not in my lifetime anyways. The football culture in Germany would have to fundamentally change. Keep in mind, the Bundesliga only went fully professional in the 1960’s, far later than the other top leagues and that was under severe scrutiny and protest. Professionalism was taboo for a long time and it took decades for it to be embraced in Germany and corporate ownership, or influence, is seen as the antithesis of all that makes German football so fan-friendly. Clubs would rather compete on their own terms and would never do anything to threaten supporter access to their team. It would also have to overcome tough political obstacles in the governing bodies.

Which players should we look out for?

Stefan Kiessling is the obvious one. He is without a doubt Germany’s best striker at the moment, has scored 15 goals in his last 15 league games and was top scorer last season. He is playing the best football of his career and the way the entire team is set up optimizes his effect. Others are Sidney Sam and Heung-Min Son. Both are exceptionally quick and essential to Leverkusen’s trademark counter attacking game. They are also excellent long range shooters. Finally, Lars Bender if he’s fit to play. He is the engine of the team and connects defense and attack and never slows down in a game.

The Bundesliga is well up there with the best league in the world. Munich featuring in the last two Champions League finals and winning one certainly suggests that. And the way Borussia Dortmund play football is a bonus. What is the perceived view of the Premier League in Germany?

Unfortunately the perception is not as positive. It is difficult to not look at anything other than the inflated transfer prices or opulent corporate influence. Add to that the extremely high ticket prices and the lack of investment or presence of local talent/development and it’s in direct contrast to the football landscape in Germany. The league is still highly respected and viewed and the top sides are still considered some of the best in the world but it’s not looked at as any kind of model anymore.

We lost out on Thiago Alcantara during the summer. What sort of reception has he received in Munich? Is he seen as Pep Guardiola’s pet or an asset by the fans and players?

It remains to be seen. Unfortunately he suffered a quite serious injury early in the season and won’t play until the end of the year. At first he was seen as a threat to local hero Bastian Schweinsteiger because he occupied his position in pre-season when Schweinstieger was injured but that quickly dissipated. That said, Thiago adapted to the team really quickly and all the players have embraced him so far. A lot of how he will be perceived is how Guardiola is perceived as well and so far the players have had nothing but positive things to say about him and his methods, albeit they take a bit of time to implement and transmit.

Dortmund have bought and sold players during the summer. Are they as strong as before?

From Klopp’s very own words, they’re possibly even stronger. They’ve won their first five games (never done before in club history), have the best attack in the league and the second best defense. Götze’s departure is a distant memory and all signs point to yet another successful campaign. One of the things Klopp has done better than anyone is maintain the team’s motivation despite key players leaving and this summer appears to be no different.

A big yay, although having seen him play the day he set foot in Europe, it’s disappointing to see him on the bench in England, a sentiment even Klopp expressed recently. Although I do understand how he conflicts with Rooney and United’s usual tactical approach. It begs the question then, why did Ferguson bring him in?  Surely not to change him as a player?

I admired what he did at Everton and I fully believe he can do a good job at United. He did walk into an almost impossible situation though having to replace Ferguson. It’s just a matter of how patient everyone is with him and how much support he can get to make his team his own. I’m firmly against impulsive thinking and believe every coach, player, etc. deserves their time and I think Moyes needs at least two seasons to really put a stamp on this team.