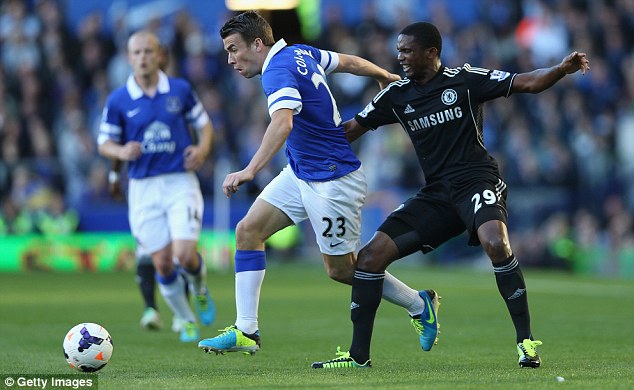 It was a very busy summer for Chelsea. It all started with the return of the Special One; Mourinho was back and with him he brought a transfer storm. A host of attacking players were linked with Chelsea, most notably Wayne Rooney who elected to stay at ManchesterUnited and Edinson Cavani who opted for big-spending Paris Saint-Germain, before the London did bring in a player, but André Schürrle arrived and was the first of many. Marco van Ginkel was signed in midfield, whilst Chelsea’s attacking options were bolstered further by the signing of Willian; poached from under the noses of Tottenham presumably just so Mourinho could wind up his former protégé Villas Boas, as attacking midfield certainly isn’t a position that Chelsea needed to strengthen. For all of this activity however, the most intriguing of Chelsea’s signings this summer was a free acquisition; no, not Mark Schwarzer, the other one. Samuel Eto’o followed Willian as part of the exodus that occurred at cost cutting Anzhi Makhachkala this summer. Majestic, masterful, mercurial, the King of African football was back in the big leagues following his Dagestan adventure and arrived in London with a big reputation; both for goal scoring and troublemaking.

Striker has been an area of concern for Chelsea ever since Didier Drogba and Anelka departed for their ill-fated Chinese misadventures; Daniel Sturridge was never utilised properly, Fernando Torres has largely been an expensive flop despite flattering to deceive at times, and Demba Ba just hasn’t quite hit the form that earned him his move from Newcastle United. Chelsea fans would have been no doubt delighted with the addition of Eto’o and his record of 288 goals in 544 club games. Neither is Eto’o a one trick pony, but a versatile and dangerous player who as well as a predator in the box, has been used often adapted to being deployed on the wing or as a second striker with remarkable ease, something Mourinho know very well from his time at Inter Milan. This versatility has seen Eto’o be somewhat of a creative force, racking up 71 assists during his time at Barcelona, Inter Milan and Anzhi, to go along with his undoubted goal scoring pedigree which has also see score just under a goal every other game for the Cameroonian side of which he is the all-time top goal scorer, third most capped player and the current squad’s only centurion. Put simply, Samuel Eto’o is a big deal, and with the return of loan star Romelu Lukaku meaning there were four strikers competing for one spot in the Chelsea starting XI, it became apparent that one of these four (Torres and Ba the other two) may well be leaving.

What may have surprised Chelsea fans and football fans in general was that Lukaku was the man who left. Having been so impressive last term for West Brom, scoring 17 goals in 38 appearances, it was expected by most that the young Belgian would be a key figure for Chelsea this season. Instead, Lukaku found himself shipped out on deadline day to Roberto Martinez’ Everton in a move that both shocked and concerned fans. Lukaku had a better strike rate in all competitions than either Torres or Demba Ba last term and also scored more league goals than Torres, Ba and Eto’o. With Atlético Madrid reportedly ready to bid for their old icon Torres and Arsenal sniffing around Ba, it seems odd that Mourinho would choose to send out Lukaku; he has already proven that he can make a contribution at this level and at 20 years old is the future for Chelsea; Ba, Torres and Eto’o whilst all talented players are not. It is not the first time that Chelsea have pandered to Torres at the expense of youth, with Sturridge in particular neglected in favour of giving more opportunities to the expensive flop. With the club Lukaku was loaned to, Everton, Chelsea’s first opponents after deadline day, the pressure was on for Mourinho to prove that he made the right decision in letting the Belgian go and that Chelsea could score goals without him, with Eto’o set to make his first start.

Within minutes of kick off, the Cameroonian international showed his class of movement, getting free of the Everton defence to latch onto a sumptuous cross by Ramires, who was excellent all game. Eto’o’s headed effort was tame however and was indicative of how Chelsea’s afternoon would continue with Mourinho’s side continuing to probe and fashion chances, their play only missing that final pass and finish. However, Chelsea profligacy should not be used to detract from Everton’s performance, with Everton battling fantastically in the midfield, with Gareth Barry in particular excellent on his debut, with the highlight of his performance a perfectly timed last-ditch tackle on Samuel Eto’o who looked set to score. Although Barry’s stop was highly impressive, Eto’o might have had more success with what was the best chance of the game for Chelsea if fellow new signing André Schürrle had provided a better weighted pass to capitalise on Tim Howard’s mistake. None of Chelsea’s usually fluid creative players shone against the Toffies, Hazard was perhaps the best of the bunch, but Schürrle in particular was wasteful and most of Chelsea’s verve and drive came from either the impressive Ramires or from David Luiz carrying the ball out of defence.

The game was not all Chelsea however; Everton had their own chances and stuck what turned out to be the winner just before half time, with some clever footwork from Ross Barkley, allowing Osman to dig out a cross, flicked on by Jelavic and converted by former Rangers attacker Naismith. Ross Barkley was not a constant threat against Chelsea, but the young Englishman grew into the game, drawing a foul later in the game with Leighton Baines hitting the bar from the resultant free kick. Barkley has been excellent so far this season, overcoming injuries to get plenty of opportunities under new manager Roberto Martinez who is happier to take a risk on youth than his more conservative predecessor David Moyes. Barkley is only one of many English players shining in the Premier League so far this season, with Ward-Prowse and Shaw from Southampton as well as Redmond at Norwich all worthy of special mention. These players are joined by a host of young talent at clubs throughout England’s top two tiers, proving that Greg Dyke’s assertion that foreign imports are to blame for England’s international failures is overly simplistic.

Elsewhere, Gareth Bale began the titanic task of repaying Real Madrid for his colossal £85 million fee by scoring on his debut in Madrid’s 2-2 draw with Villareal. Never to be outdone, Cristiano Ronaldo proved he is still the main man at the Estadio Santiago Bernabéu by matching Bale’s scoring feat.