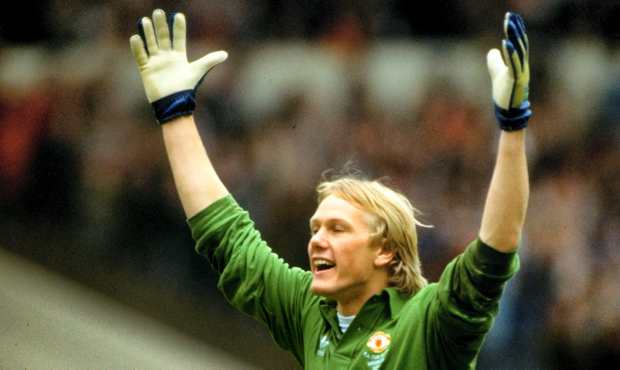 Gary Bailey. Talk about bad timing. Being the fifth choice goalkeeper during the early stages of his Manchester United career did not allow him to develop into a first team regular. Growing up in South Africa during the time of the apartheid, Bailey came from a well-off family which seemed to put him on a different level when he finally made it to Old Trafford.

Bailey was a red from 1978-1987 and made almost 300 appearances during his time in the Football League. In South Africa he was seen as preppy, rich and entitled; however, he was anything but. Upon his entrance into the historic grounds of Manchester United which he paid for on his own to undergo a trail with United, he remained quiet and hoped to secure regular first team football.

Those lofty ambitions were a bit too hopeful, and Bailey was forced to feature more of a fourth or fifth string goalkeeper rather than United’s number one. The transition to the English game was never going to be easy for the keeper. Imagine the weather in South Africa compared to the cold, raining -4 degree evenings in Manchester. Quite a difference, but despite nearly calling it quits, Bailey continued onwards.

Capped twice by England, it’s iconic that his career would come to a halt after a serious injury while with the national squad. Despite his immense work ethic and ambition to reach the first team as a regular, once he reached his goal, it was not all butterflies and rainbows. To this day if Gary Bailey’s name is mentioned, some may immediately think of the 1979 FA Cup Final in which he made a serious blunder. Bailey was unable to keep hold of the cross which then allowed Alan Sunderland to score the winning goal for Arsenal in the dying stages. Truly heartbreaking.

Despite the brutal outcry after that horrific mistake, Bailey was still a respected goalkeeper in the mid 1980’s. Four years on after his FA Cup Final blunder, he was able to secure a Cup medal in ’83 and then again in ’85 solidifying himself as a great United shot-stopper.

However, even though he had medals to his name, a serious knee injury in 1986 in preparation for the World Cup, took him out of commission. Bailey would never fully recover, and would retire shorty thereafter. After working his arse off to feature in the national team fold, he was never able to make a claim for himself with Peter Shilton and Ray Clemence ahead of him in the pecking order.

Bailey worked hard to enter the England squad, and ironic enough it’s where his career ended. However the motivation that he continues to have to this day is nothing short of astonishing. After giving himself one year at United, and eleven months already passed before he was given his first opportunity – he never gave up.

Bailey came shockingly close to stepping away from the fold at Manchester United, but his perseverance payed off – well, it has a lot to do with perfect timing as well. Imagine this – mentally preparing yourself to step away from the world’s largest club, then the next moment being told by the manager you’re playing in front of 80,000 at Old Trafford the next?

That’s football. A series of chances, that are either taken brilliantly or dropped. Gary Bailey’s career is a perfect example that a little known footballer can become a Manchester United player in a matter of weeks. More importantly, Bailey offered us insight into a footballers life, the ups, downs and in-betweens. You can have a brilliant game, and drop a clanger – everyone’s either on your back, or hoping to be driven towards victory.