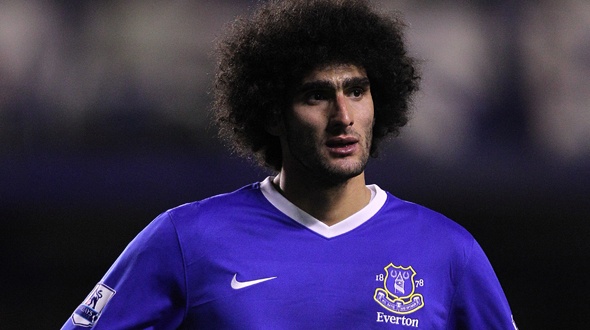 If you’re a numphy, break out the wig. Marouane Fellaini is ready to throw on the Manchester United shirt.

The Belgian has already begun to spurn on his new teammates to challenge for the Premier League title as the 25-year-old indicated “it will be tough, every year is tough for the big teams but I think Manchester United has the quality to win the championship so I look forward to this.” As clubs like City, Liverpool, Arsenal, Chelsea and Tottenham strengthened during the transfer window, United will be hard pressed to challenge for their 21st Premier League crown.

The experience is there, and despite a heart-breaking defeat at Anfield last weekend, it’s only upwards for the reds. As Fellaini rejoins his former boss, his promising performance for Belgium against Scotland this weekend shows that United’s prayers may just be answered.

Yes, we cannot sit here and say he’s “the next Roy Keane” but we’ve missed a debilitating tackler and hard-nose defender. Credit to Michael Carrick his stellar sturdy play in the center of the park, but now he has a partner in crime.

And with a move from Everton to a world renowned club like United, Fellaini understands that there will be a learning period. The Belgian explained: “It is a big step for me. But I have played five years in England, I know the league and I know the players so I don’t think I will have a problem with this move.” The move will certainly ask questions how quickly he can gel into the squad, with his first Premier League match for United looking to be slated against Crystal Palace on September 14th. With the Manchester derby around the corner, David Moyes will look to his former Toffee to ignite a fire in midfield with tackles, and his aerial presence.

“I was a little bit nervous on Monday but in the end I have my transfer and I have won with Belgium so I am happy.”

As he continues to excel in the midfield, we can hope he will be our rock alongside Carrick for years to come. Will he be what Keane once was? Well, the no nonsense commitment is evident but to be half the player Roy was would be an achievement.