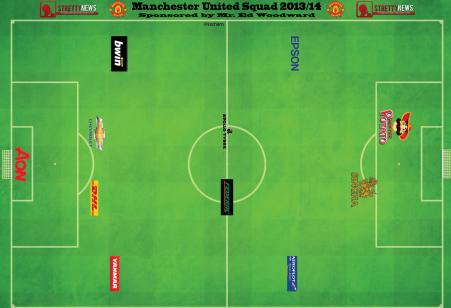 It would be pretty safe to assume that the majority of Manchester United fans were appalled about the way Ed Woodward went about his business during the transfer market. The qualities of the linked players diminished by every attempt we tried to sign someone. It was great at the beginning when we were linked with players like Febregas, Thiago and later on De Rossi, Ozil and many other big names. Fact of the matter is, at the end of the day we signed one player.

Ed Woodward, the man who took over from David Gill has failed to impress. He has shown more interest in bringing in sponsorship deals than bringing in actual talents. Some say he just follows the orders of the owners. Others like Mike Phelan came out to say Ed was always on the commercial side of the club and focused on “bringing the money in and not involved with spending it.” Me? I just think he wants to see the following line-up start at Old Trafford.

Born and raised in London, Aon has been involved in the British game since he first started playing the beautiful game. However, his contributions to the “multinational football” has made him the experienced keeper that he is today. Aon comes from a family with a long line of footballers, including the famous “Ryan Insurance” – his father.

Japanese international and legend Yanmar has always been seen as a diverse player. Born in Osaka, Japan, Yanmar played the majority of his football in his home nation. His eagerness to ‘move forward’ and join the attack makes him one of the best modern full-backs in the game today.

Strong competitor, fierce leader and most of all, an impactful member of the squad, DHL has made his position his own since coming to the club. The German international has been well known around the globe for the ‘indestructible’ defensive partnership he has developed with Chevrolet.

Chevrolet played a huge part in developing football in his home nation; USA. He has been widely credited for maintaining the same level of fitness and concentration throughout his career and for bringing international success to the United States. Chevrolet earned his regular place in the starting line-up after forming a strong partnership with DHL.

Never afraid to go forward and take his chances, BWIN has also been one of the great left-backs in the modern game. He is not only limited to strictly defending but seen going forward and whipping in those all-important crosses into the penalty box. BWIN’s deadly crosses have been converted to goals by the United forwards, it is extremely hard to bet against his abilities.

Versatile, quick and tricky, this Russian born winger is one of the top 5 fastest players in the world. He has retired from the international game and is now focused on his club career. Good news for us.

Brought into the club by Mr. Woodward, because he obviously thought Federal is the answer to our midfield problems, Federal Tyre is yet to play for United.

Also another addition to the club that is yet to feature, Apollo is the second player brought into the club this transfer window. Amidst concerns of not having a dependable CM at the club for the past 5 years or so, Ed Woodward has dropped this bomb, making every supporter believe in the abilities of the new man who took over from Gill.

The old head, the calm and composed one. Epson has been in the game for a long time. He contributes to the club in more ways than one can print.

The fast and fearsome beast playing just behind the main striker, Singha brings the physical strength needed upfront. Certainly lives up to his name as in many languages in the Asia, Singha means Lion.

Oh Mister Potatooooo! The new fan favourite has done well at the club since joining from a close rival. Mister Potato has played a major part in last seasons success and is tipped to do the same this time around.

Well, there’s the new and improved side Ed wants to play under David Moyes.