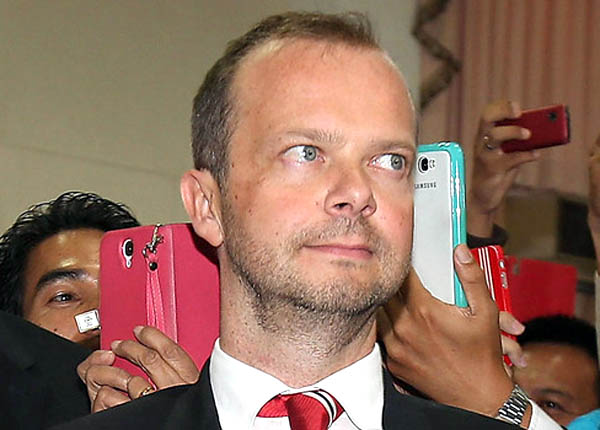 In most walks of life, Ed Woodward, our dithering novice of a Chief executive, and Jim Carrey are virtually incomparable. That said, if you got the Lemony Snicket theme of the piece, both Woodward and Carrey are the baddies.

The squeaky bum time of the transfer deadline day, with us putting up with the effects of Jim White’s excessive Red Bull intake, was a day of pure theatre under Sir Alex Ferguson. But with us comfortably sheltered in front of our TV screens with our feet up, oblivious to the carnage and panic riddled deep into our rivals, in full knowledge that our business was settled, a clear plan in place.

Yesterday, we bought front-row seats to the theatre. We delved into the sweet hell of the transfer free-for-all, penny for Sir Alex’s thoughts as even he could probably see in his morphine-filled state in his hospital bed that we had succumbed to a desperate low- the panacea that is the deadline day buy.

It has been hard enough for David Moyes to fill the biggest shoes any football manager has probably had to fill. When you take the confusion and horrifying transfer farces into consideration on top of replacing the godfather of management, this summer has been nothing short of turbulent.

And it is down purely to the sheer inadequacy and incompetency of our number crunching chief executive. Woodward is to blame, simple as that.

I hate to speak so ill of the club that I have loved all my life and always will, although I am one of the younger generation who has been safely ensconced in the Sir Alex Ferguson bubble since I wore my first United kit, even those fans whose support predates that of mine have admitted they have never seen our great club stoop to such embarrassing, desperate depths of the yesterday’s deadline day. Thanks Mr Woodward.

The bedlam and uncertainty has set in ever since the dynamic duo of Ferguson and Gill said their fond farewells. Before David Moyes had the chance to set out his belongings and put his feet under the table, there was the cold reality that replacing these two United monsters would be a Herculean task at the best of times. Yet the chances to back the manager with his desired players have been spurned. We were looking at the top echelon of the transfer market, we had a golden chance to deliver a prized asset, that marquee signing to really give a signal of our intent, the chance to give Moyes the best fighting chance to really set out his stall at United. Instead of buying our food fresh, we waited til the ‘reduced to clear’ signs were up at 10pm when most of the items available are stale. Stale is a pretty good summation of our transfer activity as a whole. Cheers Woody.

It started with our pursuit of Thiago Alcantara. Despite all the claims we were not in for him, it was blatantly obvious we were. He was the steal of the summer- young, creative, potential to improve, all for around £18m, what is not to like? From the outset, Moyes was hellbent on securing a like for like Paul Scholes replacement, Thiago fitted that bill. It is believed everything was in place for a deal, except we went penny pinching at the last. Guardiola, his father-like figure, smelt blood. Once they pulled out all the stops to take him to Germany, that was that. The opportunity to sign one of the world’s brightest young talents had gone begging. That miss will haunt us big time in the coming years.

Then we turned our attention to his team-mate Cesc Fabregas. He had come out previously saying he’d only leave for Arsenal. Knowing we would have to pull off something miraculous to nab him, what did we do? We dipped our feet in and only offered £25m then £28m. Totally derisory and risible sums for a player of genuine quality who would’ve taken some persuading to leave his boyhood club, but way to go to making him feel wanted Woody! Every player has their price, but those offers were delusion personified.

Yesterday’s farce with poor lad Ander Herrera should never be associated with a great club of ours. The guy was willing to take a substantial pay cut to make his move possible, that in itself is a rare commodity. Yet to see the move collapse in the shape of pranksters representing our “delegation”, what must the football world have been thinking? This is Manchester United for god’s sake! The image of our club has been severely tarnished within the space of a few months, why would Herrera want to negotiate with us again after that circus? Where was Woodward? He probably left his cheque book at Manchester Airport. That could be the only reason why you would try and negotiate a non-negotiable buyout clause.

The irony in all this is that we were once again penny pinching by only a few million, something which we actually used to in our bittersweet signing of Marouane Fellaini. Ever since Moyes stepped foot in the Old Trafford doors, the rumours straight out of the blocks were Baines and Fellaini to follow Moyes. If we were so keen on signing the Belgian, why meddle and put it on the back-burner until just minutes before the window slammed shut? We had the glaringly obvious opportunity to sign him for £23m until August, if we’d have done it then, he’d have already got accustomed to the United ethos and his team-mates, and we may not have lost with a whimper at Anfield on Sunday. Fellaini would have offered the midfield bite and goal threat needed in the hostilities Anfield provides during their ‘cup final’. Fellaini was obviously the safety blanket contingency plan if the bigger deals went tits up, but if beggars belief why we would overpay that clause which had been long standing. Either we were penny pinching or plank Woodward failed to acknowledge that there was such a clause in the Belgian’s contract. My guess, although a tough call, is the former- considering that our initial joint offer for Baines and Fellaini was around £28m, only £500,000 more than what we inexplicably coughed up for Fellaini. The whole window lacked ruthlessness and a clinical edge, a rather worrying sign of things to come unless someone wobbles Woodward’s pickled brain. Fellaini should have been through the deal alongside Moyes, everyone can see that.

Before we eventually signed Fellaini, the only big name signings were with noodle and tyre companies, oh and getting Google+ and Instagram of course. Woodward has made his name on the commercial side, but companies would be foolish to distance themselves from the great name of United, with that in mind, securing sponsorship is hardly the most arduous of tasks when it comes to the greatest club in the world.

The night was summed up by fleeting rumours that the paperwork for Fabio Coentrao’s loan was not sealed and signed in time. Although it has now turned out that Real Madrid were hardly saints in this deal, the recurring point of why wait til the latest possible minute to do business is still valid. Someone ought to tattoo the message ‘DO BUSINESS EARLY’ in indelible ink, otherwise the next few windows could be painstakingly grim.

Once Sir Alex has come out of his hospital slumber and has a fully functioning hip, he ought to give Woodward the biggest hairdryer treatment of them all, seeing as he is on the board of directors. No-one deserves to hear his wrath more at this moment. After all, his partnership with trusted lieutenant David Gill was clinical and decisive for the most part. Moyes-Woodward does not have the same ring to it. Yet….

Gary Neville summed up the transfer window in a typically well-worded tweet 12 months ago,

what the transfer deadline gives you is a clear indication of which are the badly run football clubs.

In that context, it would have been flabbergasting to see United classed in that mould under Ferguson and Gill, but there we were yesterday right until the death.

It seems as though it’s not only Moyesy who has big shoes to fill, our transfer shambles this summer has been a rude eye-opener. The harshest lessons will hopefully have been learnt, for our sake.

One response to “Ed Woodward’s ‘A Series of Disastrous Events’”