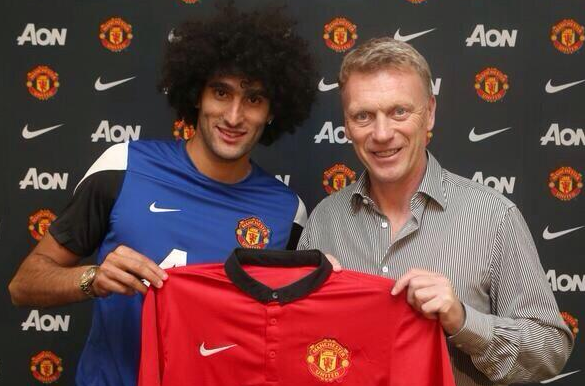 Marouane Fellaini jumped at the chance to work with David Moyes at Manchester United.

It was after 2am on Tuesday morning, three hours after the transfer window had officially closed, that the champions confirmed the £27.5million deal had finally been finalised.

Fellaini first joined David Moyes at Goodison Park in September 2008, when he joined Everton from Standard Liege. Five years later they both link up again at Manchester United.

“I have known the manager for many years now and I have a lot of respect for his way of working.

“When I was given the opportunity to work with him again, I jumped at the chance.

“I had a fantastic time at Everton and I’d like to thank all the fans and staff there for everything they have done for me.

“But being a Manchester United player is something that every player dreams of and I believe that I can make a real contribution to the team’s efforts to win trophies in the future.”

Moyes kept it short and sweet, referring to the five years he spent working with Fellaini and how he is delighted to have him at Old Trafford.

“I have worked with Marouane for five years and I’m delighted he has decided to join Manchester United.

“He is a player with great ability and strength and I think he will make a real difference to our squad.”