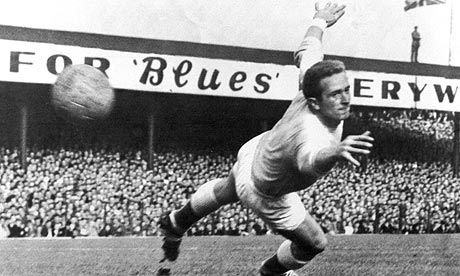 Often times football supporters and myself included, neglect to remember footballers for their off field achievements. Instead we remember the historic goals like Giggsy scored in the ’99 FA Cup against Arsenal, or Eric Cantona’s kung-fu kick in the crowd. However, Harry Gregg may go down as Manchester United’s biggest legends not for his presence between the sticks but, for his support and heroism on the disastrous night in Munich.

Born in October 1932, the now 80-year-old lived through the horrendous Munich air disaster which destroyed the lives of countless Busby Babes. The Northern Irishman played for United from 1957-1966 and is remembered not for his achievements between the pipes in United’s net, and instead his heroism to return to the disaster to fetch teammates, loved ones, and total strangers reigns supreme.

The thrilling story of Gregg’s sublime act of courage on the cold, and icy evening in Munich brings a tear to your eye. Whether a firm supporter of Liverpool, Arsenal, City or Nottingham Forest – players and genuine people throughout the world had to feel for Manchester United. Dubbed the “Hero of Munich” to this day, Gregg remains as modest as ever, proclaiming he’d of thought any of his mates would have done the same for him.

Aside from the disaster, Gregg was one of the best goalkeepers United ever had. Unfortunately for him, Gregg never received a medal after missing the 1963 FA Cup Final due to a shoulder injury. During his hay-day, he was the most expensive goalkeeper valued at 23,000 pounds. And again, as he dove expertly well across the mouth of United’s goal – he dove even farther in Munich.

George Best said “bravery is one thing but what Harry did was about more than bravery. It was about goodness.” From the bottom of his heart, the true gent went towards the fiery mess to once again, answer the call of duty. As many of his young mates lost their lives on European Airways Flight 609, he aided those who were unable to help themselves. Gregg was the glue on the field that held it all together – and fortunately for him, he was able to bring some, but not all, of his teammates back into the world.

Yet, the humble man that Gregg is he explained “I am not John Wayne, I have never been John Wayne, I don’t want to be John Wayne.” Understandably, being coined a hero after many of your mates passed, Gregg wanted none of it. Especially after one of his best mates, Duncan Edwards, seemed to have made it through into recovery. Only to find out, 10 days after the Munich air disaster, Edwards passed away – a time in Gregg’s life which halted the recovery process after his close friend passed over.

Countless stories reliving the horrific scene have spewed from Gregg’s mouth, each one touching closer to the heart every time. As he pulled teammates from the blazes in Munich: Bobby Charlton, Jackie Blanchflower, and Dennis Viollet – he also helped the injured Sir Matt Busby. Much like today’s modern acts of terror, or disasters plague our society there is some sort of silver lining, whether good conquers a time of despair. Manchester United lost many greats in Munich, some of which were fast-tracked to greatness, sadly enough to be cut too short. Manchester United’s “Superman” rose to the occasion on that fearful night.

2 responses to “Remember, Harry Gregg? The hero of Munich”