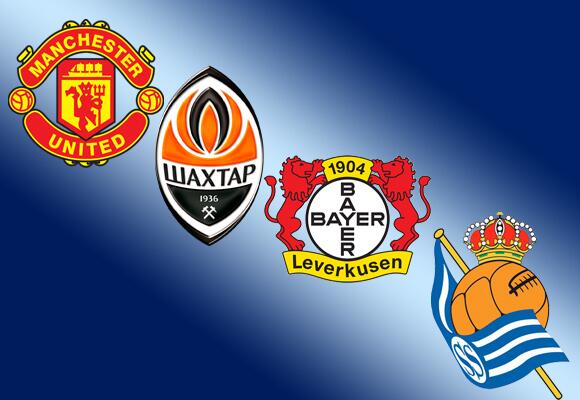 On paper before the draw, there were some fearsome potential opponents that could await United. As the draw concluded, the general feeling was, whilst there are potential banana skins it was a decent draw which could have been a lot worse.

We will pit our wits against Shakthar Donetsk, Bayer Leverkusen and newcomers Real Sociedad.

Shakthar is not the easiest of ties, just ask Chelsea who fell foul to the Ukrainians last season. They boasted a ridiculously impressive unbeaten home record in Europe, going over 30 games without defeat. However, they have been depleted with the losses of some key players. Willian, the transfer whore, has finally put pen to paper with Chelsea. Henrik Mkhitaryan was courted by Liverpool before becoming Mario Gotze’s replacement at Borussia Dortmund. Fernandinho is of course across the city with the blue lot. This trio were the cornerstone to much of their success last year. The main problems will be a hostile Ukrainian atmosphere and clocking up the air miles in an energy sapping flight.

Bayer Leverkusen, managed by ex Liverpool captain Sami Hyppia, have also lost their star man, once again to Chelsea in the form of Andre Schurrle. However, the Germans are always fiercely competitive and difficult opponents and possess some very capable players such as Renato Augusto and Stefan Kiessling. Leverkusen have proved to be our nemesis in the past, knocking us out on away goals in 2001, progressing to the final at Hampden Park in the process, when Dimitar Berbatov was pitting his wits against us.

Sociedad are somewhat of an unknown quantity but should not be underestimated. They are a young side intent on playing attractive football. Their calibre can only be highlighted by them receiving top dollar for Asier Illarramendi from Real Madrid. Carlos Vela has proven to be a hit, they process a very precocious talent in Frenchman Antoine Griezmann and have recently acquired Esteban Granero from QPR on loan.

Although the group doesn’t initially appear too daunting, there are some tricky fixtures in store and David Moyes will have to be guarded in his first Champions League campaign. Considering what could have been, we should have the quality required to comfortably progress from Group A