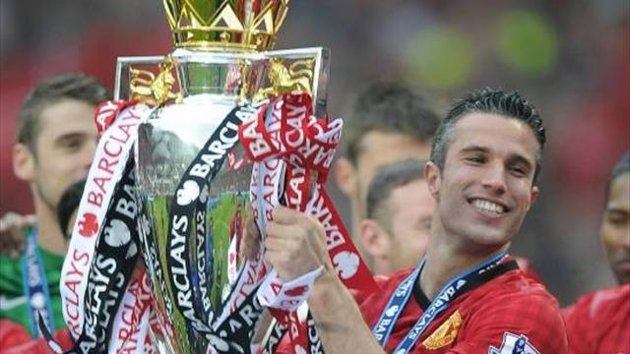 Personally, picking Manchester United to win their 21st Premier League crown is a no brainer in the sense that, I’m a red. Allegiances aside, the league crown is wide open this year with Jose Mourinho’s return, and Manchester City looking fairly decent under Manuel Pellegrini [submit joke about their loss to Cardiff here]. Overall, with the top four to be hotly contested, our historic club has a few factors which sky-rocket our chances of reclaiming Premier League glory as opposed to our oil-rich neighbours, and the so called “chosen one”. David Moyes is a few matches into his official reign as United manager and, thus far, has looked as Ferguson said – a natural replacement.

Aside from Moyes, the men in his squad are full of potential, regardless whether or not any signings are made late in the transfer window. And as my heart likens to the idea of seeing our captain, Vidic, lift another domestic crown – I’m left with a few key factors which will propel is past the competition.

The Legacy of Sir Alex Ferguson

In any job, especially football, 26 years in charge is a feat in-and-of-itself. Ferguson is now upstairs watching over United with a glass of Casillero del Diablo only a phone call away from Moyes. Fergie will not pull what Ron Atkinson did, in coming back from retirement, and instead will provide for a more nurturing sense of the club. In preseason we saw absolute nitwits call to axe Moyes after losing a few meaningless pre-season matches, but where are they now? Moyes’ boys added a FA Community Shield and an opening day victory over Swansea City – quite a memorable victory mind you. Ferguson left behind a squad full of potential for the present time, and the future. Rafael da Silva, Jonny Evans, Chris Smalling are a few names whom are natural successors to Ferdinand, Vidic, and Evra. Although United will need to find another DJ when Evra decides to depart. Baines, as far as I know, has a good taste in music.

The wondrous mix of young and old within the reds ranks is astonishing. Whether or not every member of the first team and reserves will pan out to becoming a United player through and through remains to be seen, but look how it all turned out for Danny Welbeck. What we have now, what Moyes has, is a club rich of tradition. Some indicate that the pressure of winning passed on from Sir Alex to Moyes is beyond imaginable; however, I disagree. The exact pressure is what will allow Moyes to thrive: the former Everton manager is well-versed in the English game already, and the willingness from the United squad to perform under the Scot is a bit I’ve personally taken a liking to.

Winning silverware, and finishing atop the league both domestically and throughout Europe is desirable. If Moyes can bring us success, which is relative mind you, support will naturally be given. In the end, it’s a process. Just as Ferguson walked into a new environment nearly 27 years ago, Moyes now faces the same sort of challenge. However, with modern day egos, wage expectations and media input – Moyes may indeed have an even more daunting task. Regardless of the challenges ahead, there is no question the trust has been given to our new man.

One of the best decisions Moyes has made in his young United career – is appointing current and former reds, Ryan Giggs and Phil Neville as first team coaches. As Neville was around the block with Giggsy during his time at Old Trafford (1995-2005) he’ll offer a good understanding of the rich tradition. With ten years of service to the club, the first step in his management career (currently holds a UEFA B License) he certainly knows the in’s and outs of United. Neville offers the happy medium between Everton and Manchester United, too. David Moyes has his own system which he brings to United, and Neville understands that readily having played under the Scot for seven years. In turn, the relationship with the elder players at the club like Rio and Giggs in particular, aids in the understanding between the players, and management.

With ever-lasting success on their minds, Neville also brings the unique link to the Toffees’ players – in particular potential signings of Leighton Baines and Marouane Fellaini. Have we another fantastic number seven in Fellaini on our hands, or is that reserved for Cristiano Ronaldo? Time will tell.

When thinking of an iconic face of Manchester United over the past two decades, Wayne Rooney initially comes to mind – but with his recent spats that is somewhat of a suppressed name for the time being, at least. Instead, Giggs who’s been a servant of the club rings as a true red. The inclusion of Giggsy as a player-coach after Paul Scholes temporarily turned down the position, is a match made in heaven. The hard pat on the back of Rooney’s head upon his injection into the Swansea match coupled with an almost blank and frustrated stare into the soul of Rooney brought hope to my red heart.

Upon waking up every morning, I envision Giggs brush that mane of a chest o his and then kiss our beloved crest. First and foremost, the 39-year-old is there to connect Moyes to the players but, in reality Giggs serves as one of the remaining original ambassadors left of the Ferguson era. With a trophy cabinet more expansive than Roberto Mancini’s time at City, the natural red is a legend.

The flying Dutchman, more like our Superman. After one season playing for United, the goals he scored were absolutely stunning especially the hat-trick against Southampton. RvP offered the cutting edge that United lacked last season and almost single-handedly brought the league crown back to Old Trafford. A man who seems to score on every match day that Arsenal struggle just to remind them of what they’re missing out on, is the talisman Manchester United needed for awhile. His ability to finish with either peg and ability to lull defenders to sleep allows players like Javier Hernandez and Danny Welbeck especially, to soar to new heights.

An excellent role model to Welbeck, RvP brings composure and a sense of calm to a frantic time in United’s history. Plenty of questions have been asked about Moyes’ intent at the world renowned club, and RvP without question answers any of the doubters – with goals galore. Four goals in two games – two at Wembley and two at Liberty Stadium indicate that his second season with the reds will be just as fruitful as the first. Although spreading the wealth to all our strikers would be somewhat ideal, if he continues to stay fit and bag goals quicker than John Terry does teammates wives – then we should be in for a treat.